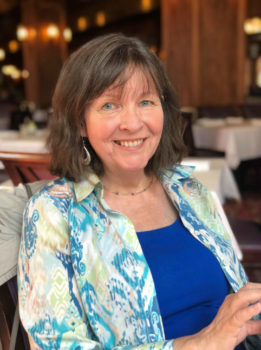 I am a full-time, second generation, award-winning & enthusiastic Los Gatos real estate agent, serving this town and the county too – a Silicon Valley Realtor. Real estate was my second career after I’d worked happily in the area of religious education (in Catholic high schools) & ministry for several years. Economics necessitated an employment change, and real estate was a natural fit as it really is a “helping profession” and I’d grown up with it. I like to joke that my first words were “raised foundation”.

An area native, I was raised in Santa Clara and Saratoga, graduating from Saratoga High in 1977. As an adult I lived in several parts of the valley, including 10 years in Cambrian Park, and since 1999, in Los Gatos. Over the years I’ve also spent extensive time in Campbell, Almaden, and many parts of the West Valley.

I hold a Bachelor of Arts from Gonzaga University in Spokane (a Catholic university run by Jesuits – in Religious Studies, 1981) and thanks to my parents’ generosity, was able to enjoy a fabulous Junior year abroad at Gonzaga-in-Florence, Italy (1979-1980), which cemented my love of travel and all things Italian. (With some refreshing, I can still manage a simple conversation in Italian – which is fun!) After some teaching, I earned a Master of Arts (in Systematic Theology, 1986) from The Graduate Theological Union/Jesuit School of Theology at Berkeley.

Afterwards I returned to teaching religion in Catholic high schools, a very rewarding career, for a few years, until our children came onto the scene. I did a lot of related volunteer work too, with my favorite being as a volunteer chaplain at Good Samaritan Hospital in the early 90’s. Additionally, I worked in the Rainbows Program at our parish, St. Mary of the Immaculate Conception in Los Gatos. Rainbows is a peer-to-peer ministry/support group for kids suffering from any major loss, such as the death of a parent or divorce.

My husband, Jim Handy, analyzes the semiconductor market. He grew up in many places due to his father’s line of work and speaks French and he too loves to travel; eons ago we honeymooned in Tahiti on Bora Bora where he got to practice his language skills (between their Polynesian French and his Belgian-Swiss-American accent it got interesting at times). We have been very happily married since 1985. Jim was a Parks Commission volunteer in the Town of Los Gatos for years, and even now, long after he’s left, he has his ear to the ground on that topic – I get a lot of interesting information about the town’s doings from him! 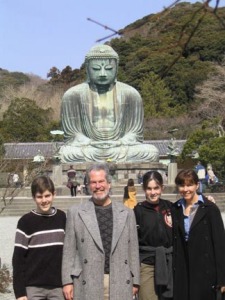 Our two children, Brian & Clair, are now adults. Real estate was as inescapable for them, as it had been for me, and when Clair was in second grade she said, “uh oh Mommy, we have termites!” correctly spotting the telltale drywood termite pellets on our hardwood floor; I suspect she was the only second grader with the ability to correctly identify termite activity. She is now licensed and works along side me. So, real estate is a little contagious!

Like their parents, they love to travel and together we’ve been in much of the US, plus parts of Mexico, England, France, Switzerland, Italy, and Japan. Brian is now a newly minted grad from USC in Los Angeles with his Master of Fine Arts in Interactive Media and Video Games, having graduated after four happy years Loyola Marymount University in LA and prior to that, at Bellarmine College Preparatory in San Jose. Clair also graduated from LMU in LA and Notre Dame High School in downtown San Jose, she has returned to the South Bay and received her California real estate license to join me in the business.

I hail from a large and loving extended family and it’s a very tight-knit group. In my free time, I enjoy keeping in touch with them and with many old friends (who feel like family) – and actually many friends and relatives become my clients, just as my clients often become my friends. In recent years, that’s meant a lot of time with older family members- something possible with a real estate career.

I try to put a priority on family visits and reunions. (And I have spent a lot of time at relatives’ retirement homes so earned my designation as a Seniors Real Estate Specialist). My siblings & many other relatives come here to visit often and I’m happy that usually they stay at my house. As one cousin said, “sometimes it’s as if you have a revolving door at the front of your house: just the way you like it!”
Mary Pope-Handy
408 204-7673
mary (at) popehandy.com
Realtor, ABR, CIPS, CRS, SRES
Sereno Group, Los Gatos
Serving Santa Clara County: Los Gatos, Monte Sereno, Saratoga, Campbell, and San Jose (Almaden Valley, Cambrian Park, Willow Glen) and nearby
California Department of Real Estate license # 01153805

Hobbies include enjoying walks in the neighborhood, Belgatos Park, and throughout the San Francisco Bay area – usually with camera in hand and blogging ideas being created! I love to write, hence the huge number of blogs, and wonder if someday I might write a novel. Photography, live music, and travel are all top hobbies too. I often enjoy the Almaden Music in the Park or any of the Los Gatos musical events. In 2016, I was over the moon to hear Andrea Bocelli perform at the SAP center in San Jose.