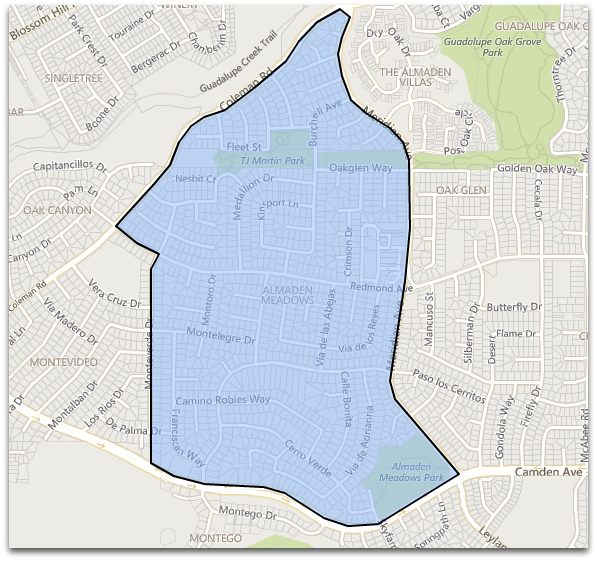 The scenic, tidy Almaden Meadows neighborhood, just behind Almaden Meadows Park in San Jose, is one of the larger communities within the Almaden Valley. It includes 1176 single family  homes (no condos, no townhomes). TJ Martin park runs near the top of the community, so there are plenty of places to get out and be active nearby! Drive down any of its streets and you’ll find that many are tree-lined, and in nearly every case, the road is not crowded with cars. It’s a very pleasant sense of un-crowding.

Where is the Almaden Meadows neighborhood?

Almaden is a “long” community, but this area is not deep into the valley, but closer to Cambrian and Los Gatos. For commuters, this is a big plus as it’s that much faster to get home.

If you can picture Coleman Road and Camden Avenue coming together in a bit of a “V” formation, Almaden Meadows would be nestled into it, except at the very base of the “V”, which would hold the Montevideo neigborhood.

Put another way, it’s east of Monteverde, south of Coleman, north of Camden and west of Meridian.

From this community, it’s a quick jaunt to get over to Oakridge Mall or nearby areas along Blossom Hill Road. There’s an abundance of restaurants, shopping, and entertainment nearby. Entertainment options include miniature golf, bowling, and a large movie theater at the mall.  Additionally, it’s not far from Lake Almaden.

Which public schools serve this community?

Schools for this area are mostly in the San Jose Unified School District, but one corner (north of Redmond and up against Coleman but not quite as far as Meridian) is in the Union School District and Campbell Union High School District.

For the Union School District part, the schools are Guadalupe Elementary, Dartmouth Middle, and Leigh High or Branham High – it’s a “free zone” (see the MAP of the CUHSD’s boundaries here:  http://www.myschoollocation.com/campbelluhsd/).

Overall, these schools are all considered good to very good or even excellent – do your due diligence, of course, as every parent may have a different idea of what is good or good enough.

What are houses like in the Almaden Meadows neighborhood?

Real estate prices of homes for sale, or those for rent, vary as much as the home and lot sizes do, so it’s all over the board.  Generally, prices range between about $1 million and $1.65 million, with the low end being for a smaller home, or a fixer, or both.  Looking to buy a normal (somewhat updated, but not fully remodeled) home in Almaden Meadows? A budget of $1.2 to $1.45 mil will work most of the time – as of right now.  For houses sold in the last few months days, the average sold price was just about $1.3 million and the average homes size was 2125.

The average sale price of $1.3 million for the Almaden Meadows neighborhood appears moderate compared to the county and Almaden Valley:

Check out these real estate statistics and trends and many more at my popehandy.rereport.com stats site

The Almaden Valley real estate market, like the rest of the county, is a seller’s market, and this is true for Almaden Meadows also.  The hottest part of that market seems to be the area a little further south, with Bret Harte Middle and Leland High, which both have exceptionally high scores, and consequently also much higher prices.

Almaden Valley is a beautiful area, with the Santa Cruz Mountains on one side and the Santa Teresa foothills on the other. It’s a fairly direct route to downtown San Jose.  Schools are good and crime is better than many areas in the county. The question is often asked by newcomers: why is it so relatively affordable, compared to Los Gatos, for instance?

Right now, most of the high tech workers seem to drive to Sunnyvale, Cupertino, Palo Alto, Santa Clara, and nearby areas (maybe also North San Jose).  Almaden Valley is considered a bit far out for mose of those employees. For example, an evening commute from Sunnyvale to Almaden might be an hour and a quarter or so.  Many people prefer a commute of 30 minutes or less, so this is just too far for them.

However, Google has just announced a major expansion which will be coming to downtown San Jose. It’s a pretty reasonable commute from Almaden to downtown, though, so it may be that Almaden will see more appreciation in coming years as that commute will not be an impediment.

The Montevideo Neighborhood in the Almaden Valley area of San Jose