What is an As Is Sale? 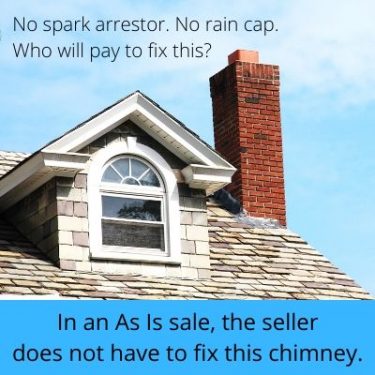 An As Is sale is one in which the seller is not required to make any repairs and underscores that the buyer is purchasing the property in its current condition. In Silicon Valley today, nearly all home purchases are “As Is” and without the current owner providing fixes or improvements to the property.

One small note to the As Is being the norm: in California, the seller is usually obligated by law to have a gas water heater properly braced and strapped, to provide the necessary smoke detectors and carbon monoxide detectors.  (There are very few exceptions for these three items.)

It wasn’t always that way.  My mom was a Realtor and back in the 1960s, when their contracts were short, the one thing that seemed to be included in every sale was that the seller would provide a Section 1 Pest Clearance. If the termite and pest control company found active infestations of wood destroying organisms, such as drywood or subterranean termites, fungus, boring beetles, etc., they had to be eradicated before the sale could close.

Having roof, chimney, or foundation repairs paid for by the home owner was not uncommon, either. After the Loma Prieta earthquake of 1989, for years chimney inspections discovered breaks that required rebuilding the chimney from the roof line up. The seller paid for it most of the time.

This As Is situation being the norm is just a function of supply and demand. If the tables were to turn, sellers would be doing work as needed to get the sale to close.

Purchase agreement forms and As Is sales

We have 2 sets of contract and related forms which are most commonly used in the South Bay and Peninsula: the CAR (California Association of Realtors) and the PRDS (Peninsula Regional Data Service). PRDS used to be the set of forms that agents preferred from Los Gatos and Saratoga up through the west valley areas and into the Peninsula. In recent years, those forms have become far less popular and it seems that the vast majority of Realtors prefer the CAR forms.

There’s a 2106 review of the two sets of forms on a legal site that seems nicely done for those who’d like more info on the comparison between CAR and PRDS.

The CAR forms are based on an As Is agreement, but an addendum can be added to request a Section 1 pest clearance (or other repairs).

The PRDS forms provide an option for the buyer to request a minimum standard. One section of the contract addresses termite & pest work, and the other is an umbrella for everything else. For example, it states that the roof and skylights will be free of leaks and all systems (appliance, fireplace etc.) operational.

In our overheated San Jose area real estate market, sellers are not willing to do repairs, so even if they receive an offer on a PRDS contract that does not have the As Is option checked, it’s likely that it will be countered out, even if the home has no known issues. The fear is that the buyer will get inspections and find a bunch of stuff wrong and the seller has suddenly agreed to a blank check.

Can you do inspections when it’s an As Is sale?

Yes, those are separate issues. With the As Is clause, though, the seller isn’t obligated to fix things.

Does As Is mean no contingencies?

No, those are separate issues. You can have an As Is agreement and still have the right to back out, or request repairs, if you have a contingency for property condition. If you have that contingency, the seller isn’t required to fix things, but you aren’t required to complete the sale if you find a repair issue that the seller is unwilling or unable to correct. It can be negotiated in escrow with no guarantees to either side.