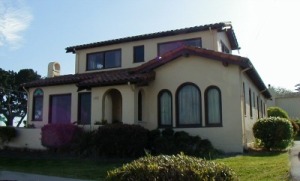 Spanish style houses evoke a kind of nostalgia for “old California”, and when we think of local history, homes with a Spanish type of architecture seem most appropriate, especially if the landscaping reinforces it – things like bougainvillea, hibiscus, ferns, palms, roses and citrus trees.

There are a number of Spanish styles found locally and throughout California: Spanish Colonial Revival, Spanish Mission, Spanish Eclectic, Mediterranean, and Monterey, which is the only archietectural style hailing from California (and admittedly is a hybrid).

Some neighborhoods, like downtown San Jose’s Japantown and many of the older areas in Willow Glen, are filled with beautiful Spanish Revival bungalows which were mainly built in the 1920s and 1930s. The largest collection is probably there, close to Lincoln Avenue and near Bird & Minnesota Avenues, and especially in the “Palm Haven” neighborhood of Willow Glen.

More can be found in the older parts of San Jose’s Alum Rock Park (up by the country club), in Santa Clara’s oldest neighborhood (by the university), in downtown Los Gatos and downtown Palo Alto, more in south county, especially Gilroy, and scattered throughout the Santa Clara Valley.

What about newer Spanish style homes in Silicon Valley?

Too often, the very newest homes don’t seem to know what style they’re trying to reflect at all, but tile and stucco and a few arches are thrown in to attempt something generically Mediterranean. In the last 20 years, many builders have created neighborhoods with varying home styles – the same floor plans but varying styles on the exterior such that one is pseudo Spanish, another is pseudo Craftsman, another is pseudo English cottage or Tudor. Home buyers may get to choose which “style” they want if they get in before it’s built.

Resources for Spanish style homes in the San Jose area

Fabulous books can be found to help restore and remodel these homes. Older houses need remodeling for practical reasons, and the younger ones can benefit from it to make them more authentically Spanish styled.

Meanwhile, if you love Spanish style homes of all ages, you’ll find plenty of classic older ones around here (all pre-1950). Unfortunately this search tool does not allow me to constrain results to the style of home, so there will be some Victorians and Arts and Crafts homes in the mix below.