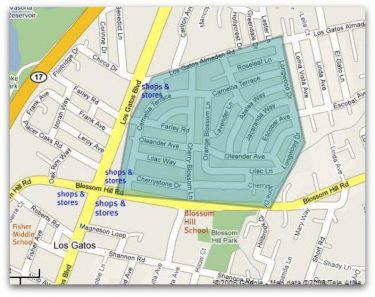 The Blossom Manor neighborhood in east Los Gatos is very popular as it is well located close to the highly regarded Los Gatos schools, great shopping and parks, such as Oak Meadow and Vasona Lake County Park. Further, Blossom Manor enjoys comfortably sized lots with room to grow if a home has not already been expanded from its original footprint.

Most of “the Manor” (originally Blossom Hill Manor, though seldom called that now) is currently unincorporated, meaning it’s not properly part of the Town of Los Gatos, but instead is a county pocket. As time goes by, the incorporated areas are likely to grow and the county areas shrink – a trend we are seeing throughout the Los Gatos area and Santa Clara County as a whole.

A couple of streets, Cherrystone Drive and Lilac Way, are incorporated and share features typically found in incorporated areas: sidewalks, curbs and gutters. Additionally, they share tree lined streets and a small cabana or pool (the Stonehedge Swim Club).

The manor is almost exclusively single family homes (houses) but along Blossom Hill Road and also Camelia Terrace, there are a few duplexes.

The vast majority of houses in the Manor began as small to medium sized ranch style homes.  Over time, though, many of them have either been improved and expanded or fully torn down and rebuilt.  The newer homes often are 2 stories, but not always.

Here’s a little slideshow to introduce you to the neighborhood. Want more info?  Please call or email me today!