An extremely popular and consistently desired Los Gatos neighborhood is Blossom Manor, sometimes called The Manor or even Blossom Hill Manor, which is highly regarded for pleasant, curving streets, close proximity to shops and stores, and the prized Los Gatos Schools.  Today I spent quite a bit of time on my multiple listing service website, MLSListings.com, to pull the numbers on this lovely area and see what the trends and appreciation look like.  I was wondering how the numbers looked at the peak and the trough of the price rollback, whether or not the area has recovered or is close to peak pricing.  For the most part, I looked at all of the houses included in the map area, but also took a secondary study of homes just between 2000 and 3000 sf, since some home buyers seek larger square footage.

Please click on the chart below for the historical statistics, by year, for the Blossom Manor neighborhood – it will open into a new window and become a little more than 50% larger.   It reflects all homes sold, by year, in the Manor from 1998-2012 (averages, medians, as well as some minimum and maximum price info for each year combined).  For this area, the peak of the market, meaning highest sales prices, was in 2007 but both 2006 and 2008 were very close generally, so it was a fairly broad peak.  However, the same is not true for the bottom of the market for this same group.  Instead, there was one very clear low year – 2009.  After that, we see a recovery underway.

Something interesting to note is the increasing size of the houses. The first four years (1998-2001), the average square footage of homes sold was 1778.  The most recent 4 years, it’s 2105, a 327 square foot difference, or 18% more than about 11-15 years ago.  We see a lot of remodeling and additions, so this is in keeping with what locals would expect – and it’s a trend that is likely to continue.  Why does this matter? Upside potential for expansion.

What about homes that are already larger, only those between 2000 and 3000 SF?  (There are only a few bigger than 3000 SF in this neighborhood.)

Here, the height of the market is more clearly defined, or briefer, perhaps – but it’s also fewer homes so perhaps not as reliable as the larger pool of properties sold.  Also of interest is that the low point came a little later, 2010 rather than 2009, for these homes. If we use the charts above, whether the average sales price, median sales price, or price per square footage to determine whether or not pricing is back at the peak, I think we’d have to say that it’s on the right path but isn’t there just yet.

Is Blossom Manor back to peak pricing yet?

If we use the charts above, whether the average sales price, median sales price, or price per square footage to determine whether or not pricing is back at the peak, I think we’d have to say that it’s on the right path but isn’t there just yet.   Depending on which figures you focus on, it may seem that this area is more or less close to being back at peak pricing. The average price per square foot is down about 15-20% from the peak.  The average sales prices are still off, too.  On the other hand,  the median sales price for all Manor homes is now higher than at the peak – a hopeful sign!  But when we look at only the 2000 – 3000 SF homes, that is not the case.  We are on the  right trajectory, and based on the current market momentum, I think it is probable that this neighborhood will get to peak pricing sometime in 2013.

Blossom Manor average price per square foot, per year – looks here like the indicated peak of 2007 is confirmed, but values aren’t quite there yet, though improved from the low of 2009. 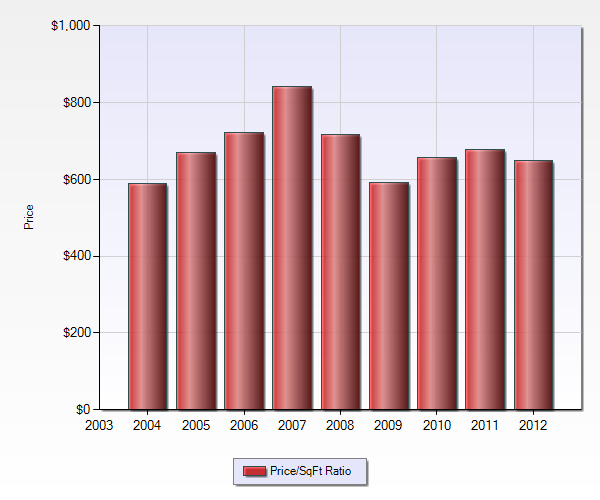 Next, the median sales price for Blossom Manor homes.  Interestingly, this points to recovery.  But the median sales price can fool you: it really means only that half the homes sold for more, and half for less.  So a few larger homes may have sold for more (but bigger places sell for less on a price per SF basis), but perhaps the typical house has not really appreciated. 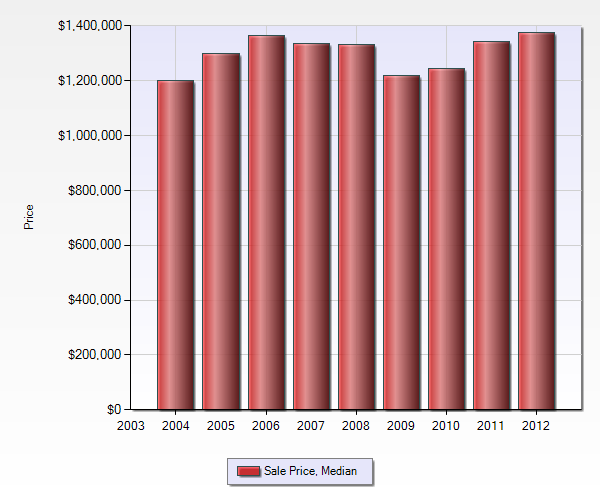 The following chart reflects the average sales price (all sales prices added together, then divided by the number of sales).  2012 was almost the same as 2011, a hair less, but far better than 2009 and 2009 – but not yet to the peak years of 2006 – 2008. I think that 2012 was a little skewed as the bottom three sales were all on busy roads, either Blossom Hill or Los Gatos-Almaden, and the least expensive one was also a short sale. The “interior” homes all sold for more than a million, so it’s possible that if we eliminated the boundary streets and focused only on the interior parts of the neighborhood, we’d see that the trend of increasing sales prices would have continued rather than dropped a little bit in 2012. (In 2011, the lowest priced homes were all interior.) 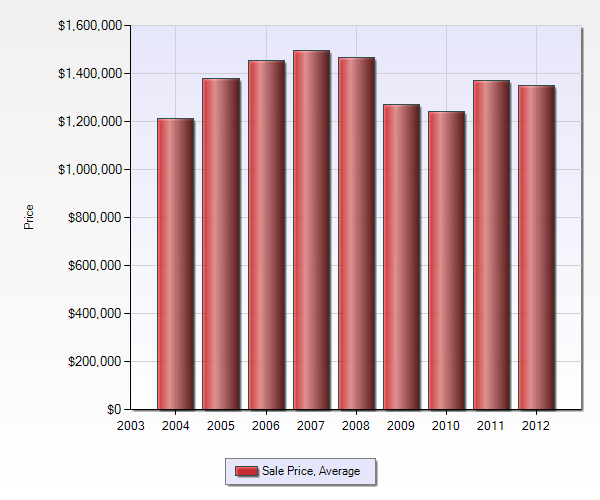 Another consideration is how easy or challenging it is to sell.   The median days to sell – half the homes sold faster, half slower.  By this measurement, homes sold quicker than any time since the peak. Put another way, best time to sell in the last 5 years. 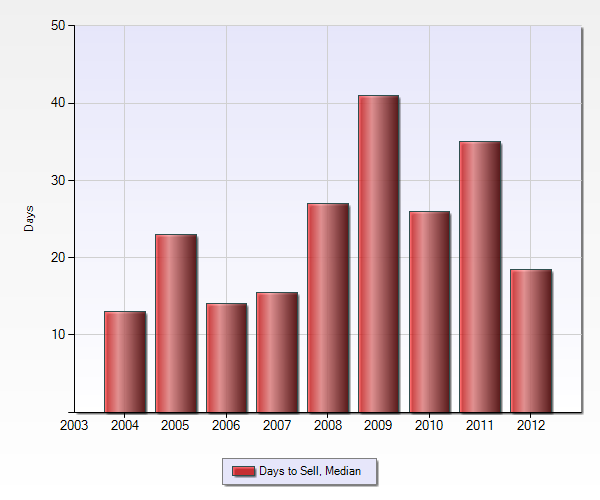 Similarly, the average days to sell points to good selling conditions.  In fact, by this measurement, it’s the fastest time to sell since 2004. 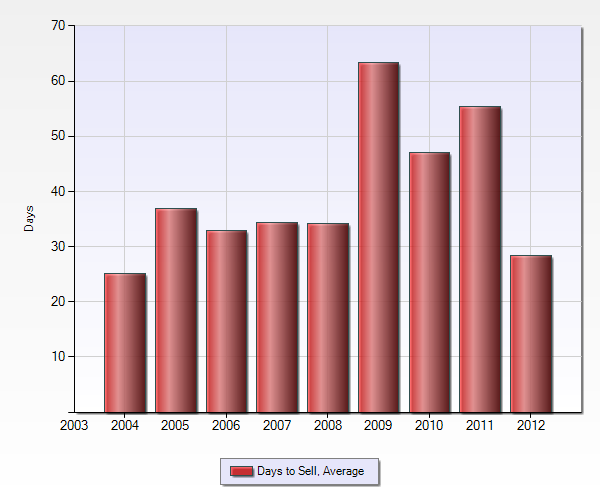 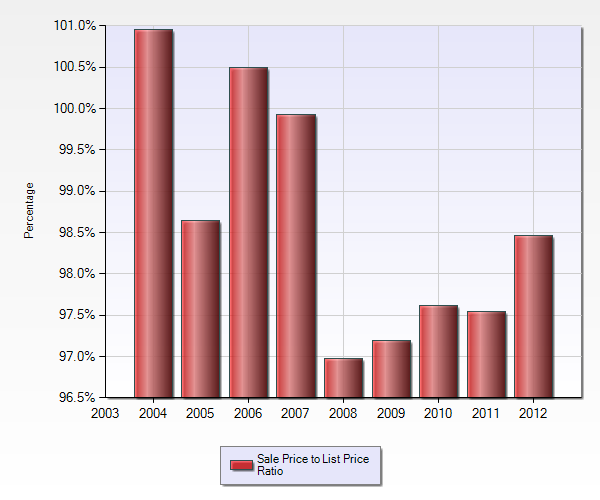 This last graph gives the impression of a fairly consistently improving market.  Inventory remains critically low, so it’s easy to believe that with continuing demand, prices will be rising in 2013.

For more statistics and trends on the Los Gatos real estate market, please click on the link and visit my RE Report, which also covers the Los Gatos Mountains, Monte Sereno, Saratoga, San Jose and all of Santa Clara County, and it is updated monthly.