Cambrian homes near Leigh High School: what can you get for your money? 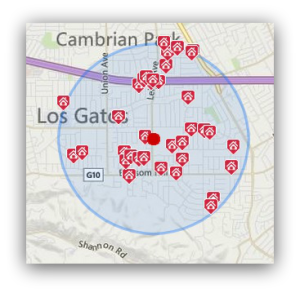 What does it cost to be within a mile of Leigh High School in San Jose’s Cambrian area?  Today I ran the numbers of sold houses over the last 60 days overall and also by price range of $200,000 increments.  Here’s how it looks – averages for regular sales (non distressed, no short sales or REOs) in San Jose 95124 within a 1 mile radius of Leigh HS.

If we pull it apart by price point, it’s a little surprising to find that the amount of house bought at the lowest prices was not that much different from those in the mid-range.  The difference is probably a combination of exact location (being next to Hwy 85, the high voltage lines or on a busier street will pull prices down while having a fully remodeled property will bring it up).  Here are the stats:

What if we look at the same exact area, within one mile of Leigh High School, but at properties within the town of Los Gatos?  Usually those houses are on larger lots and are closer to the hills, but even on side-by-side houses where one’s San Jose 95124 and the other is Los Gatos 95032 there is usually a jump of 3-5% to have the Los Gatos address. For this same 60 day period, there are just 9 houses in Los Gatos which sold (regular sales, same criteria).  None were under a million dollars (range $1,049,888 to $2,062,000).  The averages for the Los Gatos properties are as follows:

Probably the best comparison between Cambrian and Los Gatos pricing would be the side-by-side sales, but we do not have any at this time.  Next best is the most similar home and lot size.  San Jose parcels are almost always smaller than those in Los Gatos, but if we get close (7000 SF in SJ and a hair over 8000 SF in LG), it looks like a house in San Jose of about 1550 SF would run around $900,000 and the same house in LG would go for about $1,150,000.   If you’re willing to go smaller or do more “sweat equity”, you can probably pay less. If you need an absolutely turnkey home, you’ll need to pay more – no matter which zip code you’re in.