Cambrian Park is a very desirable part of San Jose and the greater Silicon Valley due to its great schools, low crime, proximity to Los Gatos and the general “west valley” area of Santa Clara County.  It’s more affordable than the tonier areas right up against the foothills (for the most part, Cambrian is in the flatlands, though one corner is in the hills snuggled between Los Gatos and Almaden Valley).

This San Jose district is also a fairly good indicator of how the rest of the valley is doing, so even if you aren’t a resident of Cambrian Park or don’t want to own a home there, it’s helpful to keep a pulse on it.

A disclaimer: Cambrian Park has micro markets, just like everywhere else.  The “zone 14” includes three school districts (Union, Cambrian, and San Jose), two zip codes and a fraction of another (95124, 951118 and a sliver of 95008) and the borders are messy with Willow Glen, Campbell and Los Gatos in places.  So this is an overview of the region and may not exactly reflect what’s been happening in your precise neighborhood.

Pricing is usually the single biggest question that homeowners have – they want to know if they have any equity: “what’s my home worth?”  In the Cambrian area of San Jose, prices have been declining for a couple or three years, but that phase seems to be over (the peak of the market was late 2006 to early 2007 and prices in Cambrian have now “rolled back” to about 2000-2002 levels in many areas, but some only to 2003 levels).  The low point seems to have been in January, with prices rising since then. Currently, the median sold price of single family homes in Cambrian is down 24% from two years ago (but it was even more 6 months ago). Of course, the dead of winter is usually the time with the least inventory but the best prices, so it’s possible that what we are seeing is only seasonal. We will get confirmation one way or the other soon because prices usually begin tapering in late summer. If prices continue to rise (which I suspect they will as I am seeing so many multiple offers), this will be an indicator that the Cambrian Park real estate market is indeed recovering. 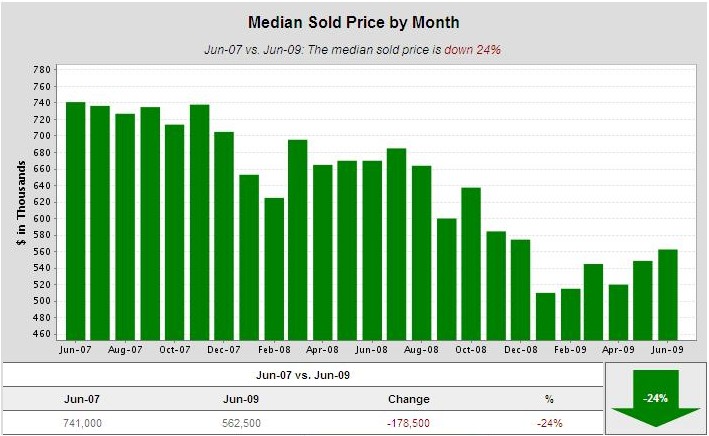 Condos and townhomes in Cambrian – the median sold price is down 45% over the last two years! The worst point was in February this year. 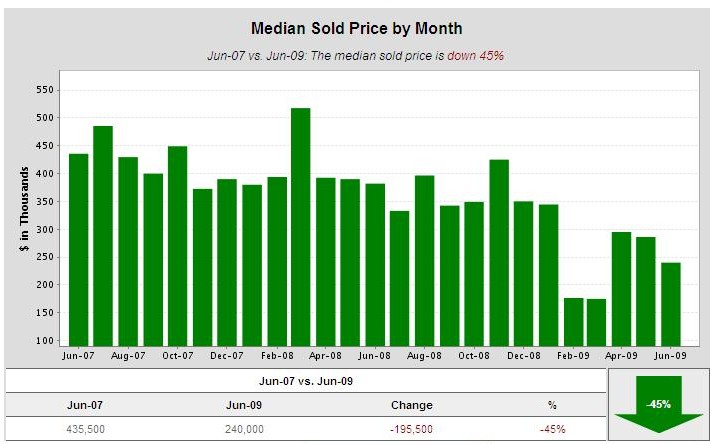 Supply and demand is what it’s all about – the low prices combined with great FHA backed financing and the $8000 first time homebuyer credit and fueling fence-sitting buyers to jump into the market in San Jose’s more affordable areas such as Blossom Valley and Cambrian Park. 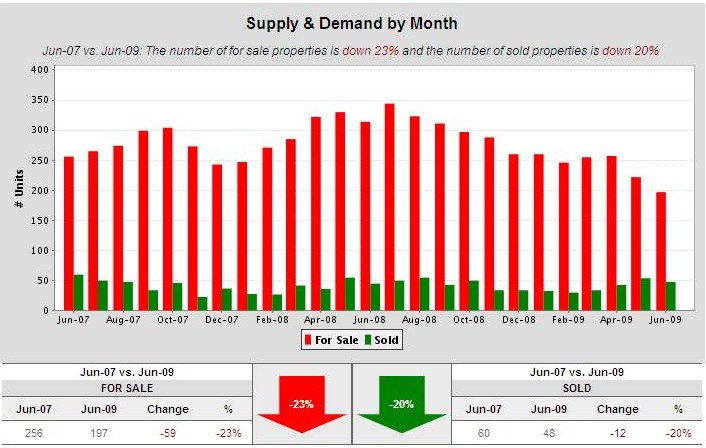 Fewer homes are selling, but far fewer are listed, too.

Next, supply and demand for condos in the Cambrian Park area of San Jose: 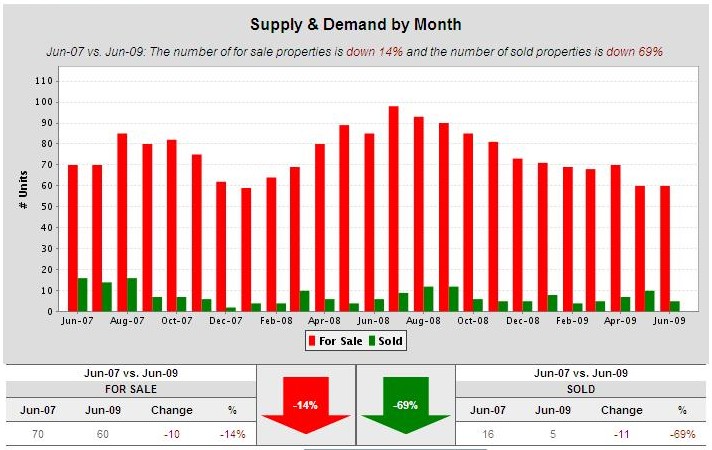 The condo market is taking a beating because buyers are opting for more affordable houses rather than condominiums and townhomes. 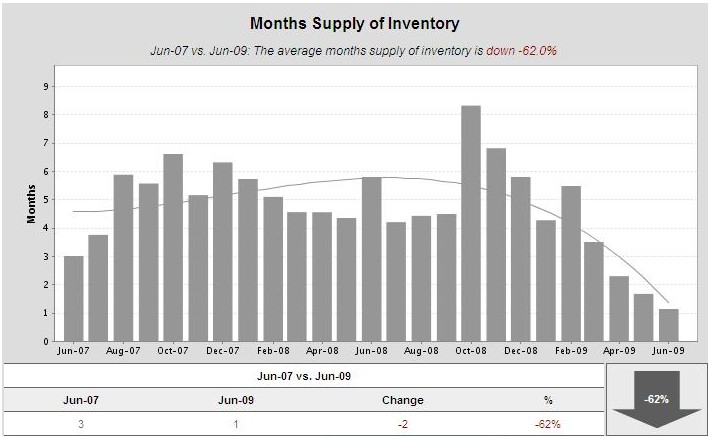 And months supply of inventory for condos in Cambrian, which is down 43% from 2 years ago: 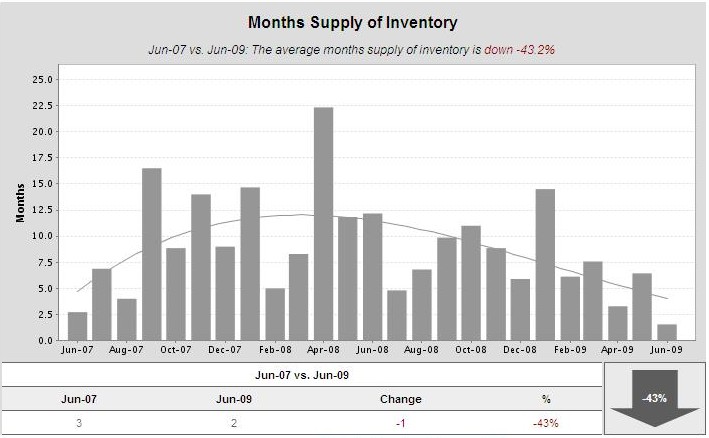 Now, a closer look at the most active part of the Cambrian market – the $400,000 to $650,000 price point among single family homes (and most of the activity is under $600k, and I am seeing multiple offers in that range especially).  The chart below displays the last 90 days worth of active listings, pending sales, and sold/closed homes that were for sale in Cambrian Park.  As you can see, many homes are selling quickly – but not all!  (Days on market were at their worst in March, which was when prices seem to have been at their lowest, and the DOM has been falling since then – not shown.) 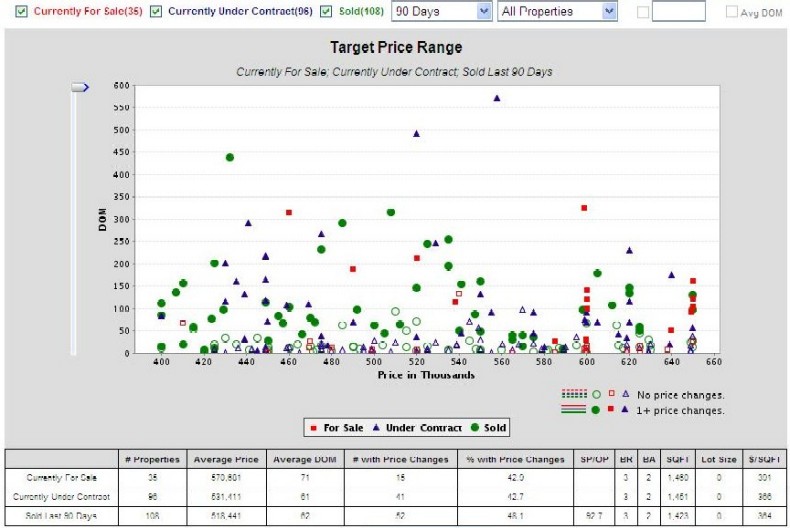 The biggest challenge in the market right now is that those who bought a home after 2000 often do not have enough equity to move up into a larger home (or from a condo or townhouse to a single family home).  The buyers market belongs to first time home buyers, investors, and people with either a great deal of equity from many years in their last home or those with a windfall (inheritance, companies going public, other out of the ordinary infusions of cash).

Homeowners who were counting on their home to provide part of the retirement fund are sorely disappointed in current market values and may feel, like the would-be move up buyers, trapped in their homes until the market recovers.  (Seniors: reverse mortgages are a better option, and are better regulated now, then they were a decade ago – so  this might be an option to consider.)

If you’re interested in buying, selling, or exchanging (1031 tax deferred exchange) your Cambrian Park home, please contact me.  I’d be happy to meet with you, review your wants and needs, and discuss your options and help formulate a plan of action to make your next move possible.