Campagna at Almaden is a younger community, built in 1997 and 1998, by New Cities. Nestled into the coastal foothills along the border of Los Gatos with San Jose’s Almaden and Cambrian areas, it’s both scenic and convenient. 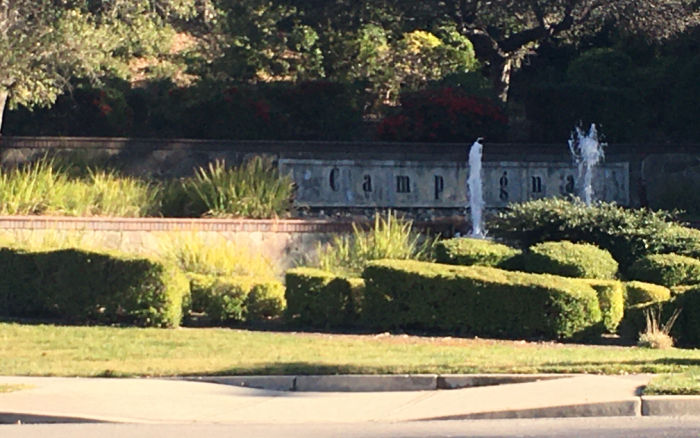 The main entrance to Campagna at Almaden features a pretty greenbelt area, fountain, and sign. 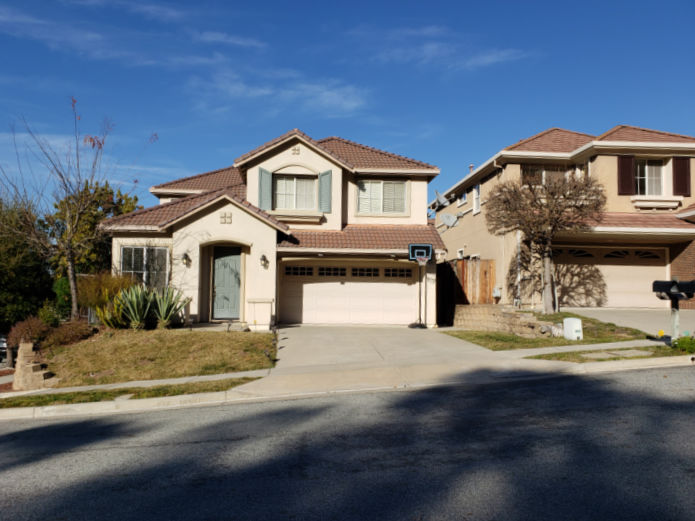 For San Jose and Silicon Valley generally, these 188 two story houses are relatively young! Most of the homes were built in 1997, but 21 houses were completed in 1998.  They have loads of windows, high ceilings, open floor plans, and attached garages. With the younger age also come larger bathrooms, bigger closets, and better sized kitchens than most of the older homes we typically find. They are built on slab foundations.

Generally, the parcels are small and the homes are fairly close together. Half of the lots are under 4000 SF (some as small as about  3125 SF) and the average lot size is 4599 SF.  For home buyers who don’t want a lot of yard to maintain, this is ideal!  Just seven of the lots are 8000 SF or larger with 2 of them over 10,000. Most of the largest lots have Union schools.  Very few homes have pools.

The streets are publicly maintained and offer sidewalks and street lamps. 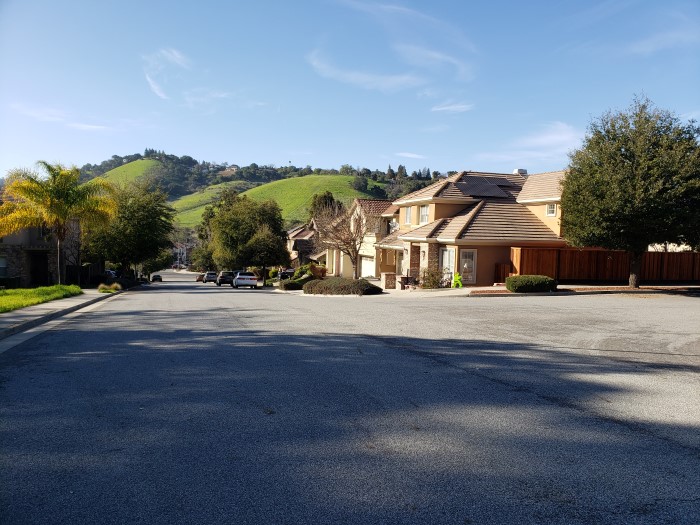 The neighborhood enjoys underground utilities. There are power lines between Via Campo Verde and Puerto Vallarta (in the Montevideo tract) and appear to service just the Montevideo homes.

There are greenbelt areas and trails, too, which are maintained by a minimal HOA fee of $40 – $50 per month per parcel. Via Fortuna Park is a wonderful place to stop by and enjoy some time.

Where is Campagna at Almaden?

This pretty neighborhood is situated close to Guadalupe Mines Road and Camden Avenue near the Guadalupe Creek. 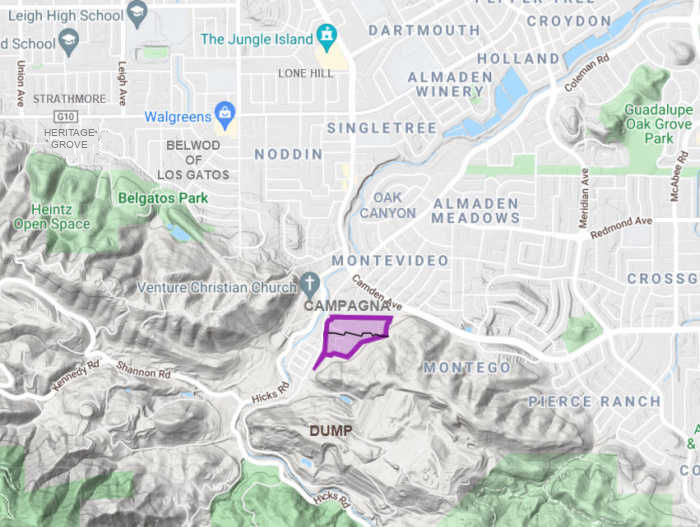 Here’s a view of Guadalupe Mines Road at Via Campagna: 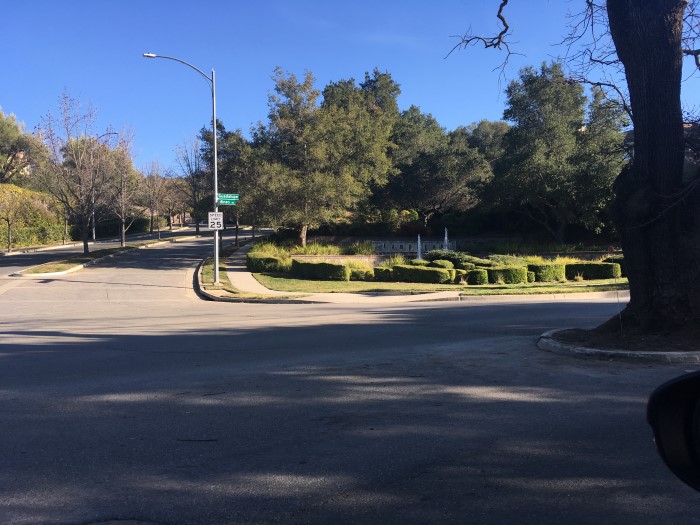 One of the unique things about this pocket is that it straddles the school district boundaries. All of the local schools are good to excellent, but it’s unusual to have a neighborhood find itself in two different school jurisdictions.

The boundary line for the districts vary somewhat from one map to the next, including the one on MLSListings, which is off significantly (and quite a few sold homes claiming to be in the Los Gatos Union School District are not). The final arbiter is the county tax assessor’s office, so when in doubt, check there!  The best actual map that I found was for the Campbell Union High School District, which I have done my best to imitate here. 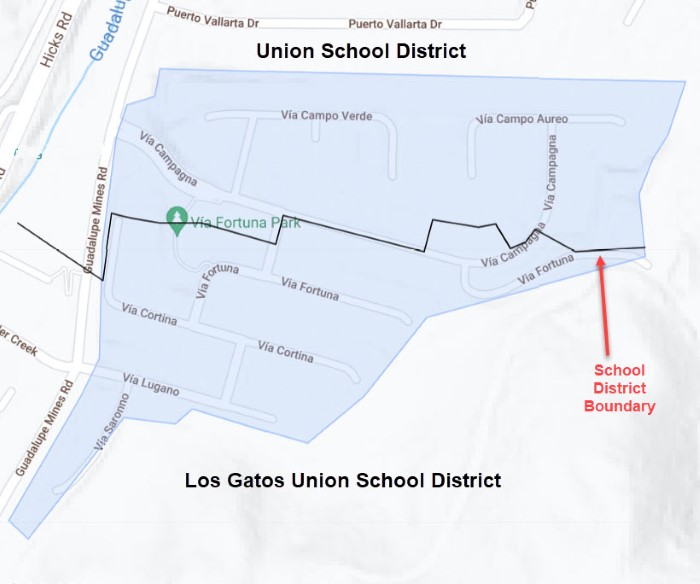 Via Campagna has particularly wonky boundaries, as you can see above.

Are there any special concerns with the Campagna neighborhood?

This is a fabulous neighborhood with lots of plusses, such as convenience (it’s just a couple of miles to Highway 85), scenic beauty, and well manicured homes. Like everywhere, though, there are also special concerns to be aware of.

Some homes may feel a lack of privacy, particularly where the lots are small, since every house is 2 stories and they can be quite close together. (If you put a premium on privacy, you may want to target buying a single story house in a single story neighborhood.)

Because Campagna at Almaden is in the foothills, there will be wildlife that comes to visit. Recently we were showing a home in Campagna and saw a couple of deer in the greenbelt across the street. Guadalupe Creek is in close proximity and it may bring mountain lions, feral pigs, and other animals, hawks, and critters into the neighborhood.

Also nearby is the Guadalupe Landfill (aka The Dump), which was once a mercury or quicksilver mine. Trucks  will rumble down Guadalupe Mines Road to get there and you may hear them when you’d rather not. There may be occasional odors from the landfill site, too. (I read some years ago that it was near capacity and would be closing, but have no updates on that.)

As is often the case with hills, there are some geologic issues, too. The Shannon Fault appears to go through part of the neighborhood (by zooming in many times, you can find it on this USGS map), and some areas may be in an unstable soils or landslide zone. If you want to build a pool or add on in those areas, you may be required to do some sort of geologic review first.

Campagna at Almaden real estate, homes for sale and sold

What do the houses at Campagna cost? Naturally it will vary on home size, lot size, privacy, school district, views, condition – and more! Here is what is for sale now or sold in the last 12 months there. Just a few are shown here, please click to view more.

Want to sell or buy a home at Campagna or anywhere nearby? Please reach out to us – we’d love to connect.