Campbell, California: Once the Heart of the Fruit Canning Industry 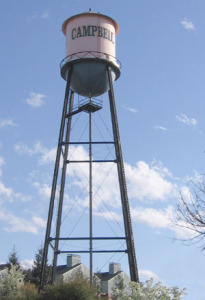 The city of Campbell, California,  was founded by Benjamin Campbell and local history of the region as “Campbell” goes back over 150 years. His first land purchase there occurred in 1851, and he planted it with grain and hay. This was a busy place during the orchard and fruit canning eras of the valley; it boasted three canneries in what is now the city of Campbell. Situated perfectly along the railroad line to Los Gatos, the Campbell area became a shipping center for the prized produce of The Valley of Hearts Delight.

Interestingly, while the city’s origins go back to the orchard era, Campbell was not incorporated until 1952. As with many other incorporations in Santa Clara County at that time, it was largely as a defensive maneuver against being swallowed up by the fast growing city of San Jose.

Today Campbell has a small town feel while offering a quaint downtown area, good schools, and more affordably  priced homes (for our valley, anyway). Crime is low and there’s great community spirit. Downtown Campbell is a destination for many with some excellent restaurants, shops, art galleries and museums. Campbell is also home to several excellent parks and movie theaters and recently became tied in to the light rail system too, making it not just a great place to live, but also a great location for businesses who want to be more “green” and give its employees a better shot at using public transit.

See more articles on Campbell within this blog – the Campbell real estate market, events, photos and much more.

For more information about Campbell, visit the city’s official website at http://www.ci.campbell.ca.us.