Client control: what it is, and why it benefits everyone involved 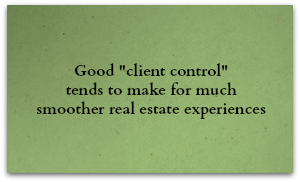 “Client control” is a strange sounding phrase. It almost seems manipulative! But that is very far from the truth.  It’s something helpful which benefits buyers, sellers and real estate agents. What is it, then?

Essentially, client control refers to home buyers and sellers behaving themselves.  Most of the time, Silicon Valley real estate consumers have a fairly good idea of what is appropriate behavior (what is expected of them and of the other party) when buying, selling, or getting through the ‘sale pending’ period.  When they don’t, their Realtor or salesperson should be providing some guidance (communicating, teaching, coaching) on what to do or not to do, and what are appropriate expectations.  When expectations are incorrect, unhappiness ensues.  It is all about expectations!

Anyone familiar with children can see the parallel with raising kids. Children who do not understand boundaries end up being miserable, and they take everyone else around them into their misery.  It’s the same with “out of control” clients.  Most Realtors try to ascertain upfront whether or not it will be possible to have a good working relationship with potential buyers or sellers between them and also in escrow.  Are they honest? Polite? Considerate? Reasonable? Teachable or coach-able? And perhaps other criteria as well. If not, it won’t be worth it to try to represent them in a transaction. It would be a giant headache.

This is true in other professions too.  I’ve known doctors and lawyers (including my dad, when he was practicing law in San Jose) to fire their patients and clients at times.  Recently I saw an article written by an attorney on this same topic. Brian Tannebaum wrote a post entitled  The Practice: Client Control, Before It’s Out Of Control  and wisely stated “I believe in the philosophy that sometimes the best client is the one you turn down”.  This is exactly the same in realty.

Assuming that agents and buyers have elected to work together, the real estate licensee or Realtor should be giving a framework of what to expect, how to behave, etc.  Sometimes that doesn’t happen.  Sometimes the clients don’t listen or are set in what they think is appropriate – even if that’s incorrect. That’s when things get unpleasant.   Here are some examples.

How does this happen that people can be so rude at times?  Sometimes, though I’d say not too often, we just have jerks in our universe.  Once in awhile there’s a new agent who just doesn’t know any better, and allows things to happen which shouldn’t.  Or newer or weak real estate agents who are afraid to provide important guidelines to their clients. Perhaps there’s a misfire in communications between the agents involved.  I’ve seen some newbies go to do a final walk through which they set up with their client – but forgot to tell the listing agent.  But also I’ve seen some consumers walk all over their salesperson, do whatever they want, get mad when things don’t go their way, and then everyone – absolutely everyone – ends up unhappy.

If home sellers and buyers will allow real estate professionals to guide them on what is normal or expected, assuming that the agent isn’t afraid of being clear, it will be better for everyone because unrealistic expectations result in upset (hurt, anger).  Met expectations result in happiness and hopefully even gratitude.

Sometimes the issue isn’t the consumers so much  as it is bad Realtors or real estate sales people. Poor real estate agents on the other side of the transaction is a completely different topic, though – to be tackled another time!