Congress Springs Road, Saratoga’s Historic Toll Road and What it is Now

Did you know that locals in Saratoga  once had a two-day long party to celebrate a road? Those party animals! 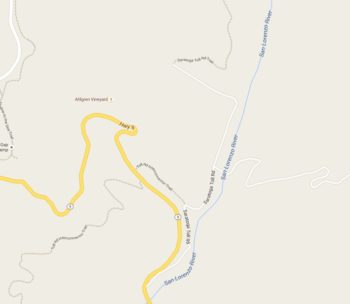 Congress Springs Road is the name given to a stretch of Highway 9 as it passes through Saratoga, where it is also called Big Basin Way. East of 35, the road follows Saratoga Creek between the Saratoga Gap Open Space Preserve and Sanborn County Park to the edge of downtown Saratoga, or Saratoga Village, near the intersection with Ambric Knolls Road (as indicated on Google Maps).

The origins of Congress Springs Road (and this portion of 9) came from a committee of private investors in 1863 who wanted to build a road into the Santa Cruz mountains to access the expansive lumber resources around the San Lorenzo River and Pescadero Creek. Constructed between 1865 to June, 1871, the five-year project was a significant engineering feat, built by Chinese laborers through dense forest and undergrowth on steep valley slopes. The final track stretched from downtown to Saratoga Summit and was a road named the Saratoga and Pescadero Turnpike and Wagon Road.

The project was highly anticipated and its conclusion was met with a two-day, overnight celebration. Over two-hundred attended the festivities, where colorful wagons paraded up to the Summit before stopping at a picnic and camp site to spend the night with music, speeches, and a lavish trout dinner before the trek home next morning.

Within a year, the road was collecting tolls ranging from 25 cent to 1 dollar (based on vehicle and capacity), and had an established stage route. 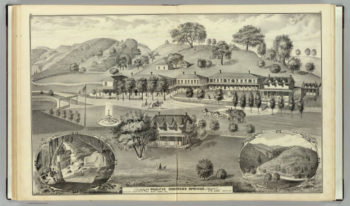 Don’t know this landmark? Saratoga is home to natural mineral springs, about a mile out of town, which have a similar composition to the renown Congress Springs in Saratoga, NY. A resort was built on 720 acres around the springs and opened the summer of 1866. By the 1870s, the resort was the place to be – popular with the famous, wealthy, fashionable, and elite, the resort also bottled and shipped Congress water internationally as a healthy beverage and cure for numerous maladies. The hotel featured private rooms and cottages with lush lawns, hiking, fishing (the Saratoga Creek was abundant with fish), hunting, and picnicking on the grounds, and by 1872, hot and cold mineral baths, connections with the Southern Pacific Railroad, and its own dairy, orchard, and vineyard.

On June 15, 1903, a fire broke out in the kitchen during dinner. Despite attempts to control the fire, the hotel was decimated by the blaze. The hotel was never rebuilt and the resort slowly stagnated until it was diminished to a picnic ground and the property was purchased by the San Jose Water Works and closed to the public in 1942.

So what is left of this many-named mountain road? Portions of it have been widened, re-engineered and paved to be a part of highway 9. Sections of the road were not used to build the highway and have since been repurposed as Saratoga Toll Road and Saratoga Toll Road Trail in Castle Rock State Park. (citation: http://www.trailstompers.com/castle-rock-state-park-trail-runs.html) 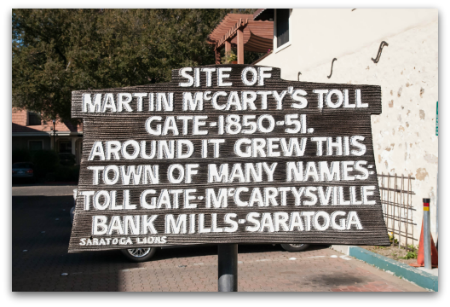 Something to clarify is that a “closer in” stretch of this road already had a toll booth on it, and a sign in Saratoga Village marks that one as having begun in 1850 – 1851. The City of Saratoga has a little historical background on that earlier toll road (see http://www.saratoga.ca.us/about/history.asp), explaining that Saratoga began as a saw mill (Los Gatos has a parallel in Forbes Mill), and that

“In 1848, William Campbell set up shop on the banks of what is now Saratoga Creek. His sawmill was destined to be the seed of a new community, but before he could complete it, gold was discovered at the western base of the Sierras, touching off the California Gold Rush and delaying Campbell’s plans.Martin McCarty leased Campbell’s mill in 1850, and began improving access to the site by building a toll road.”

Want to learn more about Saratoga’s history?  Information for this post was collected from a variety of interesting sources, including these:

And online book, Pen Pictures from the “Garden of the World”

For an interesting article on the Springs: http://www.fohbc.org/PDF_Files/Saratogas_BGrapentine.pdf