Crawlspace access: What is it? Where is it? Why does it matter? 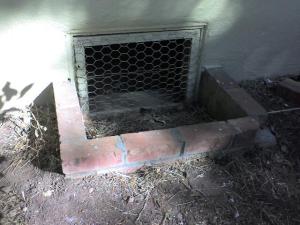 First time home buyers may have heard the word “crawl space” but not had a good idea of what it refers to – especially if they have only lived in houses built on a slab foundation. So let’s touch on it today.

When homes are built on a raised foundation, rather than slab foundation, there’s space between the dirt under the house and the house itself – often 3′ (but not always), sometimes more.  Unless the structure is built on a hillside, there won’t be enough height to walk around in that space, hence the need to crawl in the crawl space.

Most of the time, access to this space is indoors and specifically on the floor of a closet, where there appears to be a flat opening of about 3′ by 3′, sometimes smaller.  This can make entry tight.  At other times. the access is via the outside (more likely the case in properties built before 1950 in Silicon Valley than in newer properties.)  Here it’s a lot easier for homeowners, inspectors and repair people to enter – but also easier for animals and pests.  Care must be taken, as with the vent screens, to keep unwanted visitors out! 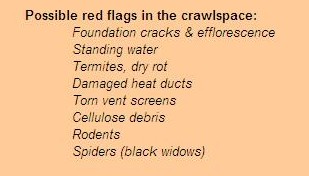 If your home has a crawl space, you will want to monitor it. Plan either to enter it to check on things periodically or pay an inspector to do so as this is an area which can reveal problems like the presence of termites, water damage to the bathroom floors, damaged heat ducts, and more.  It is also important to periodically check to make sure that there are no intruders (rodents), standing water, or other issues such as cracked foundations.

Which is better – having a crawl space, or having a slab?

Not sure if your San Jose area house is on a slab or raised foundation?  Here are a couple of hints:

Wikipedia article explaining what a crawl space is