When buying or selling a home in California, consumers can learn if the property is in a zone marked for potential flooding due to dam failure. The disclosure companies will not say which dam is causing the risk, or if it’s several since often there will be more than one dam along the same creek or river, as is the case along the Los Gatos Creek.

Quick take: you can learn about the areas which may be impacted by flooding due to dam failure at this link: Dam Breach Inundation Map Web Publisher.

Also relevant to the requirement for flood insurance: the 100 and 500 year flood plain inundation risks are considered to be “natural hazards” and the flooding from dam breaches are not, since humans have created the dams (or levees).  Per FEMA: “a flood resulting from changes in river flows is a natural hazard, whereas flooding due to a dam failure is considered a manmade hazard, and therefore excluded from the National Risk Index.”

Approximately 25% of floods in the U.S. are outside of the flood plains. It may be advisable for those in other areas to consider buying flood insurance even if it is not required by the lender.

Recently Clair sleuthed out the State of California’s Dam Breach Inundation Map Web Publisher. This interesting and helpful tool is an interactive map covering both most counties and most dams. I encourage our readers to check it out. 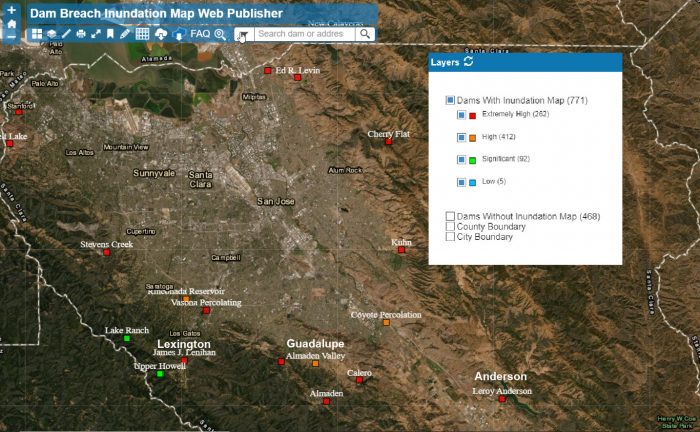 This Dam Breach website indicates which dams have their flood risk from failure marked in one of four colors to indicate the higher or lower risk levels. In Santa Clara County there are more than a dozen dams marked at the highest risk category, and some of them hold a large capacity of water. (Some of the dams appear to not be at lake-like reservoirs, but more like covered percolation ponds or holding tanks.)

The concern today, of course, is what happens if we experience a large earthquake and any of these dams fail.

Lake Anderson in South County is the largest reservoir in Santa Clara County. It is undergoing a 10 year seismic retrofit and until it’s completed is at only 3% capacity for safety reasons.  You can view a short video about the retrofit here. With that in mind, take a look at the image below, which showcases what areas could be inundated should the dam there fail. 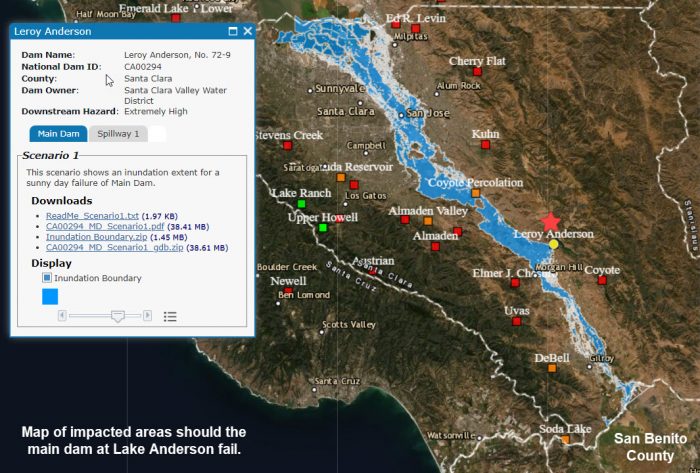 The map doesn’t show if the flooding goes beyond the county line to the south, and unfortunately not every county appears to be participating in this website and not every reservoir is covered. I was curious about the enormous San Luis Reservoir just beyond our county’s border, but there was no map for that one.

The smaller Guadalupe Reservoir and Dam is also getting a seismic retrofit to prevent dam failure. It’s supposed to be completed in 2024.

Another large reservoir serving Santa Clara County is Lexington. The James J. Lenihan Dam us upstream from the Vasona Dam and downstream from the Austrian dam. 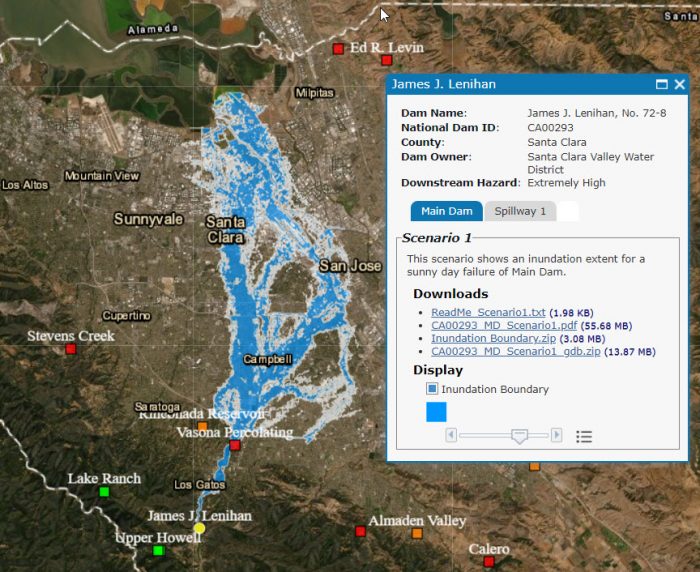 While not all of California nor all reservoirs / dams are covered, it is interesting to note how many parts of the San Francisco Bay Area appear to be in this risk zone for flooding from dam failure. Next is the risk to Foster City should the Lower Crystal Springs Dam fail. Foster City has a low elevation and is already at some risk of future flooding from rising bay waters. 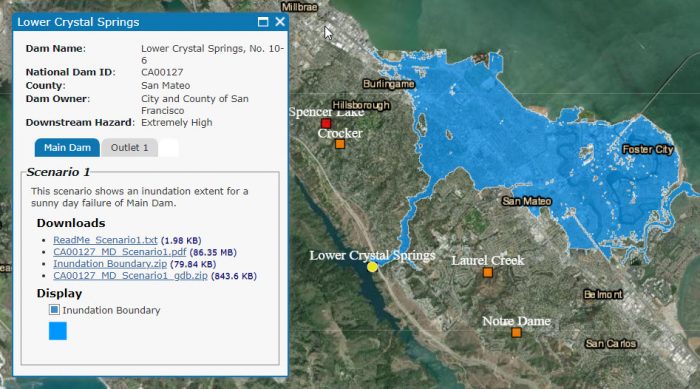 The Stevens Creek Reservoir in the hills over Cupertino: 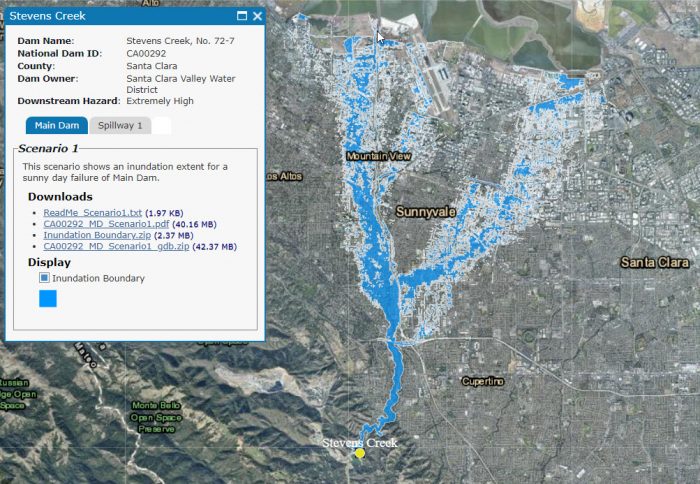 What I have not seen is a map showing ALL of these areas of potential flooding. I suspect that many consumers would love to be in areas with no such risk zones – if they exist.

Who owns the dams?

Most of the dams are owned by the Santa Clara Valley Water District, also known as Valley Water.

There are 10 reservoirs and dams owned and maintained by the Santa Clara Valley Water District. Their webpage for this list includes information on the size and capacity of each one, a little history, the year built, and something about the name of each one. These were built in the 1930s and 1950s.

Most of the other reservoirs and dams are owned by San Jose Water Company, including the Austrian Dam at Lake Elsman and the Lake Ranch Dam in the Santa Cruz Mountains, which is also getting retrofit work done. That’s good news as it is quite old and is sitting right on top of the San Andreas Earthquake Fault. If you look at the interactive map and mouse over various dams,  you’ll see which entity owns which dam.

Dams that have failed

Happily, we don’t often hear about breaches in dams and ensuing disasters. But it has happened 45 times in California, and you can read the table of those events here.

After the dam at the Oroville Reservoir experienced serious erosion on the spillway in 2017, the state took a hard look at the dams around the state and has since required safety upgrades to many of them.

One of the worst disasters in California history struct Southern California when the St. Francis Dam breached and was destroyed in 1928. This was not due to an earthquake, but poor engineering. Over 400 people died when the waters broke through at about midnight. There are several videos and a documentary that are easy to find via a web search.

I mention the failures to underscore my own appreciation that the dams are being checked and improved as needed. I wish they could be finished faster, of course. Having several reservoirs using such a small percentage of their capacity adds to the need for further water cutbacks, and it is frustrating to consumers who are already conserving to have to do much more. Studying the maps of the potential flood zones, though, we will all want the work to be done properly.

Educational handout on dams and levees “Dams can be damaged by natural disasters. In 1926, an earthquake struck the St. Francis Dam near Los Angeles. The dam collapsed, causing a flood that killed 600 people. It was one of the worst disasters in California’s history.” (page 33)

Location Research (on this site)

FEMA flood zone map – DOES NOT INCLUDE FLOODING FROM DAM FAILURE. It does show the levees, though!