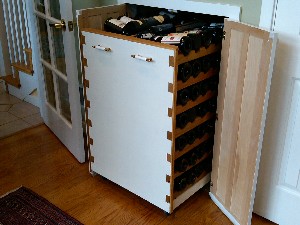 Seen on Realtors board tour: Pull out wine rack for under the staircase

Many of our houses in Santa Clara County are ranch style, tract homes which were built from the 1950s to the 1970s (or ’80s). Often they include one coat closet, normally near the entry area of the home, and one linen closet, usually found close to the hall bathroom.  To the surprise of folks relocating to Silicon Valley from colder climates, we don’t have basements in the majority of houses here.

Where does all of our “stuff” go? That’s what these home buyers are wondering. It is really a critical question in smaller homes with fewer, and tinier, closets.

It is not uncommon to see garages in the San Jose area acting as a catch-all for seasonal decorations, old financial documents that can’t yet be shredded, business files, boxes from the last move which haven’t been opened yet, keepsakes and things that the residents haven’t had time to handle yet…for years at a time.  Guilty here also!  We will not be featured on an episode of “Hoarders”, but our garage also needs thinning out.  In this case, I have real estate files going back until 1993.  Rather, I did.  I have been scanning them, saving to both an external hard drive and to CDs, and shredding them.  So far about 10 boxes are gone.  Only a few more to go (I wish!).

Clutter increases stress for most of us.  Home buyers love built ins and see a future with less clutter when viewing cabinetry in home offices, family rooms, hallways, etc.  It’s a great surprise that assures them of better organization and less clutter in that home.

Most houses, townhouses and condos have places where a little more storage can be squeaked out, or even where wasted space was planned in!  This is especially true for structures with attics (sorry, Eichler and mid-century modern home owners). Here are some possibilities to consider in your own home:

Adding storage is great, but the other half of the equation is getting rid of items that aren’t truly needed.  If you are preparing to sell your Silicon Valley home, one of the best things you can do to boost your sales price is to declutter.  After that, you’ve probably heard me say (or seen me write) that a storage pod is a good idea.  I strongly suggest going through the decluttering before the storage, though, or you may actually increase the problem at the new place. It can be hard to find the time to go through boxes of stuff later, especially when you know that really, half of it should have been thrown out prior to the move.

For many home owners in Los Gatos, Saratoga and San Jose, this really is one of the toughest challenges in a move: getting rid of accumulated things, some treasures but many not.  The lighter the load, though, the less it will seem to you and to your home’s prospective buyers, that storage is not really an issue.  For many, senior home sellers especially, it can be a good idea to start thinning out possessions years ahead of time.  A bag a week each to family, friends or a charity and another to the trash or recycling.  After a few months you’ll see a huge difference!