Mid-century modern homes, including those designed by Joseph Eichler, dot the Silicon Valley & South Bay Area real estate landscape.  There are probably more than 5,000 Eichlers in Santa Clara County altogether, plus all the other homes of that genre with the similar modern style, which was influenced by the ranch and prarie styles as well as the dramatic work by Frank Lloyd Wright (open beam ceilings, nearly flat roofs, lots of exposed wood & glass windows stretching from the floor to the ceiling).  Eichlers, especially, put a premium on privacy from the street but open to the outdoors otherwise.

Not every community in Santa Clara County has Eichler homes, but most have the mid-century modern style homes & neighborhoods. These homes vary from tiny, modest cottages of 1100 square feet to large & elegant  houses of nearly 3,000 square feet, featuring big, central atriums or courtyards.  (There are also some co-ops in the valley too.)  The quality varies, as the homes were constructed by several different builders with different home buying budgets in mind.  Real estate prices range from “entry level” to very expensive, depending on the location (city and schools), size of the home & lot, and condition of the property. Most of them are now about 50 years old, though some are a little younger.

In Los Gatos there are no Eichlers but there are a small handful of single family homes which are mid-century modern on Eastridge Drive (just off Blossom Hill Road and Hillbrook). There are a couple more at the end of Magnuson Terrace (off Magnuson Loop and Los Gatos Blvd).  Additionally, there are some smaller mid-50s homes on El Gato (and adjacent portions of Escobar) off of Los Gatos-Almaden Road. Unfortunately, not all of these homes are “well kept”, though many are. 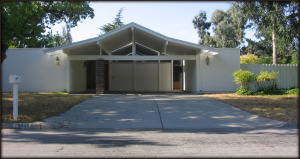 Monte Sereno is home to 16 Eichler houses on Via Sereno beginning at the intersection of Winchester Blvd with Via Sereno.  These houses were built in the late 60s to early 70s.

Visit Saratoga and you’ll see 35 larger Eichler homes (on larger lots) just off Cox Avenue (“in the schools“) along De Havilland Drive. I showed one a few months ago and noticed that this street, despite enjoying the famed Saratoga Schools, is not so well kept – it could be that some neighbors were simply conserving water due to the then 10% water cutback demanded by San Jose Water due to the drought.  One home owner added on or remodeled but it was such that the architectural style of the original building was lost – a shame!  Many of these homes enjoy a creekside location.  The only real negative is that there’s freeway noise from nearby highway 85.  There are a few more Eichlers near the busy intersection of Quito & Allendale (facing Quito) along the Campbell border. 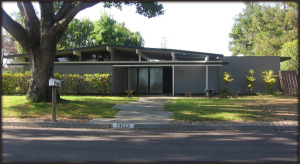 The Willow Glen area of San Jose has an abundant supply of large & gracious Eichlers on wide roads: there appear to be hundreds of them spread out over several developments.  For the most part, these are beautiful neighborhoods with tree-lined, wide streets and a great sense of space. Most of these homes are more affordable than you’d expect and the reason is the public school scores in the area.  Had the homes been built out of the San Jose Unified School District area in into the Campbell schools area, they’d certainly sell for much, much more.  In that area is the very popular St. Christopher’s School (Catholic), which many kids in Willow Glen attend.

More affordable Eichlers can be found in central San Jose near Fruitvale and Bascom and again in parts of Sunnyvale.  In the least expensive areas, though, beware of deferred maintenance.  Last year I showed a home near Fruitvale in San Jose which was simply riddled with foundation cracks.  These are hard to repair with a slab foundation – it can mean jackhammering up the whole foundation!

There are some mid-century moderns in the Cambrian Park area of San Jose both in the Rosswood/Bel Estos area (scattered in with some more traditional ranch style homes) and also just off Hillsdale and Foxworthy in the Hacienda Gardens neighborhood.

Continuing north, the supply of Eichlers in particular increases dramatically as you get to Los Altos and then even more in Sunnyvale, Mountain View and Palo Alto, where Eichler enclaves number in the thousands.  (Word of caution: some of these Mountain View homes are in the 100 year flood plain and it will require flood insurance if you purchase a home there  and utilize a loan.) Want to live on the Peninsula? You can find many mid-century modern homes there too.

As with any 50 year old home, there are things to watch for in purchasing these properties! While many of the mid-century moderns are built on raised foundations, some aren’t – and Eichler’s aren’t. That wouldn’t be such a big deal except for the fact that the plumbing is embedded in the slab, and so is the radiant heating coils. If they go out, it can be a pain to replace them. (Eichler often built with copper pipes, luckily.) The radiant heating systems do sometimes fail and if/when that happens, homeowners can either add baseboard (which is fairly inexpensive and easy to do) or rip up the concrete and fix the coils.

A more common and persistent problem is with the open beam ceilings and the tar and gravel roofs over them: there’s no insulation.  Luckily, in recent years foam roofs have become a popular solution.  They not only protect the roof from the rain and other elements, but they insulate beautifully.  The downside is that if an area becomes damaged, you can’t “patch” it like you can with other roof types – instead, you really need to replace the whole roof. Yes, that’s expensive.  But clients of mine who’ve gotten the foam roof love it as their homes are more comfortable both in summer and in winter.

Many non-Eichler properties had plumbing with galvanized steel pipes. Watch for that – those tend to last about 40 years, so if the home hasn’t been re-piped it may be an expense waiting to happen.

A small concern with radiant heat is the type of floorcoverings that can be used over it. Often these homes are built with vinyl, linoleum or other hard surface flooring.  Carpeting can be difficult because the heated floors can be a problem.  So area rugs are usually preferred.

For further reading, please check out the Wikipedia article on Joseph Eichler and another on the Mid-Century Modern style.

What does it cost to buy an Eichler home in the San Jose, Los Gatos or Saratoga Area?

As of right now, May 2022, prices range from a low of about $900,000 for one of the stock cooperatives (like a condo) in Santa Clara to nearly 2 million for a house in a modest neighborhood and more than four million dollars to purchase an Eichler style house. (An Eichler in Monte Sereno recently sold right at $4 million.) These homes in Palo Alto, Monte Sereno, or Saratoga will cost significantly more than a similar home in Santa Clara or Willow Glen.  Browsing is perhaps the best way to get a feel for the pricing.