From the Valley of Hearts Delight to a Paved Paradise: Where Does the Water Go?

by Mary Pope-Handy | Dec 7, 2011 | About the Valley of Hearts Delight, Cupertino, Green Living, Yard and Garden 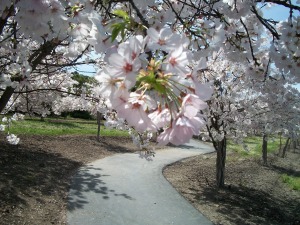 In the middle of the last century, the Santa Clara Valley was bursting with vineyards, fruit and nut orchards, and groves of citrus trees. The mild climate and all of these beautiful blossoms mile after mile warranted the nickname, “The Valley of Hearts Delight“. Most of it was, of course, unpaved.  Following the end of World War II, the agricultural land began giving way to housing and industry, later more housing and high tech in particular, and Silicon Valley was born. And, to quote a song, “they paved paradise”.

Water can be somewhat scarce here at times – the sub tropical climate means mild temps and just enough rain, about 20″ per year for most of the San Jose area, but more as you get closer to the Monterey Bay and Pacific Ocean.  When we do get rain, where does it go? In the days of big agriculture, most of it found its way back into the drinking water: it was absorbed by the soil, and then it filtered down into the underground streams.  Wells tapped into this water source and the water was used for drinking, cooking, bathing, watering the crops and more.  Now, though, much of the valley is paved.  Water runs to gutters, and they lead directly to the bay, skipping the aquifers and also skipping the filtering process that the soil provides.  As you might imagine, this can screw things up a bit. 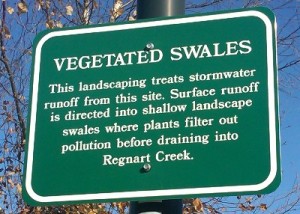 One solution is to create more places for the runoff water to get back into the soil and meander back to the aquifer.  The City of Cupertino has vegetated swales for just that purpose behind the library and city buildings, and a large sign explains why the landscaping looks the way it does (a dirt strip with a sunken section in the middle, but landscaped).  This is not uncommon in many parts of the US – I have seen it all over the east coast and the southern states – but a little less common here.  A great idea, I hope it catches and becomes more typical. Kudos to Cupertino for working to improve the local ecosystem and water quality! We need to do more for water reclamation. If it gets all the way to the bay, it cannot be drunk any more, but from the aquifer it can. So many reasons why we should be diverting water away from pavement and gutters and onto soil!

After taking note of this a week or two ago, I did some searching online and found a 2006 article by the Cupertino Courier (now owned by the San Jose Mercury News) about this same effort. It’s a well written piece and if you want to learn more, read on over at the archive:
http://mytown.mercurynews.com/archives/cupertinocourier/20060201/cu-news1.shtml