by Mary Pope-Handy | Feb 26, 2011 | About the Valley of Hearts Delight, Businesses in Silicon Valley

Cosentino’s Market in San Jose will be closing its doors tonight.  My husband, our daughter and I headed over there late this afternoon for one last schlep down the aisles, to buy a few things and most of all, to reminisce. It has been an icon in the South Bay area.  I’m truly sorry that it’s closing. 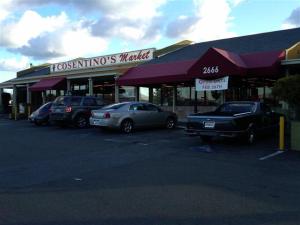 The Cosentino family (four brothers and also their extended clan, I suspect) has run this store (and at times, others too) for 64 years (when this part of California was still known as “The Valley of Heart’s Delight”).

Locally owned and operated, it was truly a part of the community and was one of only a few Bay Area grocery stores or small chains that is not owned by a far away corporation. The market was well known for tremendously diverse produce (sometimes very obscure items that Santa Clara County residents might not have seen anywhere else) and friendly service.

We made our way through the store.  Not surprisingly, many of the aisles were somewhat empty.  The produce area was 99% sold out – that was, after all, their biggest claim to fame in Silicon Valley, and we got there at around 5pm.

For the last four years, you could tune into KLIV radio (1590 on am dial or www.KLIV.com) and hear “Mr. Produce“, Phil Cosentino, discuss everything fruit & vegetable related in The Produce Report.

Just a few months ago, after hearing one of his radio commentaries, I  emailed the market’s general email address with a question about green grapefruit, which Jim and I enjoyed very, very much on our honeymoon in Bora Bora (Tahiti) in 1985 – and haven’t been able to find here since. (and didn’t ever see in Hawaii on trips there, either).  To my surprise, Phil Cosentino phoned me back in response to my email and explained that there are too many issues with invasive insects, so it’s pretty much impossible to import fruit from there. I was really amazed and delighted that he took the time to phone me back, and truly appreciated his doing that.

Tonight we spoke casually with a few employees and the three of us chatted briefly with Phil Cosentino as he was doing some inventory for the sale to Lunardi’s, which should be finalized soon.  We wanted to express our sadness at the store’s closing, chat about his show on KLIV etc. He’s as approachable,  friendly and down-to-earth in person as he seems on the radio (or phone).  I told him that we’d spoken by phone awhile back and we chatted again about the green grapefruit. Jim and I told him we hoped he’d continue to do his commentary on KLIV, but he said he doesn’t want to do it if he’s not current.  (I am very sure that even in retirement, he will have a pulse on the market. So I really do hope he continues to check in with his listeners via KLIV.)

Phil continues to maintain his orchard in San Jose…one of the last around.  He told us we should drive out and see it sometime. I am very sure that we will!

Cosentino’s Market 2666 S. Bascom Avenue, San Jose, CA 95124 will be closing tonight but reopening as a Lunardi’s Market (another fine locally owned and run chain of stores from another wonderful Italian American family).

Please see the Cosentino’s website for their note on the closing and thanks to their customers: http://www.cosentinosmarkets.com Happily, the Cosentino’s employees are all assured of a job under the new ownership.

Many thanks to the Cosentino family for their wonderful gift to all of us since the 1940s! Wishing the owners much happiness in retirement!