Last weekend, my husband and I had guests, Tisza and Mel, visiting to help me celebrate my 50th birthday.  They hail from Claremont in southern California and enjoying seeing new and unique places, so Saturday afternoon I suggested that they visit the historic Hacienda Cemetery and Memorial Park in New Almaden, off Almaden Road near Casa Grande.

Photos of the Hacienda Cemetery and Memorial Park

What follows are photos of their trip to the scenic old graveyard, which they kindly permit me to post here. 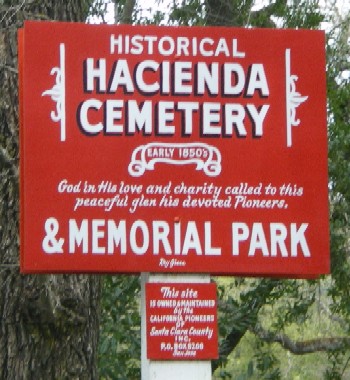 This area of Santa Clara County was filled with mercury (quicksilver) mines, and that product was vitally important in extracting gold from rock during the gold rush years.  The New Almaden Mine (named after a large mine in Spain called Almaden) was at one point the largest producing mercury mine in the world. 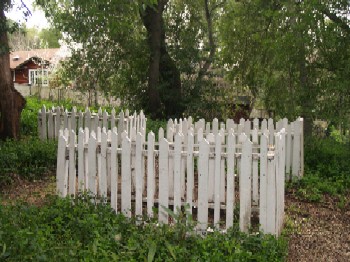 The final resting place for the miners and early San Jose pioneers is an oak-studded glen, close to a creek and in the shadow of foothills.  The graves are each surrounded by picket fences of various styles and shapes. 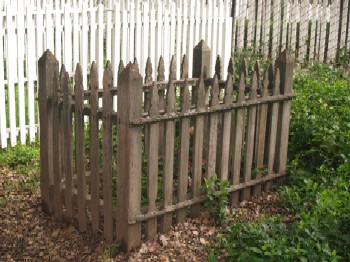 Here’s a grave with an unpainted fence (most are white).  There are a few markers made of wood – some maintained and others crumbling with age. 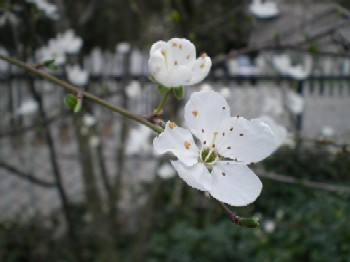 Flowering trees add to the beauty of the spot.

One of the most peculiar aspects of this memorial park, and the reason I suggested that Tisza and Mel visit it, is the grave for the arm of Bertram Barrett. 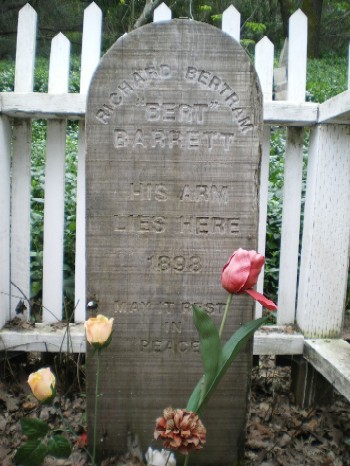 You just don’t see this type of thing everyday.

The Folklore Regarding the Arm of Bert:

Growing up in Santa Clara, I’d always heard the tale of “Bert’s Arm”. It was the stuff of campfire stories, grist for frightening younger kids.   As the story went, Bert’s arm was severed in an accident in 1898 and was buried at the graveyard in the country….. The rest of him went to God in 1959, but by then there was no room left at the little graveyard where his arm was buried. So his body was placed at Oak Hill Cemetery several miles away. (So far, this is all true.)  The fable went on to say that every night, the arm of Bert rises from the ground, searching desperately for the rest of the body…..  At this point, storytellers may move their arms around wildly, gripping ahold of an entranced and scared child to achieve the full impact  (most effective around a campfire, ideally in Almaden Valley somewhere).

I’d heard the story but was surprised to see this marker for Bert’s arm when a field trip for girl scouts from St. Mary’s Elementary School in Los Gatos brought us to this very spot a decade or so ago.

Want to see it? This is not a hard place to find but it’s not exactly on the beaten path.  From downtown San Jose, get onto Almaden Expressway and follow it south until you reach Almaden Road.  Continue on beyond the city’s borders and into the countryside, where you’ll view horses grazing.  After a couple of miles you will be in the historic “New Almaden” area. Normally Casa Grande is open and you can see the museum for the mine, but in 2009 it is closed for renovation.  Bertram Road loops from one part of Almaden Road to another in this neighborhood.  Oddly, the road cuts straight through the graveyard and undoubtedly covers unmarked graves. (I cannot imagine that it isn’t haunted!)

Mel and Tisza enjoyed visiting the Hacienda Cemetery and Memorial Park, and found the story amusing too.  Many thanks to them for sharing their photos of the day with me and with my blog readers!  (And thanks to Tisza too for making the most incredible birthday cake I’ve ever enjoyed!) 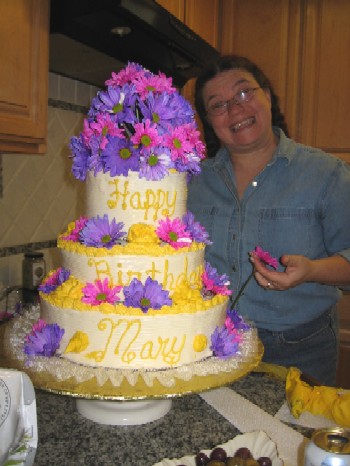 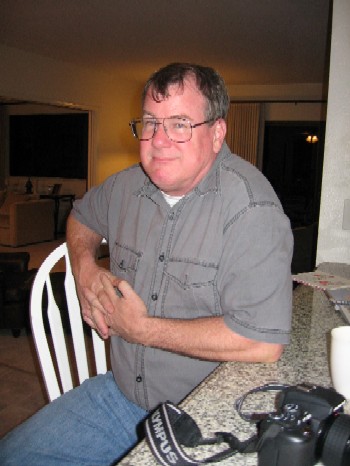