Love it or hate it, you can’t escape it: the Ranch.

By far the most abundant architectural style among Silicon Valley homes is the ranch. A recent resurgence in interest in this unique and pervasive house design suggest it is regaining popularity, and there are plenty of reasons to love it! Here we’ll take a peek at the history, how to identify, and the function behind the ranch design. Ready to meet America’s dream home? 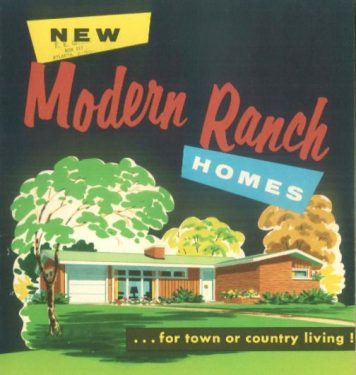 by the National Plan Service, Inc (1956) on Archive.org – Click to see

Back on the Ranch: A Brief History

In the early 1930s, San Diego designer Cliff May took the architectural world by storm with his spin on the Spanish colonial revival home. Inspired by adobe ranchos and modern design with an emphasis on comfortable California living, May developed this unique style. This soon evolved into the quintessential California ranch style.

It’s no surprise that the ranch has come to be known as a suburban style. Its popularity was widespread during the booming post-war years through the 1970s, peaking in the 1950s with ranch homes accounting for as many as 9 out of 10 new homes! (Witold Rybczynski, p 207)

Having saturated the market for decades, and with buyers wanting bigger homes, the market shifted away from building the sprawling single-story ranch in the later decades of the 20th century. Still the design retained popularity in the resale market. With more ranch homes celebrating their golden jubilee (some of the earliest are approaching 90) and some gaining historic designations there has been a renewed interest in ranch architecture over the last decade or so.

“Today, almost any house that provides for an informal type of living and is not definitely marked by unmistakable style symbols is called a ranch house.” (Sunset Western Ranch Houses (1946), IX – 1946).

END_OF_DOCUMENT_TOKEN_TO_BE_REPLACED

f you are house hunting in Cambrian Park, there’s a gem of an opportunity at 2156 Ebbesen Avenue in the Villa Cambrian subdivision (Parker area) near Union Avenue and 85. This charming home is located on a quiet street  and has been beautifully updated throughout. It’s updated throughout and enjoys highly prized Union Schools.  Fantastic commute location, too! 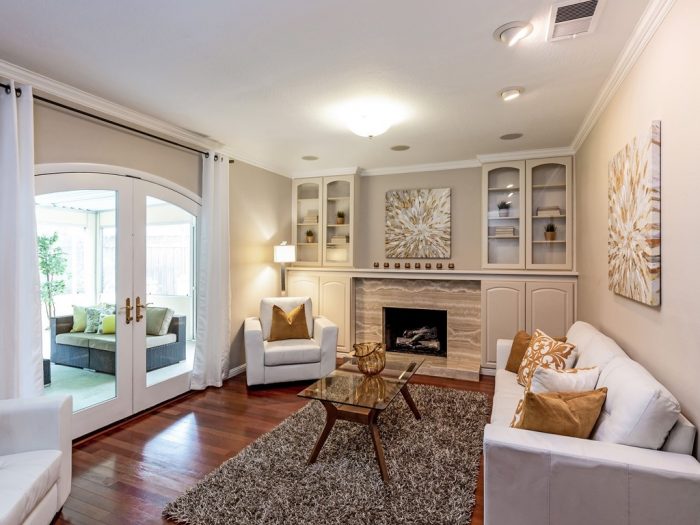 This updated home has many upgrades! 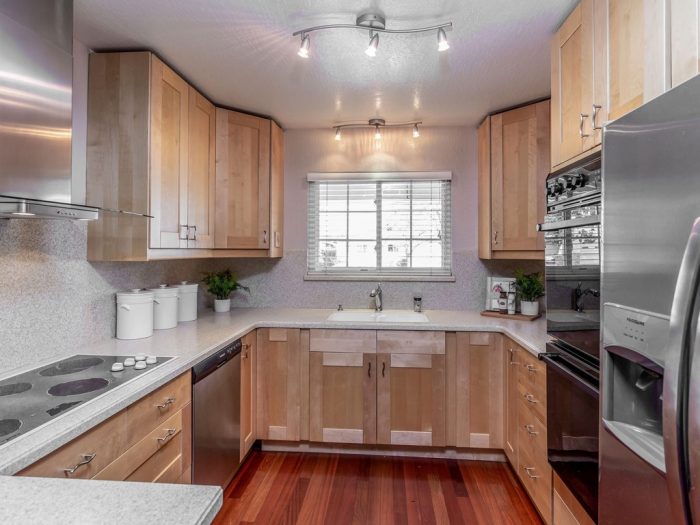 View all the photos and get more info at CambrianHomeSale.com 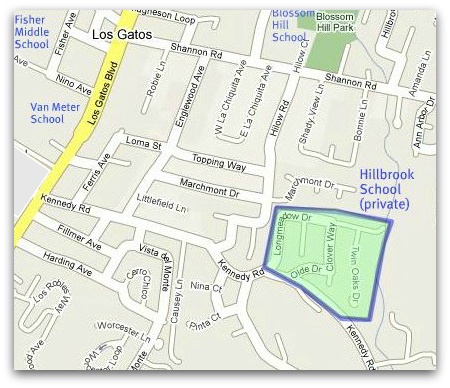 A Los Gatos neighborhood which is “close to town” but feels further out is the highly sought after Surrey Farms area, located off Kennedy Road less than a mile from Los Gatos Boulevard, and less than 1.5 miles to all the local public schools:  Van Meter or Blossom Hill Elementary, Fisher Middle, Los Gatos High. Adjacent to Surrey Farms is the independent Hillbrook School.

There are about 70 single family homes or houses in Surrey Farms, most of them on quarter-acre to half-acre lots, but a handful are on over half an acre, and four are over one acre.  The houses were mostly constructed from the mid 1950s into the mid 1960s, though development has continued since with over 30% of homes built between the 1970s and 2010s.  Original construction was all done in the “ranch style” and consisted of about 2,000 to 3,000 SF in most cases.  Today many have been remodeled, enlarged or even fully rebuilt, and the home sizes are bigger, currently with 50% of them over 3,000 SF and more than 15% over 4,000 SF. END_OF_DOCUMENT_TOKEN_TO_BE_REPLACED 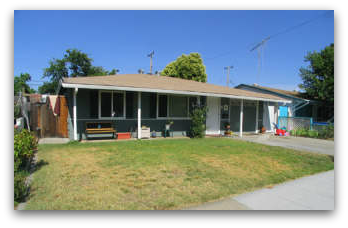 The Hacienda Gardens subdivision in San Jose straddles the Willow Glen and Cambrian districts, and it enjoys the highly regarded Cambrian schools. Homes and lots tend to be a little on the small side, so prices are relatively affordable as Willow Glen or Cambrian neighborhoods go, especially for such a strong school district. As San Jose real estate goes, this is a good value area due to great schools, more modest prices and lots of great amenities in the immediate area.

What are homes like in the Hacienda Gardens neighborhood?

There are around 550 houses in this San Jose subdivision. They were built originally in 1953 and 1954, though some may be newer or rebuilt since then.  Ranch style homes, they were constructed with 3-4 bedrooms and 1 or 2 bathrooms and came with an attached one or two car garage.  The builder used slab foundations and wall heaters, but many home owners have since added forced air heat (and central air conditioning).

There’s some new construction close to the shopping center too – it was built in very recent years. When I get more info on those homes, I will update this article.

Where is the Hacienda Gardens area? 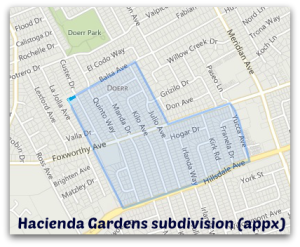 This corner of San Jose is entirely in the 95124 zip code, but about one third is north of Foxworthy (and just south of beautiful Doerr Park), which our MLS refers to as the Willow Glen area, and the other two thirds is between Foxworthy and Hillsdale, just west of Meridian Avenue, in the Cambrian area.

Adjacent to this neighborhood is the Hacienda Gardens Shopping Center, which runs between Hillsdale, Meridian, and Foxworthy Avenues. In recent years that shopping center changed hands and has been given a gorgeous facelift, making it a place neighbors will appreciate having in close proximity. It is home to a good-sized Rite Aid store, the long-term tenant Hometown Buffett, and a number of other restaurants offering pizza, Chinese food, and BBQ as well as other shops, institutions, and stores, such as Wells Fargo. END_OF_DOCUMENT_TOKEN_TO_BE_REPLACED 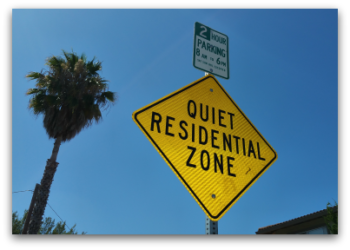 The University Square neighborhood in Santa Clara is walking distance to Santa Clara University. I grew up there, riding my bike in the forbidden college walkways, and recall my Realtor mother referring to the area as “Little Professorville.” That was a reference to a lovely Palo Alto neighborhood in the shadow of Stanford University. She wasn’t wrong – we knew some professors who walked to SCU each day from that neighborhood, including my grandfather.

Where is the University Square neighborhood?

The neighborhood may not have exact boundaries, but appears to be bordered by Park Avenue on the east, Washington Street on the west, the University to the north, and Newhall Avenue to the south.

The area closest to the campus is fairly congested, both with density of housing and the amount of cars parked everywhere. This is where you’ll see the reminder that it’s a quiet, residential zone. 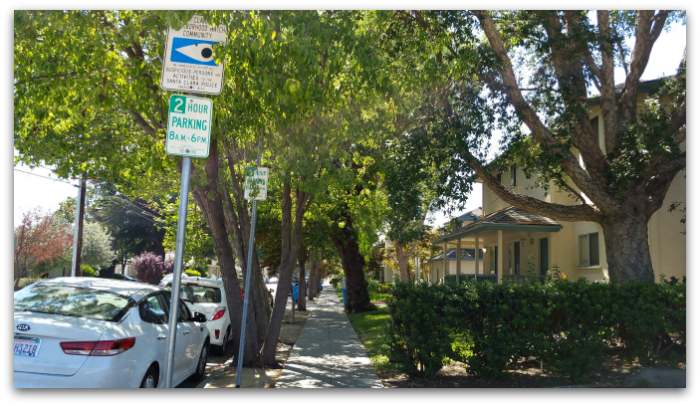 Get past Poplar, though, and suddenly it’s a completely different feel, with almost no cars on the street and homes being spread further apart. 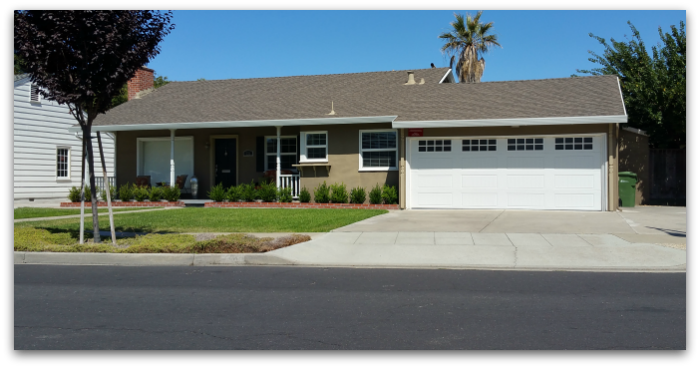 The homes found between Washington and Park, and along Alviso Street, are mixed architecturally. Some streets, like Circle Drive and College Avenue, are primarily ranch style houses built from 1955 – 1950 (some of the county records say 1900 – that just means they lost the records and don’t know!). Some of these have been expanded tremendously. The house I grew up in as a child was 1400 square feet, but it’s been added onto a couple or more times and is now more than 3000 SF.

Hilmar Street is older, mostly built in 1940 with a mix of styles, including Cape Cod, Tudor, and Bungalow. Most of the homes have detached garages, and on the south side of one block, the garages are accessed by an alley! We do not have many areas like that in Silicon Valley, but it makes the front of the home look almost like a movie set. That street is also lined with Cherry trees which explode with blossoms each spring, making a beautiful sight. Here’s a photo I took on February 14th, 2006 of that street. 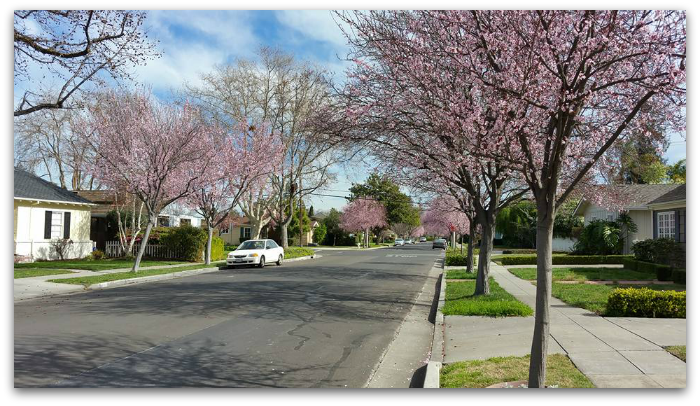 And one more view, from the same day. 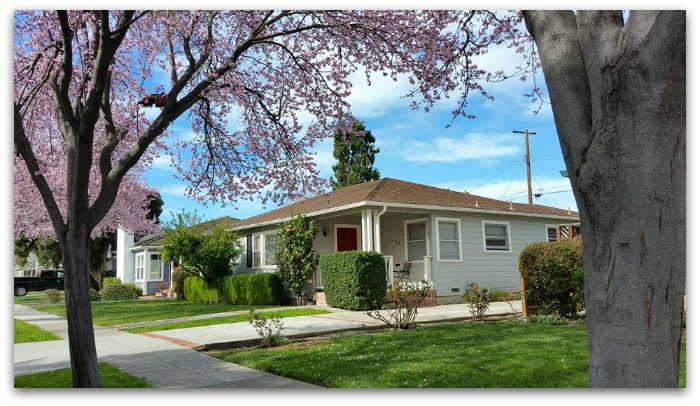 The homes here are mostly on 6000 to 9000 sf lots, and range from 1400 to 2500 SF in the majority of cases. There are 2 car garages. In the older houses, the garages will be detached, but in the ranch style houses, they are attached. 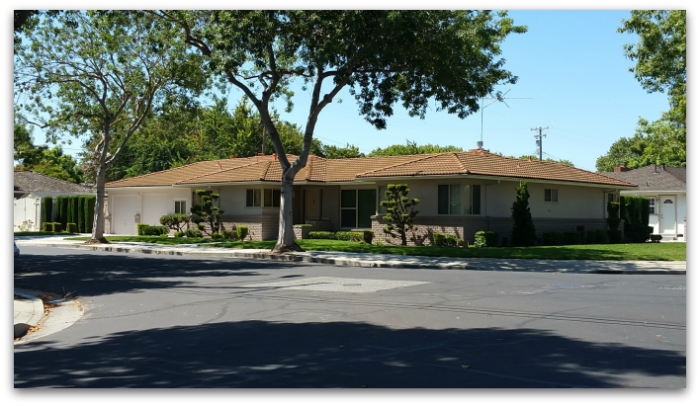 There are sidewalks throughout the University Square neighborhood. Often there’s a sidewalk strip, meaning a space for trees and other landscaping between the street and the sidewalk. Other times, the sidewalk is directly adjacent to the road.

This is not a pretentious neighborhood. The homes are mostly fairly modest, middle class homes. But they are convenient for both the university and for a trip to downtown San Jose via either The Alameda or Park Avenue. There’s a lot to be said for not needing a freeway with today’s congestion! As it is scenic, well maintained, and convenient, it’s also expensive, with home prices running about 20% more than the county average for a single family house. 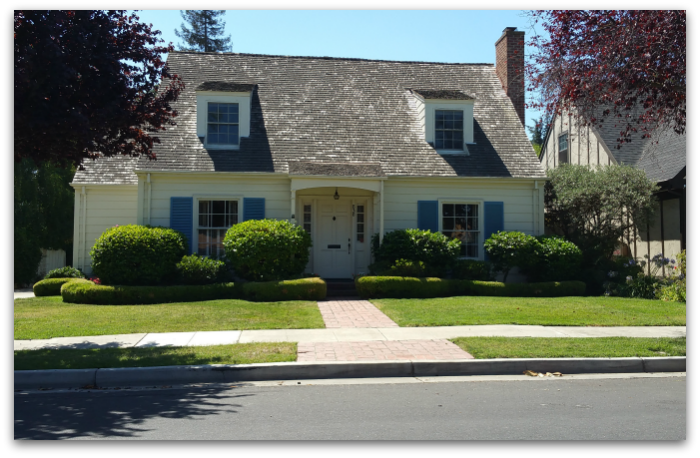 Here’s another lovely home on Hilmar. 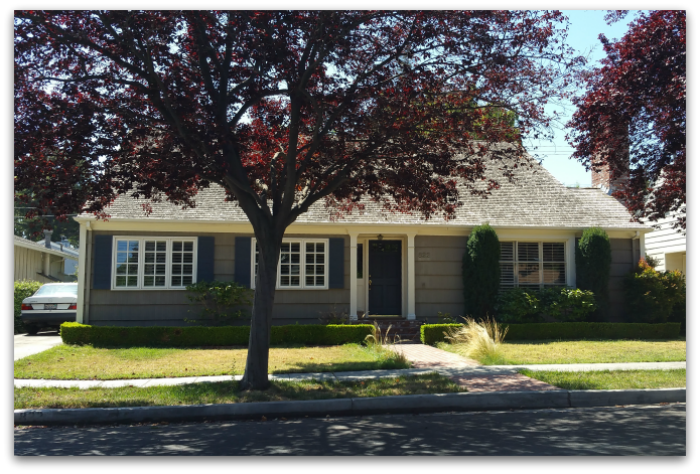 Want to check out the neighborhood some more? Browse the listings of University Square Santa Clara homes for sale here:

To see what’s for sale, pending, or recently sold in the University Square neighborhood of Santa Clara, please visit this link:
http://idx.diversesolutions.com/link/447810#-

Today I was wondering which of these types is “in style”, making them sell faster?   END_OF_DOCUMENT_TOKEN_TO_BE_REPLACED

Recently I had the pleasure of listing a fabulously unique property for sale.  For those who love “mid century” houses, this one is a must see, as it is in pristine, original condition and is also located in a fantastic location next to Coyote Creek at the corner of two no-through-streets.  It’s a quiet, park like pocket of Central San Jose, off the beaten path yet close to everything!

The address is 402 Terrace Drive, San Jose 95112 and I will be holding it open this weekend, Sept 22 & 23, 2012 from 2-4pm.  A two bedroom, one bath house, this rancher enjoys large rooms and an abundance of natural sunlight from the many, many windows.  Hardwood floors were recently exposed and they are beautiful!  Classic tile work in the kitchen and bath, an art form seldom seen in newer homes!

Please stop by!  Details on this fabulous opportunity follow, or get full details at