How much do location issues impact the ultimate sales price of a home? 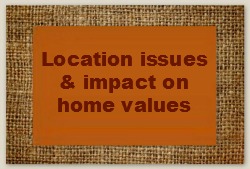 Savvy Silicon Valley home buyers tend to look at properties with an eye toward what they can change versus what they cannot change.  It’s a pain, but not really so hard, to make cosmetic fixes or upgrade a house or condo.  It’s more work, but still possible in most cases, to move walls around.  With some houses, an expansion may be an option.

But the one thing that cannot be changed is location issues. Things too nearby like high voltage power lines, train tracks, freeways, schools, busy roads, commercial properties, less expensive properties or types of residences (such as apartment buildings) will pull the property value down.  Similarly, being on a T intersection, having neighbors with run down houses will also impact pricing because again, the home seller cannot control or mitigate their impact. The question is how much of a home pricing impact will it be?

From a slightly busier than normal street to a quieter one, it could be as little as 3-5%.  Being directly on a main road, it could be 10% or more.  Pile up several unfixable issues and it will possibly be more, perhaps 15%, or higher. In general, 10% is a good working number to use but it could be too high or too low based on your particular situation.

Recently some of my clients looked at a Cambrian (San Jose) home for sale and used a similar sized property on Blossom Hill Road as a “comp”.  But they didn’t want to adjust very much at all for location.  This led them to writing an offer that was not competitive in a multiple bid situation.  Interestingly, I have another sale going in which that same house on the busy road was used by the appraiser as a comp.  How much did that location issue ding the BHR house?  The appraiser docked it $75,000.  That is very significant, it was about  9% of the value of the BHR home.

This past week, there was a terrible car accident on Leigh Avenue, which is a much quieter street than Blossom Hill Road.  There were two teens who were racing their automobiles on Leigh, close to Leigh High School.  One car plowed into a house on that road, and left a mother in the home in critical condition and several others sent to the hospital with significant wounds.  Apparently two other times in recent years, other cars have similarly hit houses on that same stretch.  I have lived within a mile of that part of Leigh for over 20 years and did not realize how very dangerous it was – normally, it doesn’t make the news.  However, I do have clients and friends on another stretch of the same road in the Willow Glen are of San Jose, and a driver once erred and struck their two cars, which had been parked in the driveway.  This doesn’t tend to happen so much on quieter, less traversed roads.  Think that sort of thing won’t impact the sales price or market value? Think again.

Finally, I should add that one other element that matters is the real estate market conditions at the time of sale.  In a deep buyer’s market, it’s likely that the penalty for location negatives will be greater.  And in a red hot seller’s market, when inventory is very scarce, the cost will be a little less.