How to fix incorrect property records in Santa Clara County? 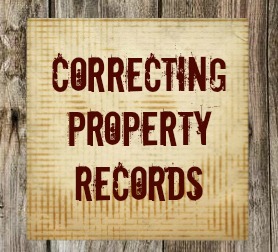 Sometimes public property records are wrong or have missing information.  How do you go about correcting these kinds of issues?

In Santa Clara County (San Jose, Los Gatos, Saratoga, Campbell etc.), you must go through the county tax assessor’s office to address these errors. Here’s what you need to do:

Why are the public records on real property sometimes wrong?

Lots of things can cause the problem with incorrect public property records.  Here are a few potential reasons why the records could be incomplete, inaccurate, or missing altogether.

Some folks will tell you not to worry about correcting the public records (and in some cases, it’s not easy to do).  But real estate consumers are savvy and have access to the official data on your lot and house quite easily now.  If you say your home is a certain size or has particular features but the public records don’t reflect it, that puts a question in the potential buyer’s mind: what’s wrong? Why don’t these line up?  Best to do what you can to get the reality of your property in line with the public records so it won’t be either a problem or a rush to fix it later.

Once in awhile, someone will tell me that they do not want to correct the county’s official public records for fear that it would trigger a reassessment of the home’s value and increase the taxes.  I am not allowed to give tax (or legal) advice, but if this is worrying you, call up the tax assessor’s office and see what they have to say.  You might be pleasantly surprised.