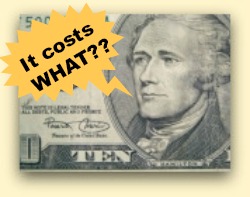 Today I spent a little time gathering the month over month and year over year median sales price changes in Sunnyvale from my Santa Clara County ReReport (you can do it too, it just takes time). Sunnyvale has felt like a bubble in that the appreciation has been too steep, too long for it to be sustainable.

Is it a bubble?  The market is calming down or leveling out a bit in many places – but how about Sunnyvale?.  Jobs are strong. Many firms are hiring. There remains a housing shortage.  But the rate of appreciation has been crazy high.  Rather than speculate about how good (sellers) or bad (buyers) it is, let’s see how strong the change has been.

The image below shows the increase or decrease of the median sales price for single family homes in Sunnyvale, first month over month, and then year over year from May 2011 to May 2013. The the last 12 months, the year over year average change to the median sales price has been a whopping 22%.  One month it was 60%! (It was when that was happening that I screamed “bubble” on this blog.) 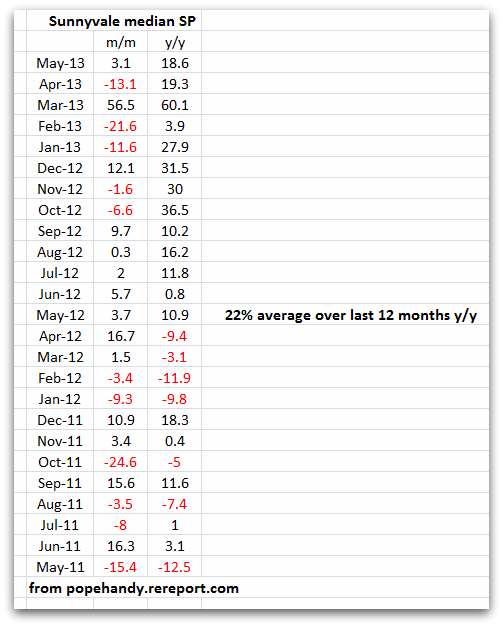 Clearly, these numbers hint that things are a little out of whack.  But the median sales price isn’t the whole story. Let’s look at the median sale price to list price ratio and also the days to sell for this same city and timeframe.  This info I pulled from MLSListings.com. 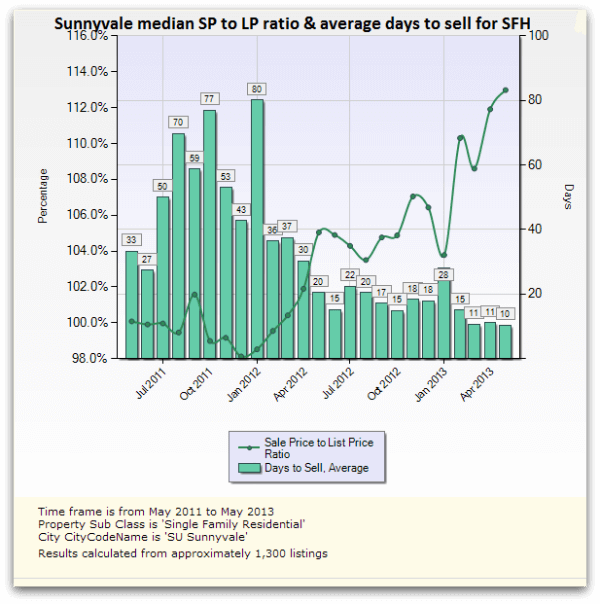 We are hearing about things calming down, but June closings (reflected in the last green bar on the right) are averaging 10 days to sell.  (It’s like the limbo dance. How low can it go?) But a word of caution – please remember that these June closings were sales in May. By the time we see it, it’s old news.  So perhaps the slowdown or leveling out we hear about anecdotally now will show up only in July’s numbers.

Finally, what about the actual cost of purchasing a 3 – 4 bedroom house in Sunnyvale?  To check the year over year appreciation, I ran the numbers on MLSListings for homes with this criteria:

Here’s how they stacked up:

Perhaps the easiest way of discussing what’s happened is to focus on the real cost of purchasing (though of course it’s always price and terms, and we don’t have data on terms such as free rent backs).  The same type of 3-4 bedroom house cost an average of $959,951 in May 2012 and jumped to $1,130,287 by May 2013.  That’s a difference of $170,336 or an 18% increase in home prices.  (By comparison, the year over year median was up 18.6% for all houses in Sunnyvale and the year over year rise for the average sales price was up 27.3%.)  Different schools and price points will have different results.  But to have the cost of a house vault upwards by 18% is really staggering.

Viewed another way, what was lost in that same year was the lion’s share of the down payment.  Many people got priced out of the market because the money they saved was essentially overwhelmed by the steep appreciation.