Is the Silicon Valley market cooling? 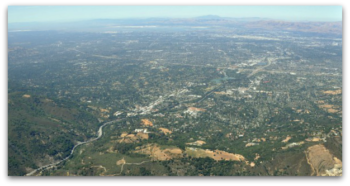 Silicon Valley market cooling is underway, as we have been reporting here for a few weeks. Sometimes the shared real estate agent experiences foretell the shift before the data does; now is one of those times. In fact, we don’t actually have data for all of the hallmarks at play in a transitional market.

For a few weeks, there have been rumblings within the Realtor community of a change in the real estate market. The observations and comments include these:

Silicon Valley market cooling – what does the data say?

The information on closed home sales is only a partial reflection of what’s happening, but it’s important as it does provide much needed perspective.

One of the most useful charts we can pull from MLS Listings is the combined Days on Market and Sale Price to List Price Ratio graph. It’s a good way to get a quick take on things.

Here’s a look at the last year, including the first part of June 2022 showing the Silicon Valley market cooling with longer days on market and smaller sale to list price ratios than we had a few months ago. 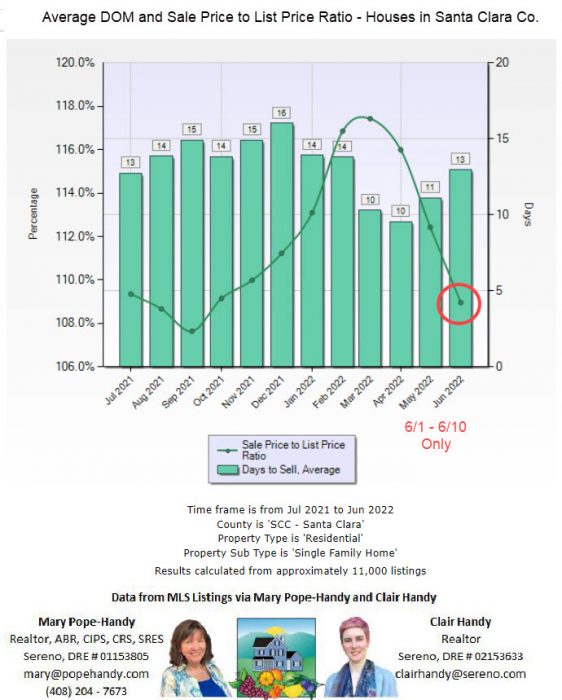 So far, this doesn’t look like much – we do have seasonal changes, which is why we like the year over year view for an anchor. Yes, June is continuing the cooling trend seen in May and in April. Is that alarming? Somewhat, yes, because May is often the peak of the market – not March.

What about the Days on Market?

The Days on Market are incredibly short, but they are not as short as March or April this year, which is another indicator of the Silicon Valley market cooling down a little.

How does this compare over time? I went back as far as January 2010 to get some perspective. Our Santa Clara County market didn’t really start to take off again until 2013, so the years prior to that can give you a sense of what a slower or cooler (but not crashing) market can look like. Most years, the shortest days on market for the calendar year are in late Spring, frequently in May or June. This year it’s March – April. That is a change. 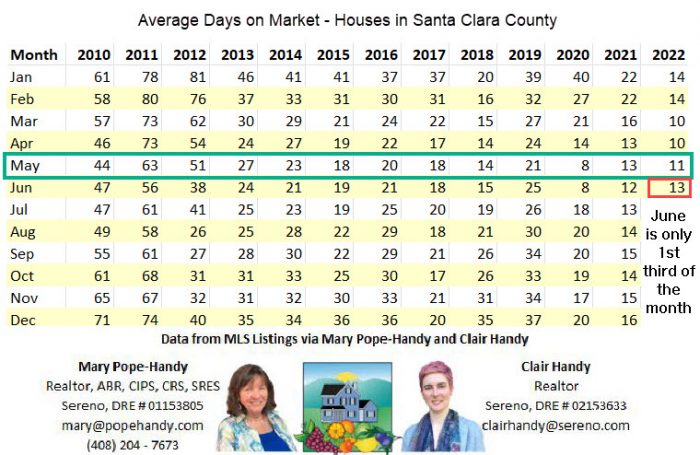 That said, the days on market for June so far (only 1/3 of the month) are longer than both the month before and the year before. Except for the Covid years, however, it’s on the low side of normal for recent years.

The sale price to list price ratio is better seen in a graph than a table. Peaks and valleys are seasonally normal. Usually the highest sale to list price ratio is found in late Spring (usually May, sometimes June). It’s not odd for it to drop in the second half of the year. What seems strange is that it’s doing it so early in the year. That is what seems to have gotten the attention of many consumers and real estate professionals. 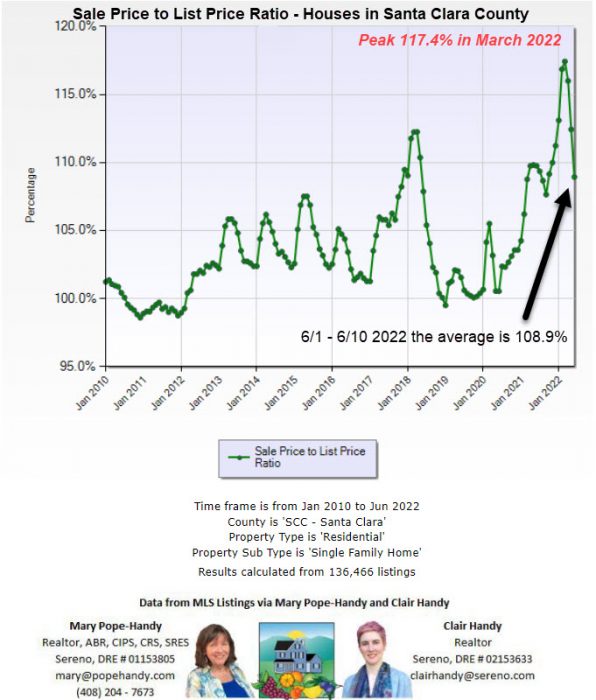 Is the Silicon Valley market cooling, or is this seasonally normal?

Although the Silicon Valley real estate market is not a monolith, but instead comprised of many micro-markets, as a whole, the housing market is decidedly in a cooling trend. I believe it is beyond what we would call “seasonally normal” for June and the turn happened earlier in the year than normal. Some markets and some price points are cooling more than others. It’s not just here, but nationwide, where luxury home prices are sinking.

All of that said, to know what’s happening, it is absolutely imperative to drill down to YOUR market, whatever it may be.

We are overdue for the appreciation to slow down or to level off. Ever since Covid hit, we’ve been in hyperdrive. Then when interest levels finally started to rise, many fence sitters became determined buyers. Add to that the war in Ukraine, the stock market tanking, and a recession possibly looming, buyers are backing off. Homeowners with a fear of missing out are hurriedly getting their properties on the market. That increase of inventory is contributing to the situation.

Will we have lower home prices?

Real estate economists are not predicting lower home prices for 2022, just a flattening out of appreciation.

If you are interested in selling or buying a home, please reach out to us – email is preferred as a first step.