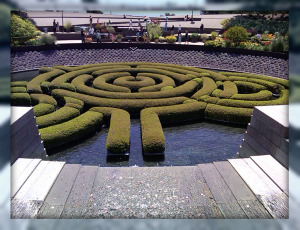 June 2010 is Global Labyrinth Month, so now is a great time to learn a little about the history of the labyrinth and find some local ones to enjoy.

What is a labyrinth? Luckily I found a comprehensive labyrinth site which explains that it’s thousands of years old and is (and has been) used for prayer and meditation by many cultures and religions. They can be in all kinds of materials: sand, pavement, rock, paint, landscape… Most are permanent but some are now portable or temporary.  Some are inside, some outside.  I have seen them in several religious settings and recently was invited to a “labyrinth dedication” party at a friend’s backyard in the Cambrian Park area of San Jose too, but was surprised to learn how widespread it is beyond my own experience.

You may have heard of or seen the labyrinth at Chartres Cathedral in France (if looking at the amazing stained glass windows there didn’t capture your entire attention for several days). This may be one of the most popular ever.

Where can you find a labyrinth in or near Silicon Valley?  I found lots of sites identifying public and private labyrinths. One labyrinth locator site  indicated 271 of them in California alone!  Here are some that I’m aware of, but I invite readers to post comments with other locations.

Interestingly, not every site with a labyrinth is religious in nature. The Santa Clara Valley Water District Headquarters at 5750 Almaden Expressway (between Coleman Av. and Blossom Hill Road in Almaden Valley) has a labyrinth in the garden right next to the Los Alamitos Percolation Ponds. You can actually see it from the satellite view of Google Maps.

The First Unitarian Church at 160 North First Street, San Jose (downtown San Jose) has a labyrinth which is open Monday through Friday from 11:30am to 1:00pm.  A great lunch hour break!

Stanford University’s Memorial Chapel (555 Waverly) has a portable labyrinth (pads with patterns) which is available every Friday from 8am to 1pm.

Also in Palo Alto, All Saints Episcopalian Church has a permanent labyrinth outdoors which is available during daylight hours (but avoid Thursday and Friday at lunch as that area is used for a regular event).

Willing to venture a little further north?  Notre Dame de Namur University in Belmont has a labyrinth next to the Cunningham Memorial Chapel. I was able to find this one on Google Maps, too, it’s just to the right side of the chapel so is not obvious from the steps.

In San Francisco, Grace Cathedral on Nob Hill (Episcopalian) features a very popular labyrinth which is an exact replica of the one at the Cathedral in Chartres, France.

There are many more labyrinths all over the San Francisco Bay Area and the Monterey Bay Area too.