Is There More Value in a Corner Lot, Flag Lot, or Normal Lot? 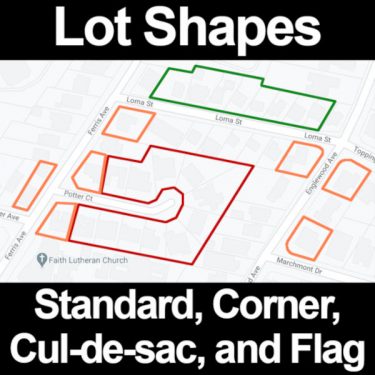 What kind of residential lots and land will hold value the best in Silicon Valley?  Your choices may include a corner lot, flag lot, cul-de-sac lot, a zero lot line parcel, oddly shaped land boundaries, and standard lots.  If you are concerned about resale value and appreciation, it’s helpful to know what most buyers ordinarily prefer.

While some San Jose area home buyers want a corner lot (more light, fewer adjacent neighbors), for most, the extra traffic and noise outweighs the pluses. An issue that home buyers often raise with corner lots involves headlights hitting bedroom or other windows as cars turn. There is some concern about drivers missing the turn and hitting the house, too. (This is also a worry for buyers looking to purchase a home on a busy road.)

Cul-de-sac lots are also highly valued among many buyers, though not all. With the court location comes a lack of street parking, especially at the end, and a lack of exit routes. A while back I held a listing open in Los Gatos that was on a cul-de-sac and the idea of only one way in or out spooked one buyer who otherwise really liked the location, which was close to Los Gatos schools. Homes at the end of the court also have irregularly shaped lots, and they tend to be harder to utilize as well but offer large backyards. So there are plusses and minuses, especially at the end of the court.

I’d like to add that pie shaped lots, or those with many angles, often seem to have the lot size misrepresented on county records.  Many times I’ve found that a large parcel on a cul-de-sac will be ascribed the same size as nearby plots even if clearly it’s far bigger. The geometry is a headache, but you can use Google Earth to do an approximation of the actual square footage and then check the perimeter against the perimeter found in the Preliminary Title Report. The odds are good that if you get the correct size of the boundary (perimeter measurements added together) on Google Earth, you’ve got the correct lot size. Own a house with such a situation? Bring it to the county tax assessor’s office and get your property’s record updated. END_OF_DOCUMENT_TOKEN_TO_BE_REPLACED