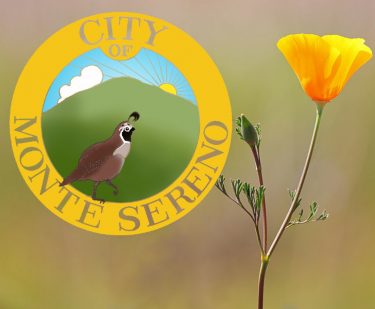 Sitting at the base of El Sereno, part of the Santa Cruz Mountains, Monte Sereno is an upscale residential community snuggled between Los Gatos and Saratoga, California. The population is very tiny with about 4000 folks living in Monte Sereno any given time. It is composed of about one and a half square miles. This small city shares many services with the town of Los Gatos (such as schools and police). There are no businesses in Monte Sereno, only homes, the city’s offices, and the post office.

Real estate prices are high in this low-crime city, and while there are some modest homes, there are also some palatial estates featuring extreme amenities.

The geography is mostly flat to gentle hills, with much of it wooded. Redwood trees, oak trees, madrone and many others cluster together in the nooks and crannies of Monte Sereno. There are open places too, of course, with grassy fields. Along Daves Avenue, there are several streets that tie in together with a common horse stable, and it has meandering equestrian trails. Most of those homes are on half acre, level lots, with generous ranch style homes that back to the trails. This is a great neighborhood for horse lovers!

If you have a chance to visit Austin Way behind La Hacienda Restaurant and Inn, you’ll be delighted to find an old brick road, part of the heritage of Monte Sereno. And on the other side of Highway 9 along Austin Way, you’ll see a historic building recounting the city’s agricultural past in Austin Corners.

John Steinbeck once called this area home – but later decided the rural hamlet was too crowded, so moved into the Santa Cruz Mountains to regain his serenity! It is said that he wrote Of Mice and Men while living here.