A Silicon Valley home seller’s joy and buyer’s nightmare, multiple offers are back and exceedingly common in San Jose and nearby areas right now.  It has been true for many months that the most affordable houses in Santa Clara County, especially those under $450,000, are often selling with several purchase contracts on them (about 25% of which are investors, and many of those are “all cash“).  One Sereno Group real estate agent shared that their client was up against a whopping 37 other offers last week for a house in the entry level pricing tier!

What’s new, then? The price points. Today we are experiencing the same situation in homes between $1 million and $2 million (though fewer offers) and sometimes higher still.  A few days ago I was involved with bids on a Saratoga house priced a little under $2,000,000 and it ended up getting 5 offers.  This wasn’t a turnkey property with a Section 1 pest clearance, but rather a nice house with “good bones” that needed work.

Why are we seeing so many multiple offers, and in such a broad range of pricing, in Silicon Valley?

Feeding the frenzy are the low, rock bottom interest rates (for most real estate consumers in lower or mid range pricing), lower home prices than a year ago – resulting in increased demand – combined with a dire shortage of inventory, or lack of supply. (Some sellers are waiting until later this year, when they think that they can make more from the sale of their home, too.)  If that weren’t enough, we have money pouring into the valley due to the initial public offerings of companies like Zynga in Los Gatos and LinkedIn and Google in Mountain View plus Facebook in Menlo Park.  And don’t forget Apple, in Cupertino, which is now trading at over $500 per share!  Even for companies which are either not yet public or there’s a waiting period for selling stock, there are means of cashing out some value via private exchanges or borrowing on options. Some tell me that this has been the case for a year!

These high tech giants are fueling more than just the luxury market in Mountain View or Palo Alto.  Much of Silicon Valley is feeling the impact as some workers may be commuting from Willow Glen, Blossom Valley, Cambrian or elsewhere.   Also, newer employees may have smaller bonuses or gains – just enough to get them into an FHA mortgage with a low down payment.  Where do you see those white, unmarked Google commuter buses? Or the silver ones from Apple?  Where you see them, there’s an impact underway!

The good news is that all of this infusion of cash is good for our local economy.  It’s a little tough on home buyers, or even people looking for rental homes, right now.  It will likely improve as the year goes on because inventory normally rises with the peak being somewhere in the summer most years.  No guarantee – sometimes it doesn’t behave “as usual”. Inventory has been down quite a bit over recent years, so much that the 4th quarter of 2011 for houses in Santa Clara County was off 43% from the same quarter 3 years prior. On a monthly basis, Jan 2012 was off 30% from January 2010. Please see trends below for last 2 years – typically, inventory does rise beginning in January or February.  In 2010 the rise was very dramatic but in 2011 it felt like nothing happened at all, the increase of homes for sale was so slight! 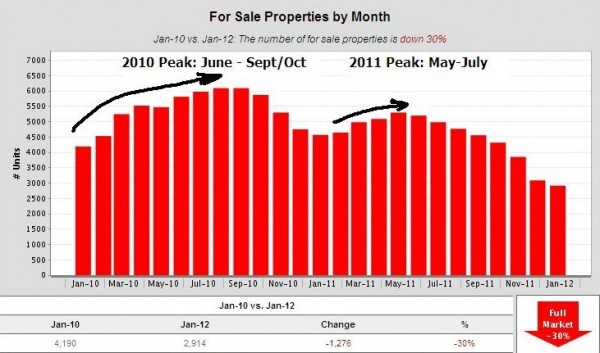 The new year has started out with a tremendous shortage of inventory.  There is pent up demand for people to be moving so I would expect it to burst through at some point – hopefully not to the extreme where it again pushes prices back down.