The Santa Clara County real estate market is a seller’s market which has heated up from the month before. Significantly, for single family homes, prices are up both month over month and year over year, and the sale price to list price ratio surged countywide from 100.9% to 104.4%.  That’s the highest it has been since July 2018. 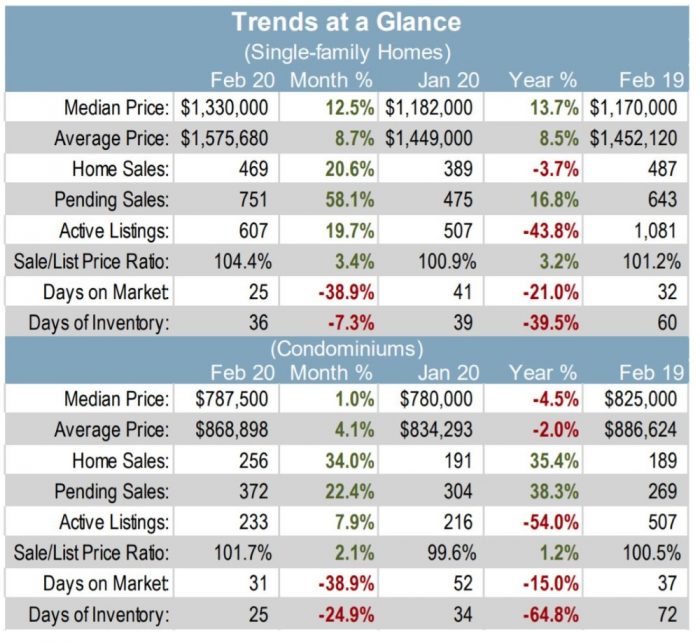 Inventory of single-family, re-sale homes was down 43.8% compared to last year. That is the sixth month in a row inventory has been lower than the year before. As of March 5th, there were 607 homes for sale in Santa Clara County. The average since January 2000 is 2,703.

The median sales price for single-family, re-sale homes in February was up 13.7% compared to last year. It was up 12.5% from January.

The average sales price was up 8.5% year-over-year. It was up 8.7% compared to January.

Inventory is just incredibly low, while demand remains fairly strong, so homes continue to sell quickly. Below please find the year over year view of the months of inventory of single family homes sold in Santa Clara County from January 2014 to Feb 2020. Note that early 2020 looks a lot like early 2018. The average since 2003 is 89 days, or just shy of 3 months of inventory. 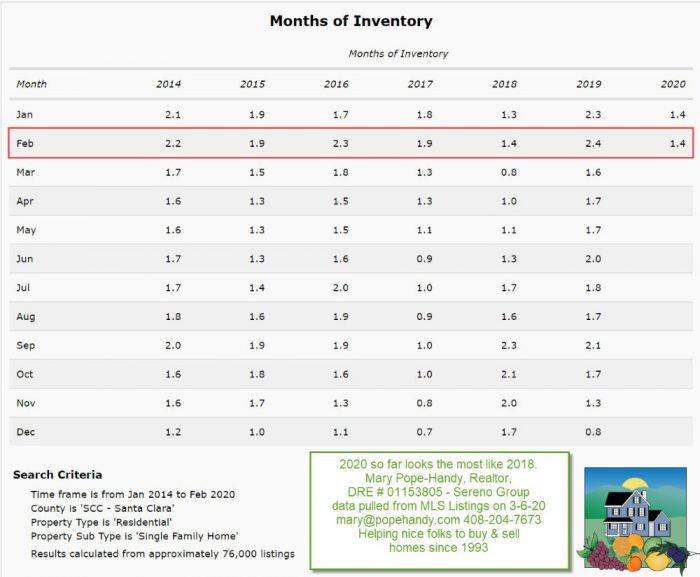 END_OF_DOCUMENT_TOKEN_TO_BE_REPLACED

The Santa Clara County real estate market has been in a cooling trend, but it warmed slightly in October and appears to be warming again with the January sales so far. Prices are certainly down significantly from the peak pricing a few months back, but sellers will welcome the fact that sales prices are moving upward again. If this continues, we may be revisiting the normal seasonal patterns – which many economists have predicted would be the case. 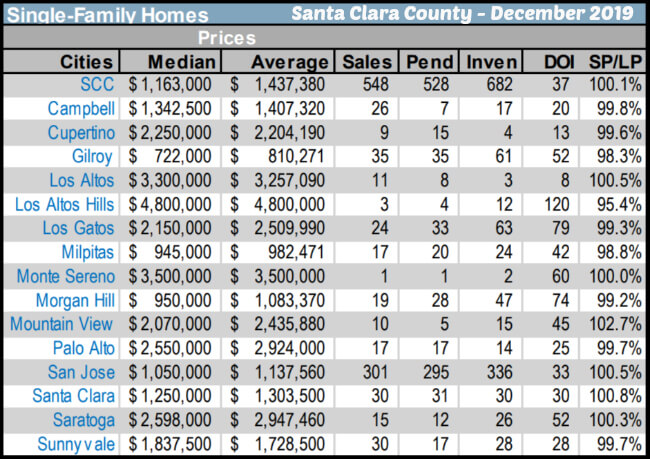 The average sale price to list price ratio is still at 100.1% for the county, but is under 100% in many areas now. (And when I pulled that from the MLS just now for the first 15 days in January, I see that it has sunk to 99.6%. Days on market, though, shrank from 35 in December to 34 so far in January, interestingly.)

The numbers themselves point to a general movement of  values sliding – at least until October, when it ticked up a little, and again here in the first half of January, when we also see upward pricing from sales that went under contract in December. I’ll jot the median sale price for the county here – it’s a large enough pool of sales to be pretty reliable as a gauge of the real estate market in the San Jose area. I pulled this data directly from the MLS:

Between March and July, the median sale price dropped $100,000, or 6.89%. As you can see, it had also jumped considerably between January and March, and even at today’s lower median sales price, it’s still higher than January. It will be interesting to see where it ends up in January of 2019. 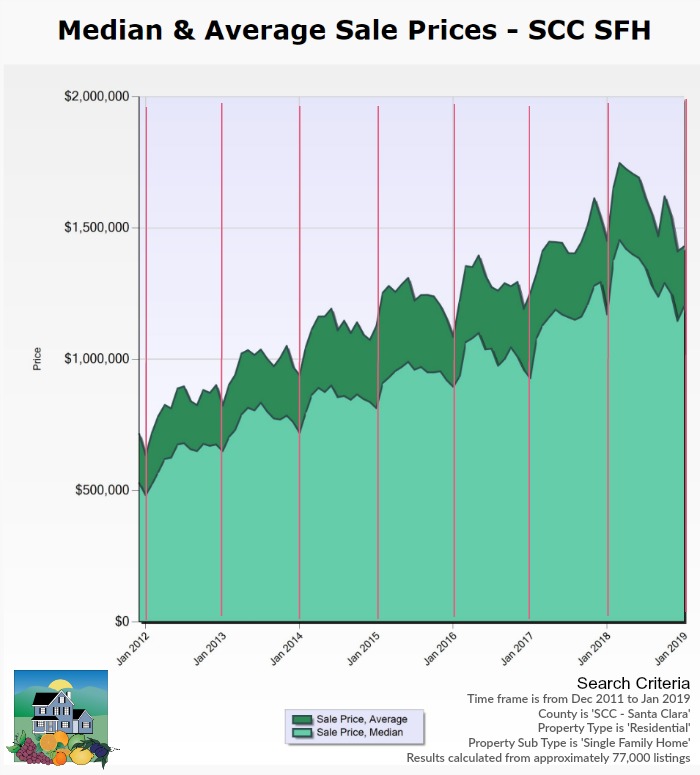 A quick look at the numbers for this month’s Santa Clara County RE Report:

Trends at a Glance

Bottom line, I still think we need to see what happens in February before we’ll know if we are returning to seasonal patterns or not. Right now, I don’t see anything that makes me think we are going into a correction right now.

When are property taxes due in Santa Clara County? 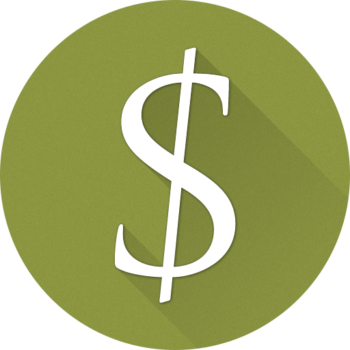 The schedule for when property taxes are due in Santa Clara County is not intuitive and confuses most people, at least initially.  The tax calendar is as follows:

Although you might expect the two bills to be due & payable 6 months apart, that’s not how it works!

Installment # 1 is due November 1 and is delinquent December 10th

Installment # 2 is due February 1 and is delinquent April 10th

Please note that the April deadline is very, very close to that for personal income taxes (April 15) and many homeowners accidentally send in their property taxes on the latter day.  This results in a costly penalty, so don’t be confused!!    (Also, do not count on mailing your payments by 11:59pm on the deadlines either – the tax assessor’s office does not work like the IRS! Payments are due by 5pm that day!)  Make sure you don’t cut it too close or you’ll find yourself paying 10% plus $20 more than necessary.

It is possible to pay your bill for your property taxes online, but the cost is significantly more than a postage stamp, so I don’t recommend it unless you are out of the area and cannot make your payment the normal way. (It’s 2.5% via credit or card – minimum $2.50 convenience charge.) You can also pay by eCheck for free, so that’s another good option if you are in a hurry.

Other articles of interest:

What Do Silicon Valley Seniors Need to Know About Moving Their Property Tax Basis When Selling a Home? 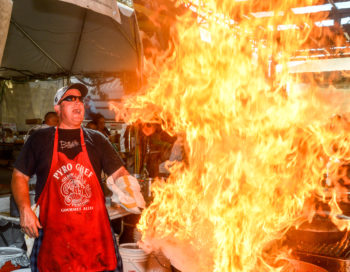 Greet the morning with the sweet smell of fresh Garlic in the air – the Gilroy Garlic Festival is back!

If you’ve ever caught the vivid aroma of the stinking rose early in the day it’s likely a breeze coming over the southern Santa Clara County city of Gilroy, the Garlic capital of the world. Whether you love or hate the pungent allium, this herb is a favorite for many foodies in Silicon Valley and around the world.

Gilroy celebrates their favorite bulb one weekend of the year during the Gilroy Garlic Festival, the last weekend in July. This year it’s back for the 38th annual event held on July 29, 30, and 31, 2016. So what to should you expect from “summer’s ultimate food fair?” Food, food, food, fun, shopping, music, and more!

Gourmet Alley is “all about the food” – classics like garlic bread, garlic fries, calamari, scampi, and sausage are available at the booths, and at the end aisle, watch the Pyro-Chefs stoke up five foot tall blazes from their frying pans. Weird food lovers will enjoy a plenitude of flavors from other booths around the festival, including free samples of garlic ice-cream, alligator and buffalo meat, or ice cream in a half cantaloupe. There’s also the range of standard festival food stalls, beer, wine, coolers, and non-alcoholic chilled drinks.

END_OF_DOCUMENT_TOKEN_TO_BE_REPLACED

If you are shopping to buy a home in Silicon Valley, you will be given a report, once in contract, regarding any endangered species‘ habitats on or near the property. How does this impact your use of the land, should you complete the purchase?

You might be surprised at how many at risk or endangered species there are in Silicon Valley. The Bay Checkerspot Butterfly has several areas in Santa Clara County which are impacted, including Communications Hill, areas near Coyote Valley and San Martin, the Silver Creek area of Evergreen and many other areas along the east foothills and south county. Others include: Golden Eageles, Tri-Colored Blackbirds, Western Pond Turtle, San Joaquin Kit Fox, Steelhead Trout, California Tiger Salamander, Salt Marsh Harvest Mouse, and many more animals, fish, birds and plants.  A couple of days ago, I was reading that the threatened  marbled murrelet, a sea bird which can roost up to 70 miles inland, is in Los Gatos (near Highway 9 and Daves, if not more places as well).  They nest in old growth redwood trees – something that Los Gatos, Monte Sereno, and Saratoga have in abundance near the hills!

Suppose that the area in which you want to buy a home is within the habitat of an endangered species such as the red legged frog, the famous subject of Mark Twain’s The Celebrated Jumping Frog of Calaveras County and our official state amphibian. This is information that will be listed within one or more of the property reports, so read the Natural Hazard Report, Environmental Hazard Report and Tax Report you get in escrow very carefully. Now that you know where to find this information, what does that mean? END_OF_DOCUMENT_TOKEN_TO_BE_REPLACED

In Santa Clara County, homes do sell in November! 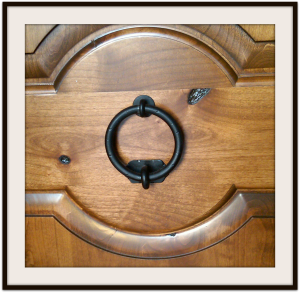 Today is the first of November. For many Santa Clara County home buyers and sellers, it marks the beginning of “the holiday season” and the end of the home buying & selling season. But is that always the case?

In my real estate practice (San Jose, Los Gatos and all over the county), normally I do have sales activity in November and December. Many times, clients want to be in their new home before the December holidays and the new year. Sometimes it’s for tax reasons. Other times it’s a late year relocation. Once in awhile, someone just wants Christmas, Hanukkah or some other major date in the new home.

This morning I logged onto MLS Listings to see the numbers of sales of single family homes in the month of November over the last dozen years or so to see what we could learn about November home sales in Santa Clara County. We don’t have a crystal ball for November 2014, but if annual patterns hold true again, around 800 homes are likely to sell this month. The lowest number in recent history was 510, and that was during the recession.  Here, then, are the counts for houses sold in SCC in the last 17 years (as far back as I could go on the MLS):

People still need to buy houses, for whatever reason it may be. The statistics tell us that they continue to do so here in November.  If you are thinking of selling your Silicon Valley home, don’t believe that you must wait until the new year.  A good, well priced, well presented, and well marketed home really can sell here at any time of year.  Unlike the northeast, we do not have terrible weather that makes showings difficult or unappealing.   If you’re interested in a fall or winter home sale, please call or email me.  We can discuss it, your home’s pricing and everything else relevant to give you good information on which to base your decision.

Today I’m sharing with you Silicon Valley real estate statistics which were presented to me by my company, Sereno Group. These are “by school district” and I think you will find them immensely insightful! First, though, a brief commentary on the overall findings, then statistics for single family homes (mostly houses but a few “duet homes”) in Santa Clara County, and lastly, the same info but for condominiums and townhouses.

Please find the real estate market statistics by school district in the Santa Clara County area next.  Please note that the San Jose Unified School District is extremely large and varied, and the numbers would be very different if you were narrowing it to Almaden Valley with Leland High School as opposed to some areas which are not performing nearly as well.