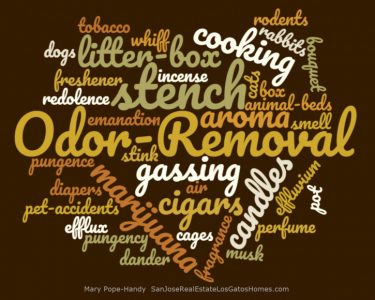 What can be done about malodorous smells generated in homes? This is a common issue that is raised by home buyers and sellers in Silicon Valley, where all kinds of situations can cause lingering fragrances deemed unpleasant by some home buyers. Those include sources from pets, smoking (cigarettes, pipes, marijuana, cigars), cooking, incense, candles, diapers, and so on. I had run into odor removal products in the past, but not something that would treat the whole home.

Recently I showed buyer of mine a condominium that smelled heavily of Indian cooking, which my client did not like. (it was not just in the kitchen, but in the bedrooms, too.) Apparently the sellers repainted, changed the carpet, and cleaned thoroughly – but the cooking aromas persisted.  The listing agent pointed me in the direction of a website, OdorRemoval.com. I’ve been selling homes for 26 years and had never heard of this service, so was intrigued both for the unit I’d seen but also as a resource generally.

The odor removal company name is Rainbow Services, and I spoke with Joe there about their business. He explained that the smells are at the molecular level and they can get embedded in the drywall, curtains, carpet and carpet padding, the floor boards, etc. “It isn’t about cleanliness”, he said. All those locations harbor the odors, which “off gas” (just like a new car off gasses a plastic like smell that can actually fog up the inside of your windshield).  In order to remove a stench from pets, cigarettes, cooking, and other heavy smells, it has to be addressed at the molecular level to stop the off gassing.  The product they use is supposed to target those malodorous molecules and binds to them to neutralize them.

How Our Guaranteed Service Works
The technology used by Rainbow Services consists of releasing odor-neutralizing molecules that permeate all the porous materials in search of the malodorous molecules everywhere they have permeated,  (walls, ceilings, cupboards, doors, sub-flooring, studs, etc.) Our neutralizing molecules then bind with the malodorous molecules converting them into a non-odorous compound. The entire odor cycle is eliminated permanently! We treat the entire interior structure and contents.

Joe told me that to do the odor removal they use machines and put them around the inside of the home. They charge a daily rate per machine. The number of machines needed depends on the size of the home.  Smaller homes need fewer machines.

How long do the odor removal devices need to run? It depends on how long the situation has been going on. If there was an occupant smoking in it daily for a year, it would be fewer days than if the resident had smoked there for 10 years.  The website says that they do free estimates, and when I phoned, I walked him through the particular listing at hand. In that case, it was likely to need a few units running for a week or more, and it seemed to run about $3,000 to $4,000 or so.

While that sounds like a lot of money, not removing the smells can be a real deal killer. Eons ago, I showed a house in which the owners had kept pet rabbits in one of the bedrooms. There was a terrible, terrible stench that was so bad that I simply had to leave the house – I thought I was going to be sick. You can imagine that in extreme cases like that a home will not appeal to as many buyers and will sell for much less. The loss on the sale price would be far more than the cost to eliminate the pungence.

Joe says that they don’t advertise and get a lot of business by word of mouth. Property management companies seem to keep them busy as tenants move out and sometimes leave smells that need to be eliminated in their wake. (He said that the fee is usually charged back to the tenants for a change in the condition of the property.)

I haven’t worked with this company, so am not writing a testimonial or endorsement, but do find their process of interest, and it could be very helpful for tenants (who need to return a home in the same general condition as when they moved in) or sellers (who need to neutralize a home to sell it for top dollar), so want to present this venue as a possible option to investigate. Rainbow Services promises a money back guarantee, so it’s worth checking out!

Buying and selling homes with pet odors, stains and other issues

What’s that smell? Odor problems in some communities (on the Move2SiliconValley blog)