Over improving a house for the neighborhood 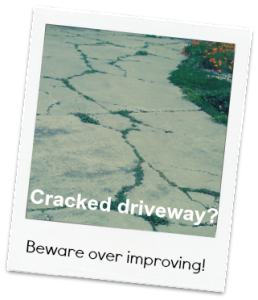 How do you know if you’re spending too much on your house, condo or townhouse?  How much is too much?

Over improving a house – some basic concepts

There are no hard and fast rules, but overall, it is best to not have the most expensive home on the street or in the area, either from added square footage, extreme remodeling or  using materials that are too expensive for the neighborhood. It is even worse if yours is the most expensive real estate by a wide margin – the wider it is, the worse!

There are two real estate principles which are helpful to know about and understand. The smaller, less improved or generally lower priced homes will pull down the value of a better home (that is the principle of regression).  Conversely, if your house or condo is less expensive than nearby homes, those more prices properties will raise your home’s value (the principle of progression).  In terms of getting the most back on your improvements, then, it’s best to make sure you can catch the tail wind of better properties and get pulled up by them, rather than have your improvements’ value pulled down by lesser properties.

Most of the time, we think of over improving a house as being a big picture thing, that is, the whole property has had remodeling or expansion in a manner which is too expensive.  Here are a couple of examples:

A few years ago, I saw a 100 year old house in central San Jose that had become quite run down and needed significant repairs; had it been in decent shape, it might have been worth about $500,000 or $600,000 (this would be the value of the house and the land, where the land holds about half the value).  A contractor went out and not only repaired the structure, such as pest damage, leaks and electrical hazards, but added magnificent features found in estate quality properties, such as huge amounts of crown molding, base, multiple recessed lights, and most lavish of all, heating in the bathroom floors.  The work done was to the extreme – the bill came in at around $500,000!!  This is a very clear case of over improving a house.

Because it’s overdone for the neighborhood, that house was probably only worth $700,000 at most at that time – so impossible to ever get the return when the owner eventually sells it when you consider that the land value remains at about $300,000 and the structure’s added costs equaled $500,000, a value gap of at least $100,000. (Dollars from about 10 years ago.)

So too with a Sunnyvale house that became decrepit. A contractor went in and practically rebuilt it from scratch.  The remodeling was paid for by a second mortgage, and because they over did it for the neighborhood, the house is now financially under water. It is now the most expensive property for miles around for homes of its size, and it’s a financial albatross.

It should be noted that it’s over improving can happen to just part of the property, too.  I’ve seen lavish yards, worthy of a luxury property in the hills, paired with a house that needs basic updating.  It would strike you if you saw this in reverse: a home fully updated but bare dirt in the front and back yards (unless it was new construction!).    Let’s take a driveway as an example.  If the whole neighborhood has older asphalt driveways, you might upgrade your driveway to concrete.  Your driveway is the nicest on the street, but it’s likely that over time, more neighbors will follow suit.  What might not be such a good idea is to put expensive pavers in for the driveway, since when most homes upgrade, it will be to simple concrete, not the more luxury item.

Similarly, I once sold a Cambrian house with a spectacular garage and a subpar house. The over improving was in the garage, and it was disproportionate to both the house and the neighborhood.

Do pay attention to neighborhood norms and values when planning your improvement, extension or remodel.  If you hold onto your home for a very long time, there’s a good chance that other home owners will update, remodel and expand too, over time, so the odds are better that you may not be over extended. But if you hope to sell in just a few years, you could find yourself short of where you hoped you’d be financially if you spend too much money on fixes.

Related Reading on over improving a house:

Beware over improving your property when preparing to sell (this site)

Is that bathroom or kitchen old, classic or antique? Should I remodel it? (this site)

Want to sell a home but can’t get started (popehandy.com)