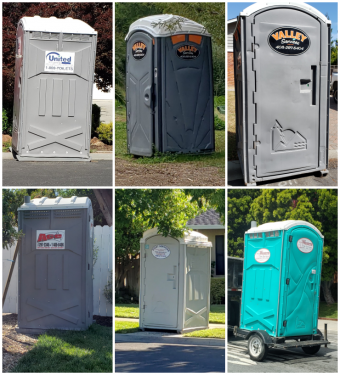 Have you noticed that there now seems to be a porta potty on every block? It’s a proliferation of porta potties! One might be tempted to call it a pandemic of bottomless proportions.

This panoply of modern day outhouses appeared en masse over the last couple of years. Of course, their appearance is the hallmark of home improvement or updating, at least most of the time.

Once in awhile it’s instead the hallmark of a stalled project. It can be a real challenge to get contractors to work on our homes and yards right now. The demand is tremendous and the waits can be long. Sometimes the lengthy stay of the temporary structure isn’t anyone’s fault.

That said, there do seem to be better and worse porta potty placement, and some really do overstay their welcome and become a problem – a neighborhood eyesore or blight. It might be said that like houseguests, portable toilets have a limited shelf life for desirability as far as the neighbors are concerned.

In this post we’ll touch on half bathrooms (created to serve a similar purpose), CCRs, and regulations regarding these portable toilets and where and how long they can adorn front yards.

After the outhouse and before the porta potty there was the half bath. Half bathrooms, sometimes called powder rooms, began being added to new homes in the 1900s so that guests and workers could use the facilities without using the family’s full bath, normally located in the bedroom wing, often upstairs.  It was more sanitary and more private.

Half bathrooms are found near the laundry room or garage, or possibly closer to the front door. I’ve seen them off of the primary bedroom, but this is not common.

When half bathrooms are situated near the garage or laundry areas, they are often  more utilitarian than fancy. When they are positioned closer to the living areas of the home, they may be more elegant.

Not every home has a half bathroom, and even when there is one, home owners may not want contractors coming into their home. Or they may not want to have to be home themselves to let someone in.

Porta potties solve the problem of  providing necessary facilities while not needing to open one’s house to workers.

Many neighborhoods, subdivisions, and tracts have Covenants, Codes, and Restrictions, or CC&Rs / CCRs. These are rules, a bit like zoning, that run with the land, Some restrictions or codes are now illegal, and hopefully soon they can be removed entirely from those documents. (Home owner associations or HOAs today also have CCRs that some consumers love, and some hate.)

Some of the restrictions are pretty reasonable, though. Prohibited in many cases were things such as:

Here’s an example of a broad restriction against “nuisances” listed in the CCRs for a house that Clair and I recently sold in San Jose:  “NUISANCES. No noxious or offensive activity shall be carried on upon any lot, nor shall anything be done thereon which may be or may become an annoyance or nuisance to the neighborhood.”

It’s broad! Today it might be more specific. But sometimes when it is very precise, it may not be broad enough. This same set of CCRs prohibited temporary structures “as a residence” but this was pre-porta potty pandemonium. So it’s not there. Do you think it would be today? Or would the time frame or location of said free standing restroom be limited or somehow restricted?

Unless there is an HOA which is collecting dues, often the old CCRs are unenforceable, but I have to wonder if they were being written today what would be said about portable facilities. Instead, most of what keeps suburban Silicon Valley in line (or somewhat so) are the zoning regulations and local laws. They don’t seem to say much about the movable toilets, though.

I was told by someone researching the issue that contractors can only have them at a job site as long as the work is ongoing. There do not seem to be many laws that prohibit having a portable water closet in one’s yard if the homeowner, not a contractor, ordered it.

Several years ago, there was an article regarding neighbors “raising a stink” over someone placing a portable toilet in her front yard on an apparently permanent basis for family parties. She didn’t want her large family all converging on her bathrooms inside, so she just bought a porta potty and took care of the maintenance with her family.  (Sounds like a room addition!)

Laws get written when problems emerge and are recognized as such.  With so many portable loos staying long term, it might be worthwhile for government officials to consider questions such as:

When attending festivals and large gatherings, it’s always a relief – so to speak – to find a porta potty, especially if it is clean and not smelly. When they start looking like room additions on every block, and they remain on the street, driveway, or front yard for months at a time, neighbors may start to consider it a blight.

The portable toilet industry has really taken off.  It might be time for our regulations to address situations when they move from being mostly useful to mostly an eyesore.

History of the porta potty

The interesting facts and history of porta-potties

Other names for portable toilets are Porta John and Porta Jane