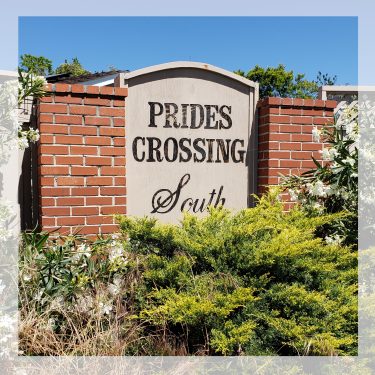 The Prides Crossing neighborhood in the northern part of Saratoga has a lot to boast about: a sense of community, easy access to commuter routes and many amenities, and laid-back California luxury. We’ll go into more detail below, but here is a profile of the neighborhood in bullet points:

Where is Prides Crossing? 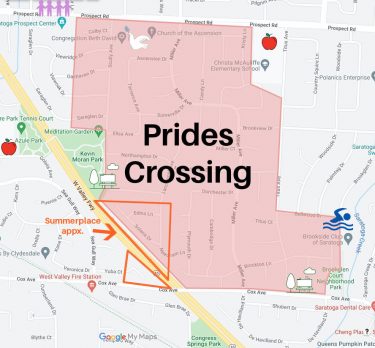 North of 85 near the Campbell and West San Jose borders, boundaries of the neighborhood include Prospect Rd to the north and Cox Ave to the south, with 85 and Saratoga Creek at the southern corners. To the west, Scully Ave and to the east Titus Ave border what makes up the majority of the neighborhood, although they are not exact boundaries (the map paints a better picture). Miller Ave is the main thoroughfare through the community with a brick and brass sign marking it’s entrance at it’s intersection with Cox Ave.

While not technically part of Prides Crossing, I did include a corner of the Summerplace subdivision (built 1973) in the neighborhood map as it might easily be mistaken as such. There are 46 homes in the Summerplace tract (5233), but 37 are only accessible through the Prides Crossing neighborhood, touching the south end of Kevin Moran Park, while the other 9 are on the opposite side of highway 85!

Continue reading below, or explore other areas in our interactive map of neighborhoods in this city. We are slowly adding more! 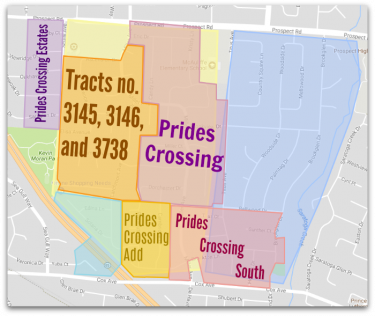 Homes tend to be single- or two-story ranch style. Original designs include Spanish-style homes with courtyard entries and traditional ranch homes with deep eaved porches. Some have a little more midcentury flair with open floorplans and corner fireplaces, and many have vaulted ceilings in the living room. Some homes enjoy 3 car garages and some have pools. 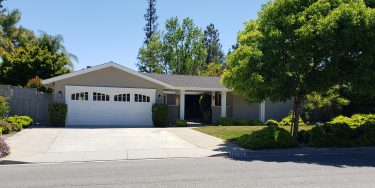 There are a few exceptions in the neighborhood. A smattering of older homes are dotted throughout the neighborhood were built between 1915 and 1960. It’s not too uncommon to spot singular older and even historic homes around Silicon Valley neighborhoods, lingering reminders of the agricultural heritage of the valley. A handful of much younger homes also exist, fully or mostly rebuilt in the 2000s or 2010s, often +3,000 SqFt homes.

The neighborhoods overall curb appeal indicates a strong pride of ownership (no pun intended). While there are no tree-lined streets, mature trees and wide landscaped yards beautify the meandering streets. There is enough uniformity in design (the overall ranch architecture) to not look patchwork, and enough variety to look interesting. Prides Crossing is a very appealing neighborhood. 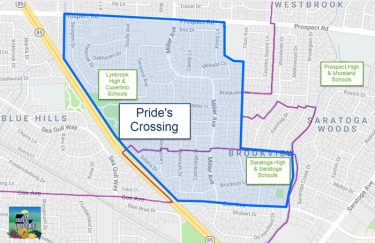 While it is close to the Campbell school borders, that boundary falls within it’s neighbor to the east, the slightly older (built in the 1950s) Brookside community.

Many homes are in the attendance area for Blue Hills Elementary school, just across 85, but still accessible without a car by use of the pedestrian-bicycle overpass which connects Kevin Moran and Azule Parks.

To the north is the Christina McAuliffe K-8, an alternative school described by the district as “A progressive Kindergarten – Grade 8 parent participation, experiential program based on a developmental education philosophy that emphasizes the needs of the whole child.” There is an application process to be considered for attendance.

Kevin Moran Park is the 10+ acre park that borders 85 at the western edge of Prides Crossing was purchased and developed by the city of Saratoga in 2018. It features grassy fields (room for 2 soccer games), a meditation garden, shady wooded knolls with picnic benches, a par course (the full 8 stations traverse Kevin Moran and Azule parks over the pedestrian bridge), a large playground, tennis and bocce ball courts, a loop path, and a half basketball court. A bridge over 85 connects it to Azule Park and Blue Hills Elementary school.

It’s an amazing neighborhood park that deserves it’s own gallery! But keep reading below the images about other amenities in this area. 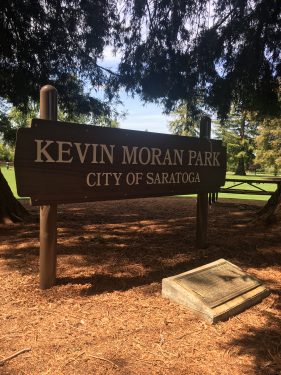 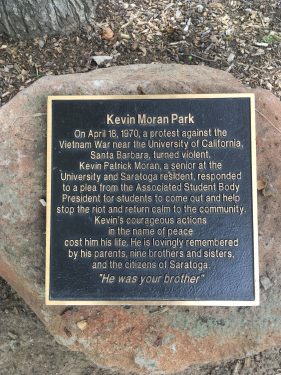 Dedication and Story of Kevin Moran 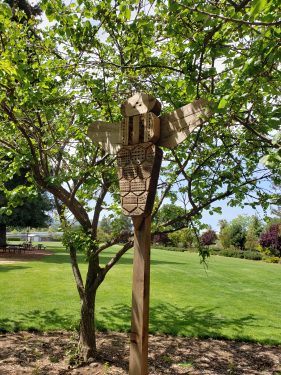 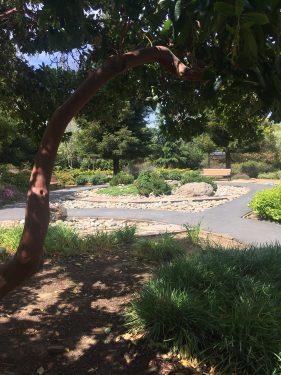 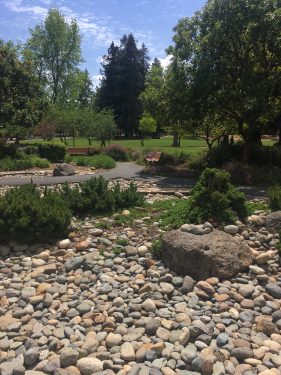 Looking out from the Meditation Garden 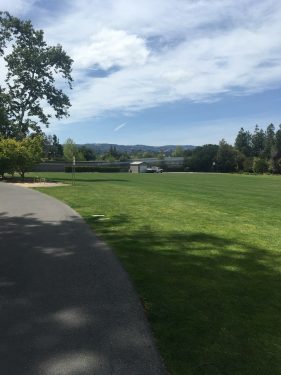 Pedestrian-bicycle overpass and half basketball court 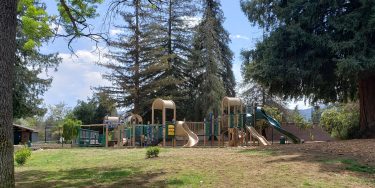 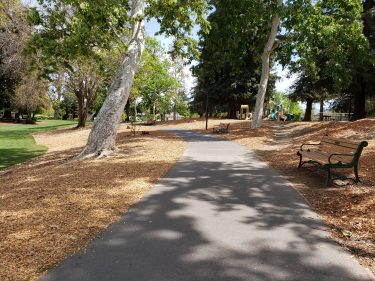 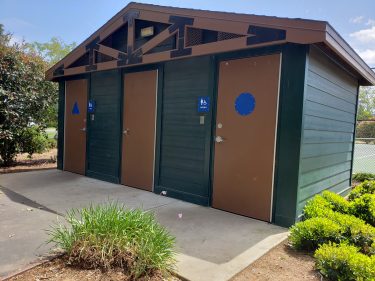 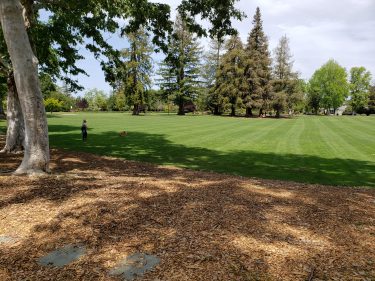 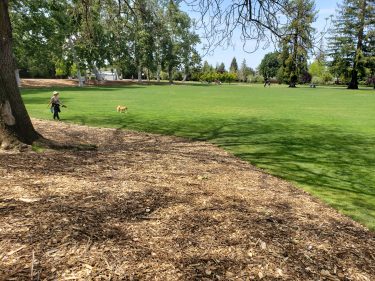 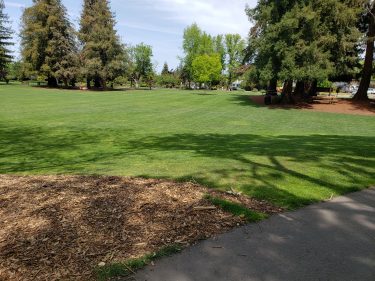 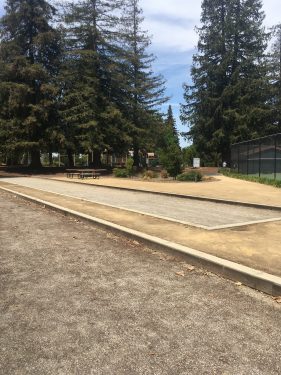 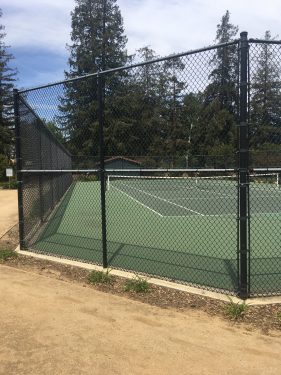 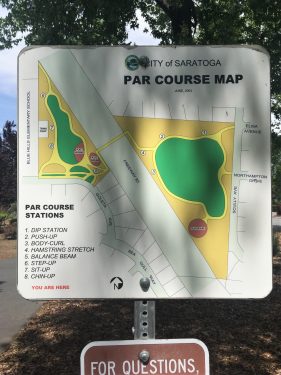 Par course map showing the path between the two parks 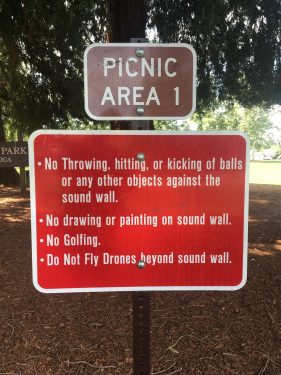 Rules for the sound wall!

And that’s not the only park in Prides Crossing! At the southeast corner is the Brookglen Court Neighborhood Park, a 0.7 acre residential park with a grassy lot, play area, and half basketball court.

It is also home to the Brookside Club of Saratoga. Founded in 1958 this popular member-owned cabana features a pool, 9 tennis courts, playground, and clubhouse with play room. The club has a limited membership of 250 families.

Along Prospect Rd to the northwest the neighborhood is also home to communities of worship: Congregation Beth David, and the Church of the Ascension, and more just a short drive away.

Also to the northwest is the Saratoga Prospect Center, aka the Friendship Hall. The hall is a community center which is host to everything from weddings and birthdays, to regular Jazzercise classes, and more. This site appeared on the city’s “opportunity list” for possible redevelopment as affordable housing to strong opposition from its neighbors. As of February 2022 it does not appear to be on the city’s Housing Element Opportunity Sites list.

The neighborhood is also one of the most commuter-friendly in Saratoga. A short drive will get you onto highway 85 – about a 5 minute drive or less from anywhere in the neighborhood. Quito / Lawrence Expressway are also about half a mile as the bird flies and a short drive away. A VTA bus stops along Prospect, opening up even more commute options.

The Public Library and West Valley College are also within about 10 minutes drive.

What Does It Cost? 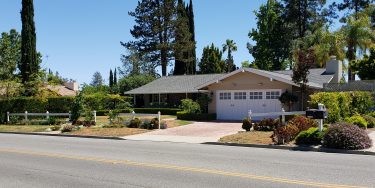 Homes towards the quiet center of Prides Crossing seem to sell for a little higher price per square foot compared to those closer to it’s busier borders and farther from the enjoyment of Kevin Moran Park.

In addition, homes the Los Gatos – Saratoga schools might sell a touch lower than those in Cupertino schools.

What Issues are there, if any?

This community is in the flatland of the valley, and is not in any current state or local responsibility high or very high fire hazard severity zones. Properties that back up to Saratoga Creek are a higher risk of floods and water-related damage, and be affected by wildlife, but flood zones appear to be limited only to these immediate homes.

Homes close to the freeway (such as the Summerplace tract) have increased noise and air pollution. Properties that back to Prospect Rd and Cox Ave will also have similar issues. Some power lines pass through the neighborhood, but no high-voltage wires. There is a PG&E south of Cox and 85, and the high voltage lines that connect to it are on the far side of 85 (Where are the High-Voltage Lines?). 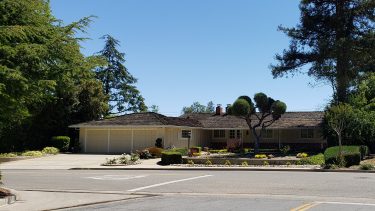 These homes were built during the era of Zinsco / Sylvania and Federal Pacific electrical panels, which are a fire hazard. We recently helped a client purchase a home in the area, and the panels were Zinsco. The replacement isn’t cheap, but it’s a one-time expense that could save your home.

Like most neighborhoods in Saratoga, there are no sidewalks. Many residents enjoy the more rural look of less concrete, but for some it may be a safety concern since traffic and pedestrians all share the same space.

Interested in buying or selling a home in Prides Crossing? We would love to hear from you!

Homes for Sale in Prides Crossing