I recently published a piece on post-tension slabs, which is more used in new construction, however it’s not the most common type across existing homes in the South Bay. While basements are not often found in the South Bay, crawlspaces are. You’re most likely to encounter raised perimeter, also called post and pier, foundations. 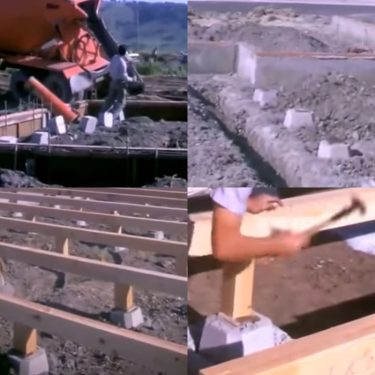 Still images from historic reels shared by History San Jose showing one of the city’s suburban developments of the 1960s and the installation of this type of foundation. Click to go to the original video on Youtube.

What is a Raised Perimeter Foundation?

A raised, perimeter, or raised perimeter foundation is one that supports a structure while lifting it a few feet above the ground level, as the name implies. It is called a perimeter foundation because the exterior walls are held up by a reinforced concrete stem wall, while the body of the house is supported by a post and pier construct. (In earthquake-free parts of the world, the stem wall may be brick or cinder block.)

This type of foundation is usually only raised around 1-1/2’ – 2’ high, one or two stair steps above ground level. Much taller would make a top-heaviness that becomes less stable against seismic force.

Alternatively, some floors might be set quite low. Two rooms in my single-story house are a step below the rest. They are still raised on posts and piers, but they are distinctly lower than the rest. This is called a sleeper floor. In the crawlspace, this translates to very tight quarters, and I have met professionals who will, and who will not, be able to work in that space. 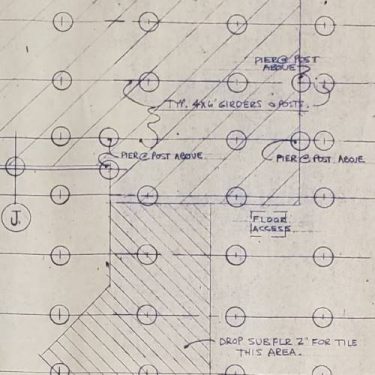 Post and pier, or beam and post foundation, supports a structure by raising it on individual posts distributed evenly beneath a structure. Each pillar of support consists of three parts: the pier, the post, and the beam.

The pier is a vertical anchor set deep in the ground, usually made of concrete (but occasionally other resistant material like steel). The pier rises a few inches above ground level and is attached to a vertical post. The post, or column, is generally foundation-grade treated wood. This post attaches to a horizontal beam, or girder, which directly supports the floor joists. Occasionally, the pier may act as a post and connects directly to the beam, but that is very uncommon in my experience.

Post and pier foundations can be built without the perimeter wall, but functionally it is very different. You will often see decks built this way, including decks that are attached to homes with a raised perimeter foundation. Without the continuous stem wall the cost to construct is significantly less, but the resulting structure is more vulnerable to the forces of nature, to lateral seismic force, and to pests and wildlife. It also has greater airflow beneath, which is good in places with regular flooding, but provides less insulation from below.

Many consider the continuous perimeter foundation to be the best type of foundation to resist seismic force for residential structures. Reinforced concrete stem walls and piers are secured to the ground with a footing and are attached to the structure above. The wide footing distributes the load over a greater surface area.

It is also considered an excellent choice for areas with expansive soils, like we have in the South Bay. And it is a good choice for foundations built on sloping ground. During a flood, raised homes are better protected than slab foundations.

Accessibility beneath the home is an extremely valuable feature of raised foundations. Plumbing and air ducts can be easily worked on from the crawl space. If a pipe leaks it will cause less damage and cost less to repair in the crawlspace than if it leaks in the attic or beneath a concrete slab.

Similarly, foundation repairs are usually much less involved and less costly for raised foundations. Often times, individual piers can be replaced or upgraded with minor inconvenience to the homeowner. For instance, my home had damage to a post, so we chose to replace the wooden post with an adjustable metal jack style post, to even the floor. Sections of stem wall can be treated or repaired with minimal interference in the household as well.

Some people prefer the feel of raised floors, claiming that floors built atop slab foundations are too hard, like the concrete below them. From the crawlspace, insulation can be easily added to improve a chilly floor.

The biggest downside of raised perimeter foundations is the cost to construct. This is a complex construction and it takes time, expertise, and materials to build.

There are vents in the stem wall which allows for airflow, so a raised foundation provides less insulation at ground level than a slab-on-grade foundation does.

Because the foundation is raised, it can become accessible to pests (we had a small animal chew through a vent to travel under the house one night). We have a pest company that checks the attic and crawlspace at the same time about once a quarter (they hardly ever find anything down there).

If water issues are not controlled using appropriate drainage (or a sump pump, if necessary), water can collect under the house in the foundation, which makes the crawlspace inaccessible and can cause mold. Crawl spaces may require regular inspection and possibly maintenance if you are in an area where water accumulates. 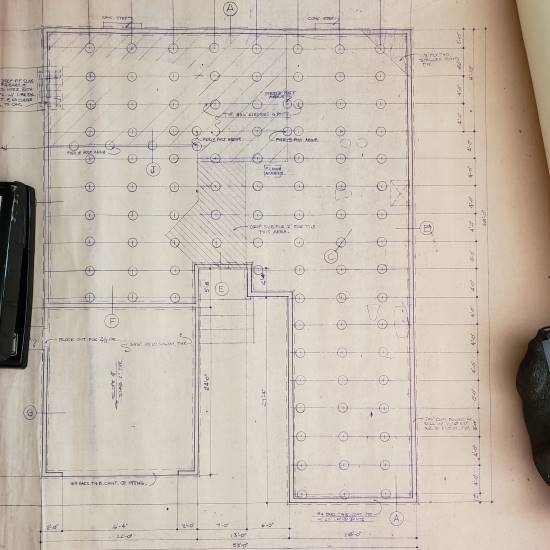 A raised perimeter with post and pier foundation blueprint for a Santa Clara County subdivision from the 1970s.

Over the long run, raised foundations are a good investment. If well built and properly cared for, it is likely to withstand the test of time better than most older slab foundations. That being said, very old raised foundations (such as those from the Victorian era up to the 1950s) come with their own issues, as with any construction of that vintage. A San Diego company, Craftsman Foundation, has a good booklet discussing old raised foundations, including on cripple walls.

In my decades of experience as a Realtor I have learned a lot about residential foundations, but I am no engineer. For serious questions about foundations or earthquake safety for a construction project or repairs please consult a foundation professional. I would love to hear from you if you’re interested in working with me to buy or sell your home!