Many of the statistics quoted by news agencies and real estate information analysts refer to the “active” inventory as not just the homes which are truly available, but also those which are sale pending but with contingencies still in place (whether huge contingencies, such as bank approval on a short sale or the normal ones, such as property inspection and loan approval).  This often results in a more bloated look at what’s available than what is really the case, and it gives buyers the sense that it’s easier to purchase than it truly is. Let’s look at some statistics to see what’s happening over the last year, when it shifted from being a buyer’s market to a severe seller’s market for houses in Santa Clara County.

Normally there are more homes available (for sale, without a “sale pending” status attached) than there are closed sales each month.  But right now, the available properties are being gobbled up much faster than new ones are getting put onto the multiple listing.  Let’s view the graph to see the relationship between these two figures for houses listed and sold in Santa Clara County in 2012. 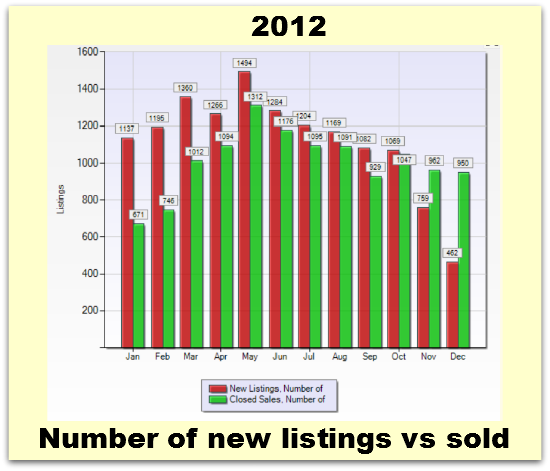 At the beginning of 2012, please note that the new listings (the red line) outpaced the sold and closed properties (green line).   The delta between them shrinks over the course of the year, until in the fall they are nearly equal until closed sales far outstrip new listings.   That is a complete flip in the market, and it represents a shift in power from the buyer to the seller, too.  For those who prefer just the numbers, here they are: 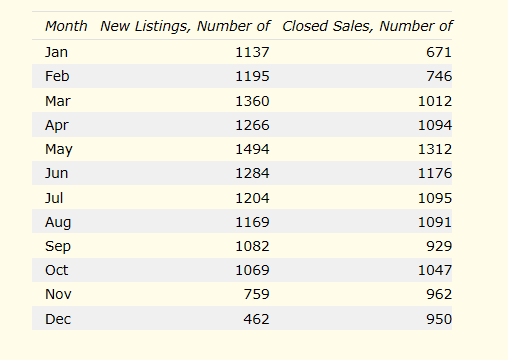 Spot checking the various areas in Silicon Valley, the trend is pretty consistent throughout the region.  Here are the numbers for Saratoga:

Here they are for neighboring Cupertino:

October again was a near even month for Cupertino, and after that, the situation became dire as new listings in December dropped to a pittance.

Los Gatos and many other areas are similar too – the market moved from having restricted inventory to new inventory not at all keeping up with sales in about October of 2012.  It was about 6 months prior to this that we saw a real change in the market, but it was evidenced throughout the region with these kinds of figures a half a year later.  What we see “in the trenches” sometimes isn’t widely reported for awhile, and provable for awhile after that as a new trend in the local real estate market.

Today in Santa Clara County, there are a mere 674 houses for sale which are not under contract (not sale pending).  There are 373 which are under contract with a release clause (of those, 303 are short sales), 240 pending with just the normal contingencies for loan and inspection, 671 pending with all contingencies removed (so considered “sure to close” by the listing agent and seller) and 521 houses in the county have sold and closed escrow in the last 30 days.  What’s the absorption rate?  Some analysts will include homes under contract but without contingencies removed as part of the available inventory.  I don’t find that accurate because most pending sales do close today, at least if they are “regular sales” and not distressed or short sales.  But we’ll look at it both ways.

If you only include the truly available properties, those without a contract on them already, you take 674 and divide it by 521 = 1.2 months of inventory, or about twice as hard to purchase a house in Santa Clara County as may be widely reported.

Finally, even in a crazy seller’s market like this, not every home sells.  In the last 30 days, 193 houses in Santa Clara County either expired or were cancelled.  Certainly some, perhaps many, are back on the market either with a new price, new agent, or both. But not all.  Sellers, be careful not to over estimate the market.  Buyers, there are homes which do not sell immediately – those make a good target for your home buying efforts!