What will 2020 bring to the local housing market? I have a few Silicon Valley real estate market predictions to share for this new year. They are based on what I’m seeing now and the patterns I’ve learned to identify in my career working with buyers and sellers in the South Bay.

For today, I want to focus on Santa Clara County in particular (home to San Jose for those reading this from afar). While San Mateo County is also part of Silicon Valley, there are fewer than half as many sales there each month (often about 40% as many).

Supply – inventory of available listings on the market

The starting point for predictions is understanding where we are now as much as possible. That begins with inventory patterns. We have had ultra low inventory for years, but even since 2013 there have been ups and downs.

Most of the time, inventory hits a low point in December or January of each year, then it shoots up between January or February to sometime in late spring. Sometimes it extends further.  Often, inventory is highest in summer, but sales don’t keep pace, and consequently prices tend to level off or even fall during summer and later in the years. These aren’t absolutes, but they are trends we see in many years.

Below please find a graph indicating the inventory or supply of houses / single family homes for sale in Santa Clara County dating back to January 2003.

I like this kind of graph because visually, we can see the annually repeating low points, but also, we can identify when the  oversupply  kicked in – the number of homes on the market ballooned during the downturn! After that, inventory began to shrink, and aside from the fairly normal mostly seasonal patterns, has been on a decline ever since.  (The second half of 2017 and first half of 2018 were an aberration.) 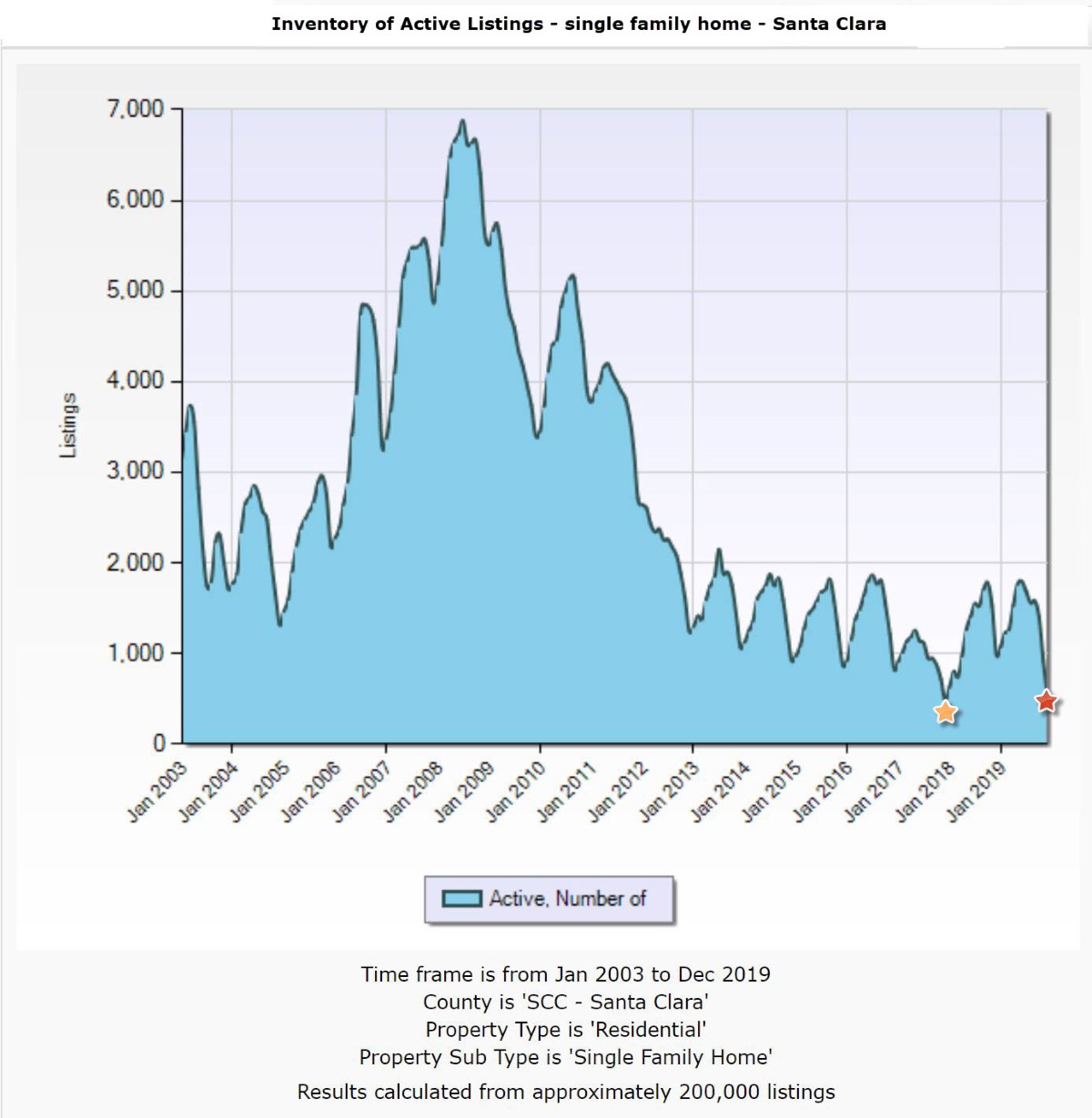 December 2017 is starred – it is the lowest inventory of any month in those years with a mere 487 houses for sale – and we know what happened during that period, prices shot up to a new high point by May 2018.

Also the very end of the graph is starred, reflecting today’s inventory, which is even lower than December 2017 at just 421 houses on the market. Caveat, though: I believe the MLS pulls its inventory figures from the last day of the month, so comparing January 2nd may not be fair! We’ll have to see where we are on the 31st. Even so, it’s alarmingly low when you consider that this county holds about 1.9 million people. So when we view the numbers month over month, we’ll focus on December to make sure we’re comparing apples to apples.

Next please find the same information but presented as figures or a data table. I’ve highlighted all Decembers to make it easier to compare. Please note the high inventory levels between 2006 and 2010, the heart of the downturn. And please also see the difference between December 2009 (3406) and December 2019 (502)! What a difference a decade makes! 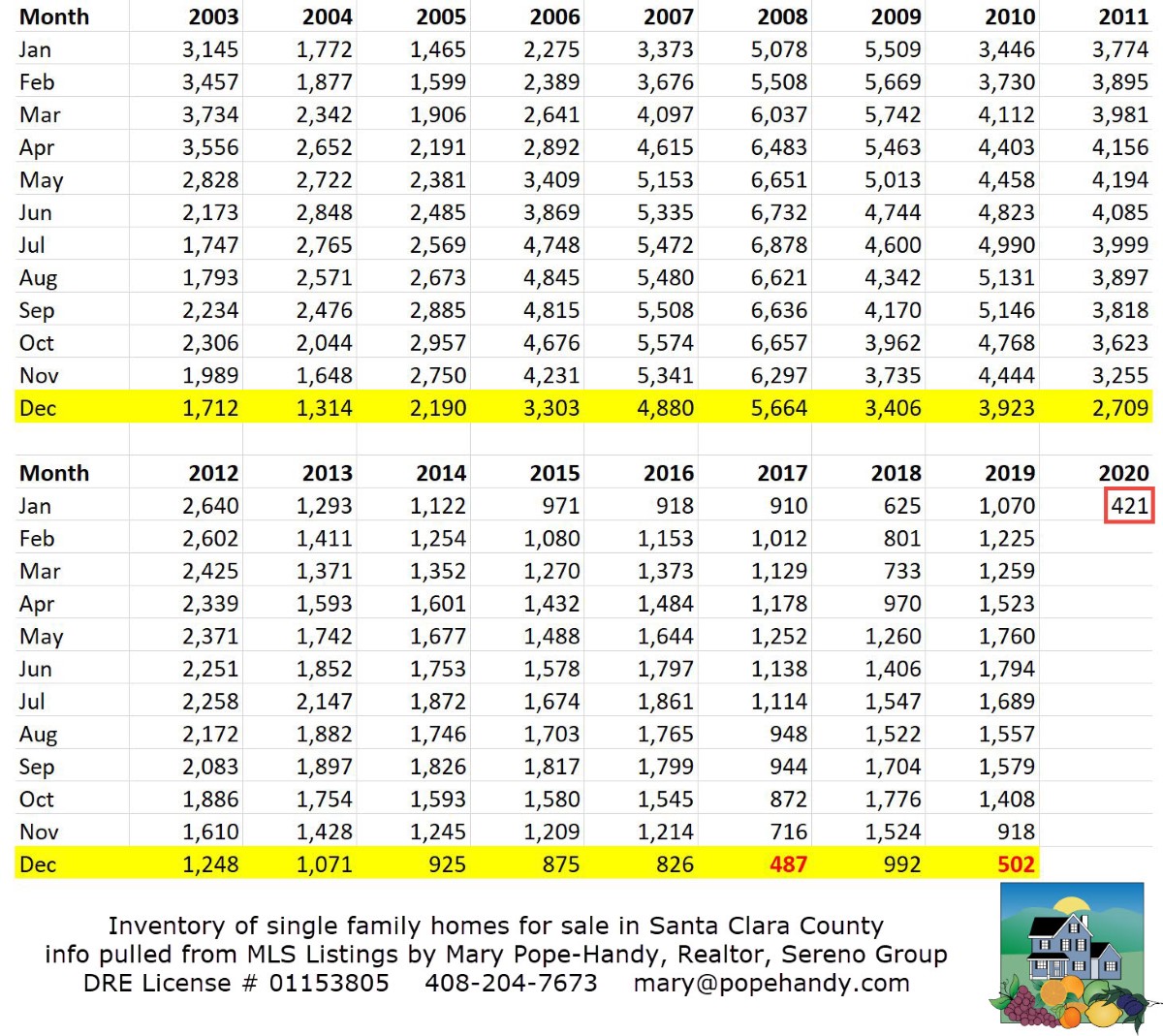 What we know is this: very low inventory sets the stage for multiple offers and overbids, which in turn leads to appreciation.

But how fast are home buyers buying in Silicon Valley? The months of inventory makes it plain.

The months of inventory (MOI), also known as the absorption rate, tells us how fast all available listings would be purchased if home buying were to continue at the same rate, and no new listings were to come on the market.

The smaller the MOI, the hotter the market & the easier it is to sell a home / harder it is to purchase a home.

To get a little historical perspective, let’s again view the available real estate absorption rate data going back to 2003. 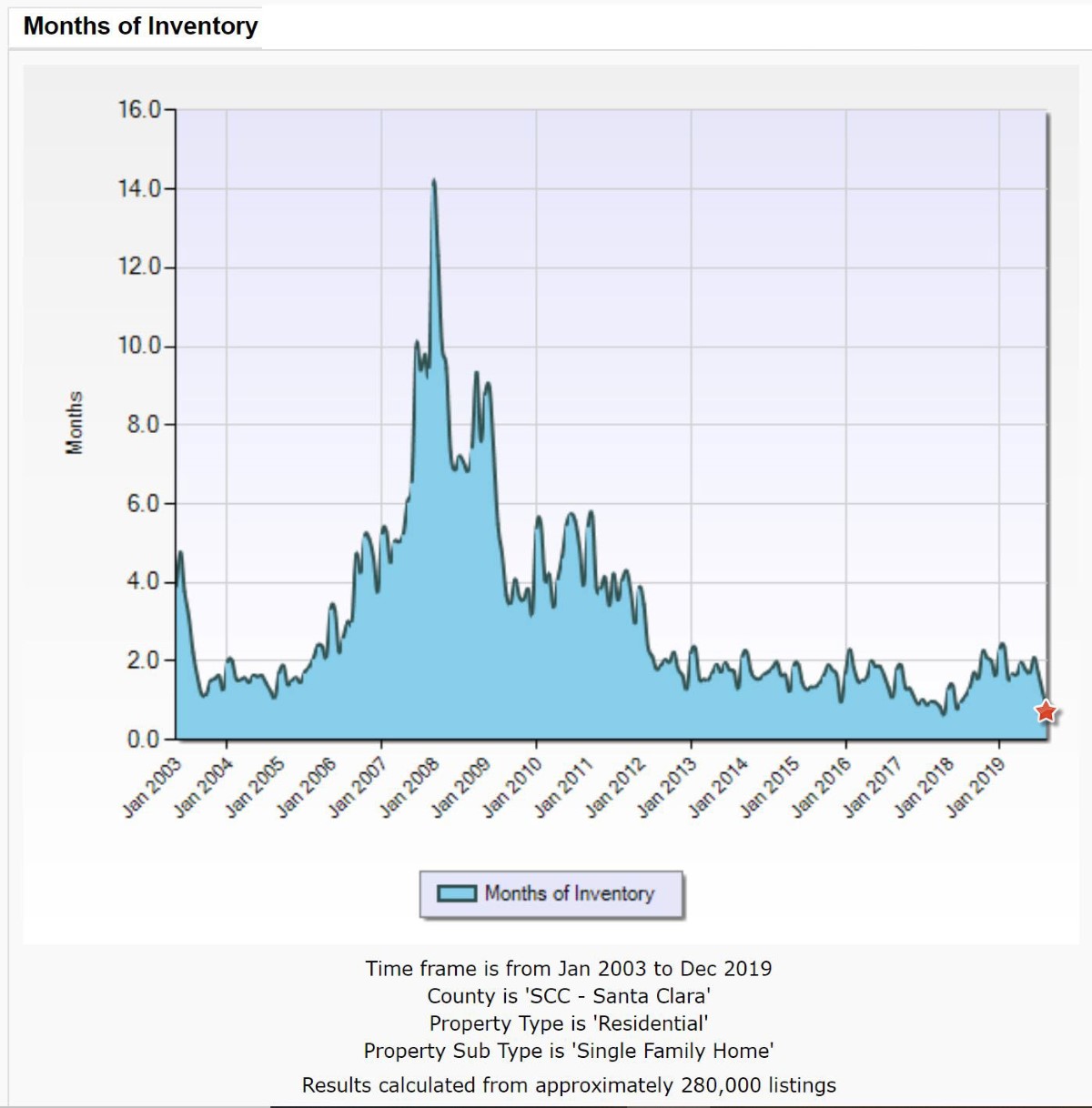 Once again, the years of the downturn or Great Recession are immediately obvious by the bloated months of inventory beginning in about 2006 and not really ceasing until around 2013 – but the worst was 2007 – 2012. If you tried to sell a home then, particularly in 2008, you were likely in a world of hurt.

Aside from those very rough years, you can see that most of the time, the absorption rate is fairly tight at under 2 months. That’s quick and would be enviable in most parts of the U.S. The red star at the end displays today’s data, which will be provided in a table next.

Below is a table – same info as in the graph above displaying the months of inventory. 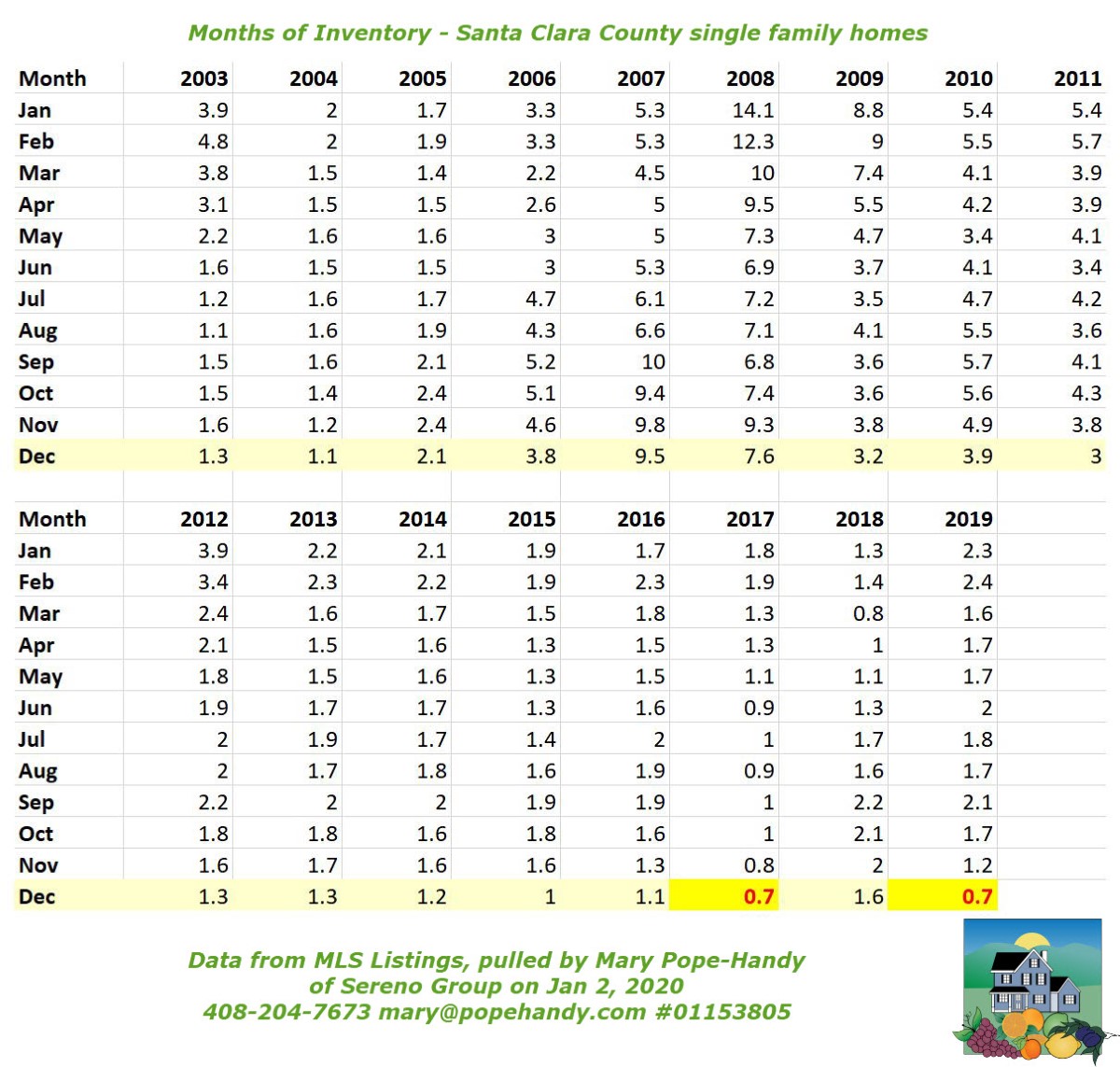 This chart is quite revealing. As of December 2019, Santa Clara County’s single family home real estate market had the fastest absorption rate experienced at any time in the last 17 years, and it is in a perfect tie with December 2017.  This underscores that buyers were buying homes as fast as they were coming on the market – no time to breathe! It’s one thing if supply declines and so does demand. But here it’s clear that demand did not die, but in fact increased as compared to November (both for 2017 and 2019).

Given that December 2019 looks a lot like December 2017 in terms of market conditions, I have no reason to believe that January – March 2020 won’t look a lot like Jan – March 2018 and perhaps a few months more than that to boot.

What about interest rates?

Loans are a product one buys and it’s a huge part of the home buying formula for most of us. We tend to say “I got a loan”, but it’s something you select and purchase, and something you’ll pay for over years.  The people and companies which sell loans, like everyone in real estate sales, feel the pinch when the housing market has only a few closings each month. With fewer listings, there are fewer sales, meaning fewer dollars flowing to banks, lenders, loan officers (and yes, Realtors).

Back to supply and demand, if there’s less demand for loans due to low numbers of sales, it puts downward pressure on loan pricing. If that continues to be the case in 2020, we should see interest rates fall further. I have seen some articles suggesting that interest rates will be in the mid to high 2s in 2020. Others, such as Bankrate, predict that rates will be flat in 2020. I have not seen any assertions that rates will rise.

For buyers worried about higher prices due to strong demand and tight inventory, I would say this: please do the math. If you are financing your purchase with an 80% loan to value loan, and interest rates dip under 3%, you may be better off than you expect. If you are worried about buying now and then having rates drop, I would say to seriously consider moving ahead while the home prices are lower, and if rates drop, refinance (though refi rates are always a little more than purchase money rates). Ask your lender if you can refi within a year or two if rates go down. Some banks have a program that anticipate this.

What about the second half of 2020? No idea. The market often softens during a presidential election year, but it doesn’t have to do so.

We are the top of a long real estate expansion, it seems, but for right now I don’t see a major correction in sight. Our cycles tend to be 7 to 10 years, and we aren’t yet at 10. Can it go past that? Anything’s possible, if unlikely. (Look at Australia’s crazy long expansion.)