Although most of the time, a home seller’s main concern is with getting the highest price (or net), that’s usually not the only concern – and sometimes it’s not even the most important one.  Selling one’s house, townhome or condo is highly personal and not just a business decision.  The relationship with the buyer and their agent is extremely important. It can literally make or break the deal!

So let’s talk about the things which can help or hurt the relationship between the buyer and the seller. 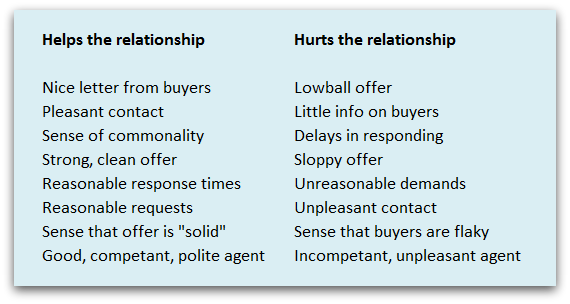 With multiple offer situations, many home buyers in Silicon Valley know that it’s in their best interest to write a nice letter, perhaps with a photo, discussing why they love this property.  A lot of garbage clauses go out the window when there are multiples.  But now, in the San Jose area we are seeing a return to normalcy and many bids are not multiple offer situations.  Some buyers think that it’s no longer necessary to try so hard.    I’d advise against acting on this impulse, because the little things, or lack of them, can cause a transaction to succeed or fail.

In recent weeks I’ve seen home buyers shoot undermine their own best interests by dragging their feet on negotiation response times, asking for unreasonable things in the purchase offer, or having a buyer’s agent who appeared incompetent.  Think of the offer process as a courtship and ratifying the sale as a marriage.  If the courtship is rocky, why would the marriage be any more promising?  The market remains a seller’s market, if a calmer one, but home owners don’t want to be mistreated.

The old adage that “you only get one chance to make a first impression” is still true with real estate contracts and negotiations.  If you don’t present yourself well, with your Realtor’s help, then the seller is not going to want to sign an agreement that ties them to you for the next month or two.  And he or she certainly won’t want to see you in their beloved home.