What sells? An infographic from the National Association of Realtors

The infographic below is from my trade organization, the National Association of Realtors.  The statistics are, naturally, national.  What I tell my home buyers is that it’s imperative to look for something with “enduring value” like a short commute, good schools, or both.  But enjoying a nice view or attractive architecture is also enduring.  Check out the national trends.  Do any of these surprise you? 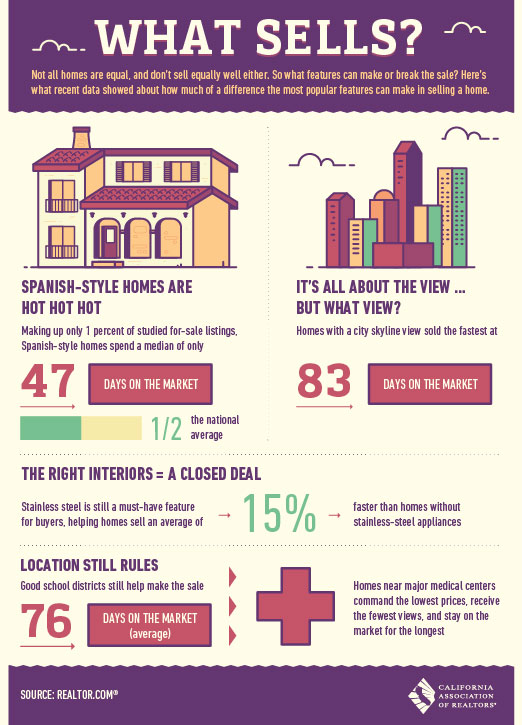 Each fall, the Realtor community gets alerted by our Realtor associations about upcoming laws that take effect in the new year.  Recently the Silicon Valley Association of Realtors (SILVAR), of which I am a member, provided us with a list of upcoming changes in the law.

Perhaps the most striking one involves the secrecy of the sale price of real estate sold in California.  It used to be possible to withhold the sales price of a home not just on the multiple listing service (MLS) but on the county records as well.  This was done by putting the transfer tax amount on a separate document, not together with the recorded deed. (However, the truly determined could still learn the sales price via a California Public Records Act request.)  By doing a little math, it was possible to obtain the sale price via the amount of transfer tax paid.

No more.   The documentary transfer tax (DTT) must also be visible as of the new year because of the passage of Assembly Bill No. 1888 (“AB 1888”).  The California Association of Realtors supported this measure “because it increases accessible information about closed sales and transparency in public records.”

What’s most important to home sellers: highest price, fast close, all cash, no contingencies, pre-approved loan or what?

When home sellers receive multiple offers on their property, they get to prioritize what they want most. Is it all cash, the highest price, the fastest close of escrow, or no contingencies? This 45 second video of home sales in 2013 may surprise you!  (Per the California Association of Realtors – so apparently home sales in CA.) When writing your real estate contract, it’s good to keep this info in mind – too often, cash buyers in particular don’t appreciate that most sellers are after the #1 item listed in this quick video.

One of the happiest places in the U.S.: the San Jose, Sunnyvale, Santa Clara metro area – Silicon Valley!

MSN real estate tends to feature real estate news in bite-sized slide shares with images (and links for home buyers to search properties listed for sale on Realtor.com). A new study, more complicated and comprehensive than would normally be published for consumers to digest,was summarized there from Gallup and Healthways Well-Being Index, known as The American State of Well Being study, a poll of 178,000 people in 2013 across the country.  The distilled info is broken down by state, metro area or city and also by congressional district.  San Jose – Sunnyvale – Santa Clara (the metro area in Santa Clara County, what we would call Silicon Valley) came in quite strong!   MSN picked it up, condensed the info and provided a list displaying a sample of homes for sale in the  10 happiest cities in the U.S., which you can read online here.

Not surprisingly for residents of The Golden State, California landed three of the ten spots.  Cites or areas named as where people are the happiest ones in the United States are:

Silicon Valley, Santa Clara County and the San Jose area still are “The Valley of Heart’s Delight“, at least that’s how it seems when the locals are polled!

Because the San Jose – Sunnyvale – Santa Clara area is a “metro” area, it would seem to include these nearby towns and cities:  Los Altos, Palo Alto, Los Gatos, Monte Sereno, Saratoga, Cupertino, Mountain View, Campbell, Los Altos Hills and other parts of Santa Clara County.  Congrats to the whole South Bay region!

To learn more about this study and its results, please click on the Gallup-Healthways link above.

Here are the headlines from the San Jose Mercury News in mid April 2014:

Excerpt:  Bay Area apartment rents are rising at nearly double-digit annual rates and have reached record levels, according to a report released Tuesday, prompting some analysts to warn that the region’s economic boom could be choked off by the relentless rise…..  Among the Bay Area’s three largest cities, San Jose had an average asking rent of $2,066 during this year’s January-March quarter, up 10.3 percent from the same period last year, RealFacts reported. Oakland had an average rental rate of $2,187, up 12.3 percent, while San Francisco posted an average of $3,057, up 9.5 percent.

Excerpt:  March marked more than 20 consecutive months of year-over-year price gains for single-family homes in the East Bay, South Bay and Peninsula, according to real estate information service DataQuick, which released a report on March sales Wednesday…. The San Diego-based company said that prices were up 29.2 percent from the previous March in Alameda County to $575,000. In Contra Costa County, prices rose 22.8 percent to $425,000. Santa Clara County gained 20.3 percent to $800,000, and San Mateo County was up 13.2 percent to $860,000.

Whether you buy or rent, prices have been rising dramatically.  When factoring in what housing will cost, include the trajectory of appreciation per month. 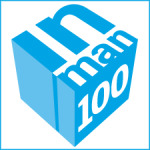 Each year, Inman News sponsors a “people’s choice” voting for the most influential person in real estate.  Inman nominates 100 strong candidates but voters may also write in someone not listed.  This week, I was very deeply honored to have been included on such a prestigious list of real estate leaders nationwide, and I’d be thrilled if you would consider voting for me.

Where to vote:  follow this link and the fields for entering your desired winner’s name and info will be about 20% of the way down (midway through the article and just after a large ad) – deadline is Dec 1, 2011:

END_OF_DOCUMENT_TOKEN_TO_BE_REPLACED

Each year, RelocateAmerica.com puts out a series of lists of “best places to live” for various categories.  Santa Cruz made the grade for the Top Ten Recreation Cities.

This is no surprise to me (or probably to most of us who’ve lived in Santa Clara County for any length of time) that Santa Cruz is almost like a big playground.  We know it for the wharf, the beaches, the boardwalk, for kiting, biking, surfing, sunning, sailing, fishing, photography, loads of other sports and more. There’s no shortage of music or shopping, and in summer there’s a Shakespeare festival too.  Recreation? You bet.

In life before real estate, Jim & I lived in Santa Cruz for three years.  During that time he was working in Salinas all three years and I taught at Marello Prep (now a closed school) for one year, then two more at Notre Dame High School in Salinas.  The year I was at Marello was eye-opening.  Even though I’d spent a lot of time in Santa Cruz as a kid (mostly because my grandparents lived at Pasatiempo), it was a different thing to be teaching in a school perched on the cliffs of the west side and enjoying a view of the Monterey Bay and the Boardwalk.  Several times before class would start, someone – usually a student but sometimes a teacher – would check the waves from my classroom windows and hollar “surf’s up!”   At that point it would be harder to keep their attention…..

The California Association of Realtors today announced to its members a no-cost mortgage protection program that first time home buyers in Silicon Valley will want to know about!  The new program will give peace of mind to first time homebuyers who are worried about buying a condo or house now in case they are laid off later.

The notice we received today stated:

Through the C.A.R. Housing Affordability Fund Mortgage Protection Program (C.A.R.H.A.F. MPP), first-time home buyers who lose their jobs due to layoffs may be eligible to receive up to $1,500 per month for up to six months to help make their mortgage payments. A qualified co-buyer also can participate in the program, for a reduced monthly benefit of $750 per month for up to six months in the event of a job loss. Program benefits also include coverage for accidental disability and a $10,000 death benefit. C.A.R.’s Housing Affordability Fund is dedicating $1 million to the program this year, and estimates that as many as 3,000 families will benefit from the program throughout 2009.

We’ll be learning more about this program as details unfold.  This is not an unlimited fund, so if you are interested in buying a home with this free mortgage protection program backing you up, you might want to act sooner rather than later!