San Jose’s Rose Garden neighborhood (part of the 95126 zip code) includes a treasure of a place: the Rosicrucian Egyptian Museum. Located at the corner of Park and Naglee Avenues, it’s a quick trip from the San Jose airport, Santa Clara University, and downtown San Jose in the heart of Silicon Valley.

Oddly, it has its own unique zip code, which can be confusing if you have a sense of what belongs where in Silicon Valley. Surrounded by the central San Jose zip of 95126, for some reason, this block of land has its own distinct zip code: 95191. Don’t let it fool you – it’s still part of the Rose Garden district.

As a child who attended St. Leo’s Elementary School  just up the road off Race Street, it seemed that we would visit this museum annually. What struck me when I was young were the replica of a tomb and the mummies.  Later it was the jewelry and amulets.  Each time, something different stood out – and that is true for me today, also.

Enjoying the outdoors or doing a local museum day

The grounds seem much nicer today than they were in the 60s and 70s; my sense is that it’s always improving.  One of many nice features on this campus is the peace garden – open to the public and a very pleasant place in which to spend a little time. There’s a game to be played, fountains to view and walkways to wander.

In fact, if you were to want to spend even more time out doors, it would be very worthwhile to see also the San Jose Municipal Rose Garden – just a few blocks away on Naglee Avenue .  (A Starbucks at Naglee and Park, just across the street, offers food and beverages should you find that you stayed out too long.)  Want to make it an all museum day? About 1-2 miles up the road is the De Sassait Museum on the campus of Santa Clara University – and it’s free! Or a couple of miles in the opposite direction and you can take in the San Jose Museum of Art.

The few mummies on display were always a highlight – both intriguing and disgusting.  The museum includes human and animal mummies.  Today I see them and think that they really ought to be returned to their ancestral lands for burial rather than stand out as an artifact to be viewed in a museum. (I am not sure why the forces that be in Egypt don’t make a compelling case for their return.) 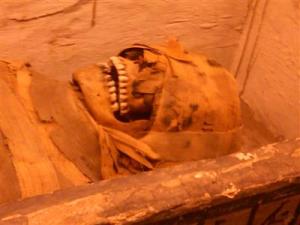 This museum is not for the under age 5 set, but it is great for kids in grade school and older.  Just last week I took my 21 year old daughter there again, as she’s taking a class on ancient Egypt in college and wanted to revisit the museum where she’d been several times before.