Home values in Santa Clara County, the heart of Silicon Valley, have been going through the roof ever since Google announced that it was going to expand into downtown San Jose. Communities like Cambrian, Willow Glen, Blossom Valley, and Santa Teresa were seeing values rise at a good clip prior to the announcement. But since Google essentially put the golden shovel into the ground – in theory – the prices turned straight up, like a geyser. Santa Clara County appreciation has perhaps never been stronger than it is right now.

Realtor Property Network, or RPR, is a tool available to those of us who are dues paying members of the National Association of Realtors. Tonight I was looking at the data for a few communities within Santa Clara County, and was amazed at the appreciation over just the last month in some of them. Here’s what I found: 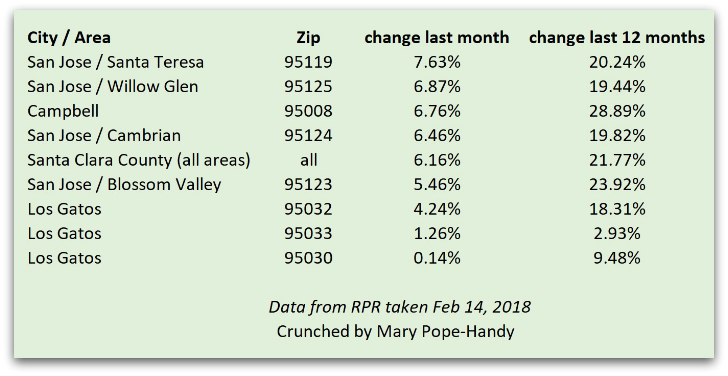 The more expensive areas, such as Los Gatos, are appreciating nicely – but not at the same rate as the more affordable areas like Blossom Valley and Santa Teresa (both districts within the sprawling city of San Jose).Santa Clara County Appreciation as whole has risen 21.77% since a year ago.

What does that mean?

In terms of dollars and sense, it can mean seeing your whole down payment disappear. Those who have cautiously waited on the sidelines have seen the value of their buying power shrink while they studied the market and looked for a good deal.

While I was mid way through my research, the RPR site went off for scheduled maintenance. I was going to check Saratoga and Cupertino next to see if my theory holds true that this rising tide (i.e., Google) is mostly floating the boats in the most affordable areas. That will have to be continued.

At my office meeting yesterday, I heard many real estate agents tell tales of woe for their buyers, who were going up against 20 to 30 or 40 other competing offers – or more!

It is, indeed, a challenging time for home buyers. For home sellers, it’s a dream – as long as they don’t also have to buy here in Santa Clara County or anywhere else in Silicon Valley.

Interested in buying or selling in Santa Clara County, or nearby? Please give me a call and we can schedule a time for a confidential consultation.