The Saratoga real estate market for condominiums and townhouses has recently improved. A year ago, it was very difficult to sell at all, but today homes are moving.  Prices have not rebounded, though, and are still down significantly from the peak of late 2006 to early 2007.  We are seeing a very slight uptick in prices, now, though. The majority of action is happening in the most affordable price levels, which is not unlike the rest of Silicon Valley.

This is a good ratio of listings to pendings for sellers, though with 2 of them being short sales, they may take a very long time to close – or perhaps not close escrow at all.
Inventory has shrunk from last year,  so the market has finally improved for sellers.   (The following charts were created by me using my Altos Research subscription tools. This data uses list prices of homes rather than sold prices (where pricing is referenced). 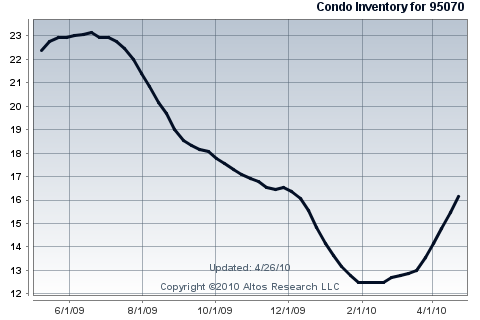 It is not atypical for inventory to rise in spring and continue to do so until summer.

How long does it take a condo or townhouse in Saratoga to sell? What’s the average “days on market” of the homes that do sell? 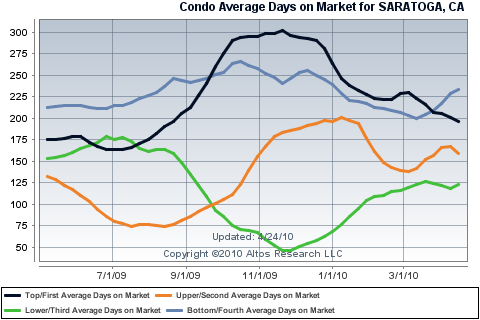 Here you can see the average Days on Market (DOM) for all 4 price quartiles of condos & townhomes in Saratoga over the last year.    Since there are usually very few Saratoga condominiums for sale at any given time, it doesn’t take much to make the charts fluctuate a lot. Even so, you can see that many homes have been on the market 4 months or more.  I just checked MLSListings.com and as of right now, the average DOM for all Saratoga condo or townhouse homes for sale is 116.
How long does it take to sell a condo or townhome in Saratoga right now? Of the six pendings, one took over a year and the other five all sold within about three weeks (the average of the five which sold in less than a year is 16 days).  The good news is that if your home’s going to sell, and it’s price right etc., it should sell fairly quickly. (Also have a look at my RE Report for Saratoga condos and townhouses, which is updated each month.)

What about prices? If you grouped all townhouses and condos for sale in Saratoga over the last year, here’s how the median list price would look: 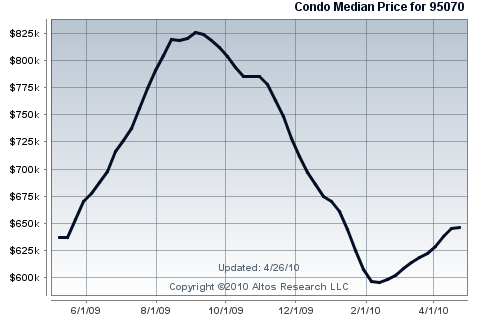 Saratoga, California, median list price of condominiums for sale over the last year

We know that there’s a good amount of variation from one part of Saratoga to the next as well as from small condos to large townhomes.  So now let’s see how this data looks when we break it down into four price quartiles. 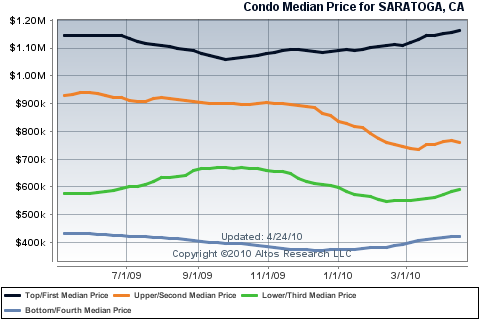 Median list price of Saratoga, CA, condominiums and townhouses for sale over the last year, by price quartile.

As you can see, there’s been some up and down but for several price points, it doesn’t look like a huge change year over year for the bottom half (though a lot of change in between).  These fluctuations look a bit mild because of how broad the chart is.  If we look just at one of the quartiles alone, it’s much more apparent what’s happening. Let’s look at the group representing the third quartile (upper middle or orange line), which is the one that appears to have fared the worst over the last year. 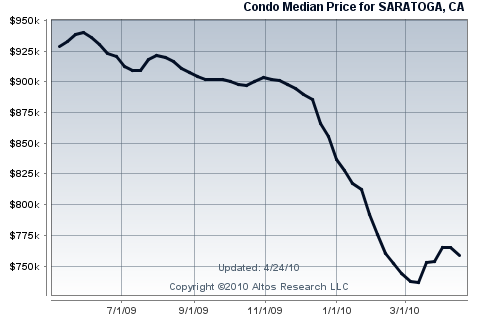 Detailed look at the median list price of the third price quartile of Saratoga CA condos for sale over the last year.

The median list prices of homes of the appx $900,000 type townhome or condo have fallen substantially in the last year with a slight upward movement just recently.

The list price to sold price ratio has also recently ticked upward and is currently at about 100% (it was about 99% a year ago).  If this remains the case, it will seem that it’s truly a seller’s market for Saratoga condos.

That doesn’t mean that prices are back to peak levels.  It only means that sellers have now come to grips with the new pricing reality and are having their homes marketed at prices where buyers will buy.   Sales prices are still down substantially from the peak, but the worst seems to be over.

If you are a buyer who’d like to purchase a condominium or townhouse in Saratoga, now’s a good time to get into the market.  It looks as though prices have bottomed out and are starting to rise.

If you’re a seller who wants to sell, now is the best opportunity we’ve seen in a couple of years.  Your home needs to be priced realistically (what the market will bear, not what it used to be worth or what you’d like it to be worth) but the good news is that homes are selling again.

Please contact me for a no obligation meeting to chat about your home buying or home selling needs.