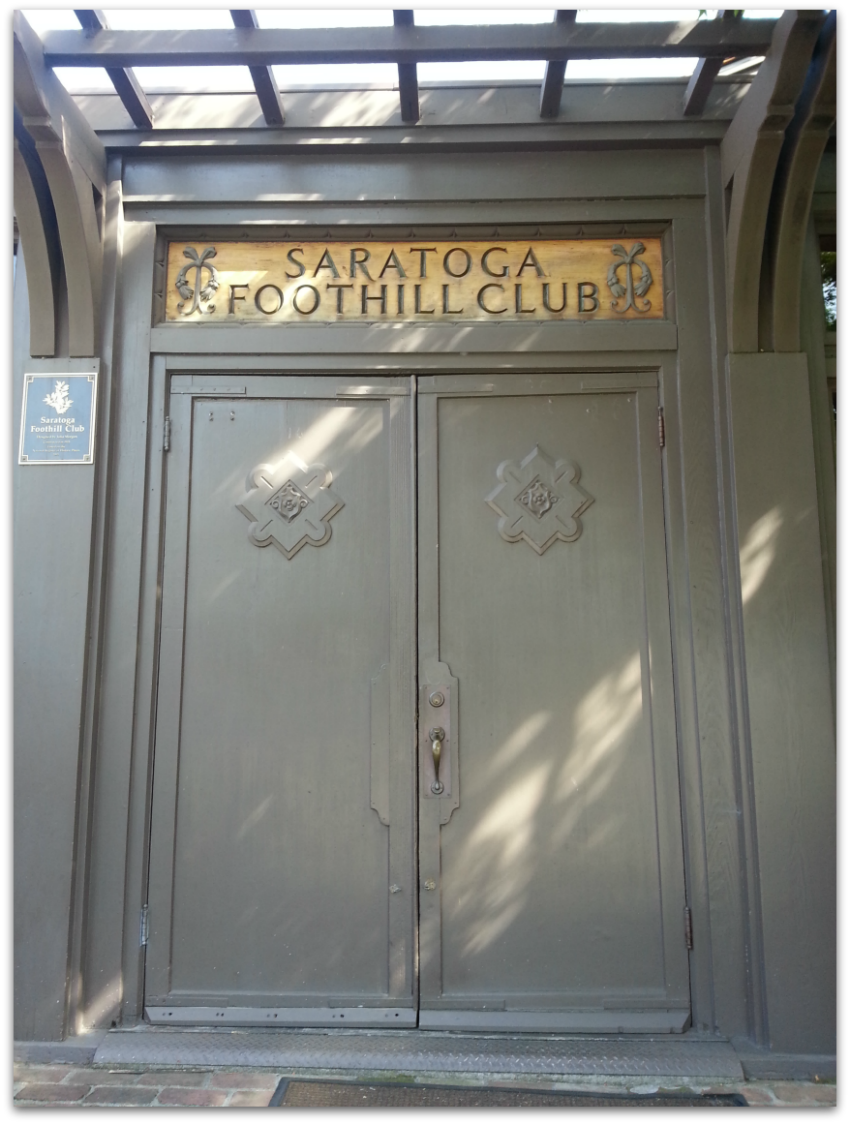 The Saratoga Foothill Club, designed by Julia Morgan, is a Silicon Valley architectural landmark. It is located in a residential neighborhood near the Big Basin Rd and Sunnyvale-Saratoga Rd intersection, a block away from the downtown area. If you’ve never been, it’s worth a trip!  Go for a couple of hours and enjoy lunch in downtown Saratoga Village, too.

http://www.foothillclub.org/    (disclaimer: events listed on this page are from 2014 and earlier)
http://www.saratogafoothillclub.com/
National Register of Historic Places – Registration Form

History of the Club

I’ll post a very detailed history below.  Generally, though, this club was part of a trend of women getting involved in their communities to both improve the places where they lived but also to improve their influence.  This took place before women were permitted to vote and can be seen as part of the broader, growing civic influence of women.

The Building and Grounds

Today what may be more compelling than the movement behind the building is perhaps the building itself. Fittingly, it was designed by the most prominent female architect in California, Julia Morgan, an graduate of the University of California (Berkeley – it was the only UC at the time) and the prestigious Ecole des Beaux Art in Paris.  She was a sorority sister with Grace Fisher Richards, one of the founding members and the then-current president of the Club.  She was also the first licensed female architect in the state. (She is best known for her gorgeous work at Hearst Castle.)  This certainly was not lost on the women who hired her!  Nor on many other clients – “Of the 480 Morgan projects listed in Boutelle’s Julia Morgan Architect, 1995, from 1896 to 1946, more than one third were for women clients or for women’s organizations…. Even more impressive is the fact that Morgan also hired-women professionals. By 1927, six of her fourteen employees were women, a remarkable number for an established business.” (Per the register)***

The Saratoga Foothill Club was built out of redwood (outside and in, though the floors are hardwood) with a wood shake roof in the Craftsman or Arts and Crafts style in 1915.  As with many of her designs, it is simple, understated, and made ample use of natural materials.  Julia Morgan was inspired by the local Bay Area School of design.  The bungalow feel fits in nicely with the neighborhood.

The structure itself is a one story building that’s 74′ wide across the front and 60′ deep, plus some pop-out areas around the sides. Inside there’s redwood paneling (redwood is a soft wood), hardwood floors in most of the area (carpeting in the entry).  The kitchen has sheet vinyl and paster walls – more practical. In addition to the kitchen there’s a main room measuring 33’9” x 40’3 and a dining room with an open fireplace – the last two are joined by two sets of accordion doors. There’s a storage room and also a projection room. And of course there are restrooms.  The building is set on a 7409 SF lot, nearly level, with a beautiful courtyard and pergola.  (More info below image gallery.) 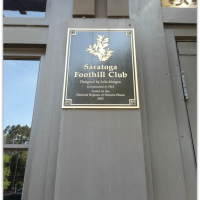 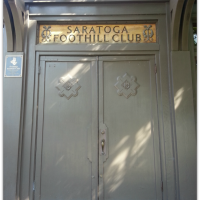 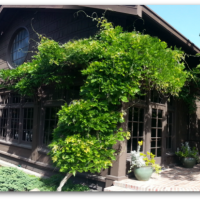 This beautiful building and courtyard can be rented for events today. 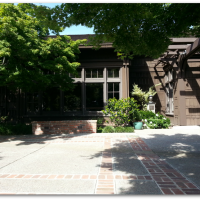 Build largely out of redwood, the Saratoga Foothill Club is warm and inviting 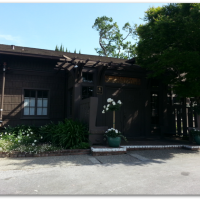 Set near downtown Saratoga, this site fits in nicely with the residential neighborhood. 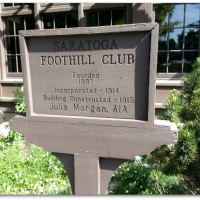 There’s so much information on this club and this building that books could be written.  At this point, we’ll turn to bullet points to make skimming easier! Quotes and info are taken from the registration for historic status or the websites quoted above.

Architecture and Site (mostly from the register form) 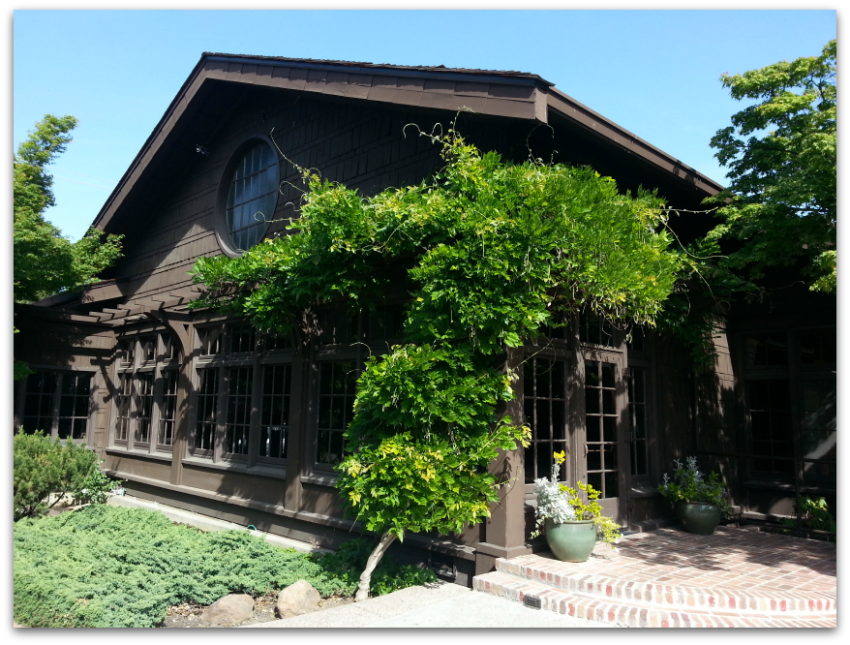 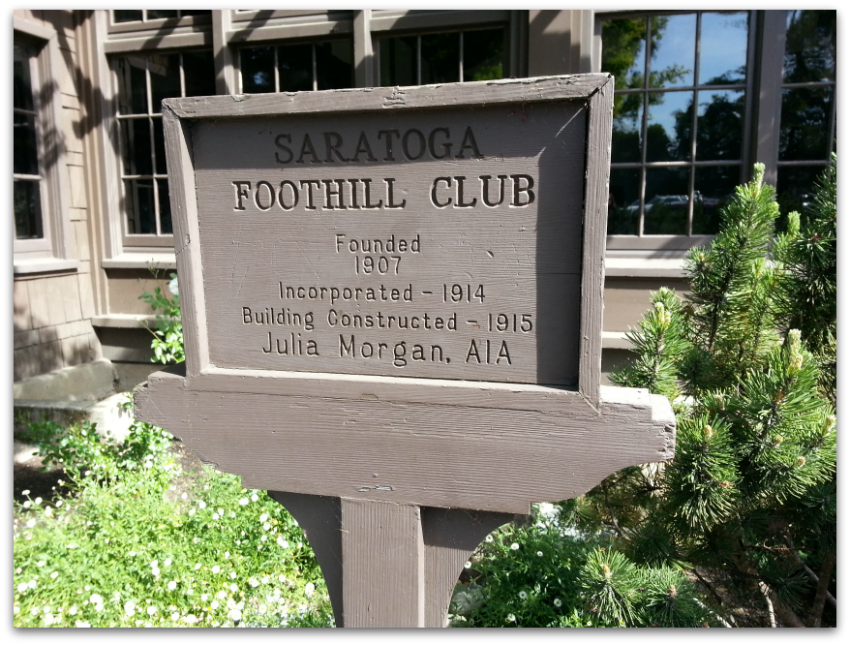