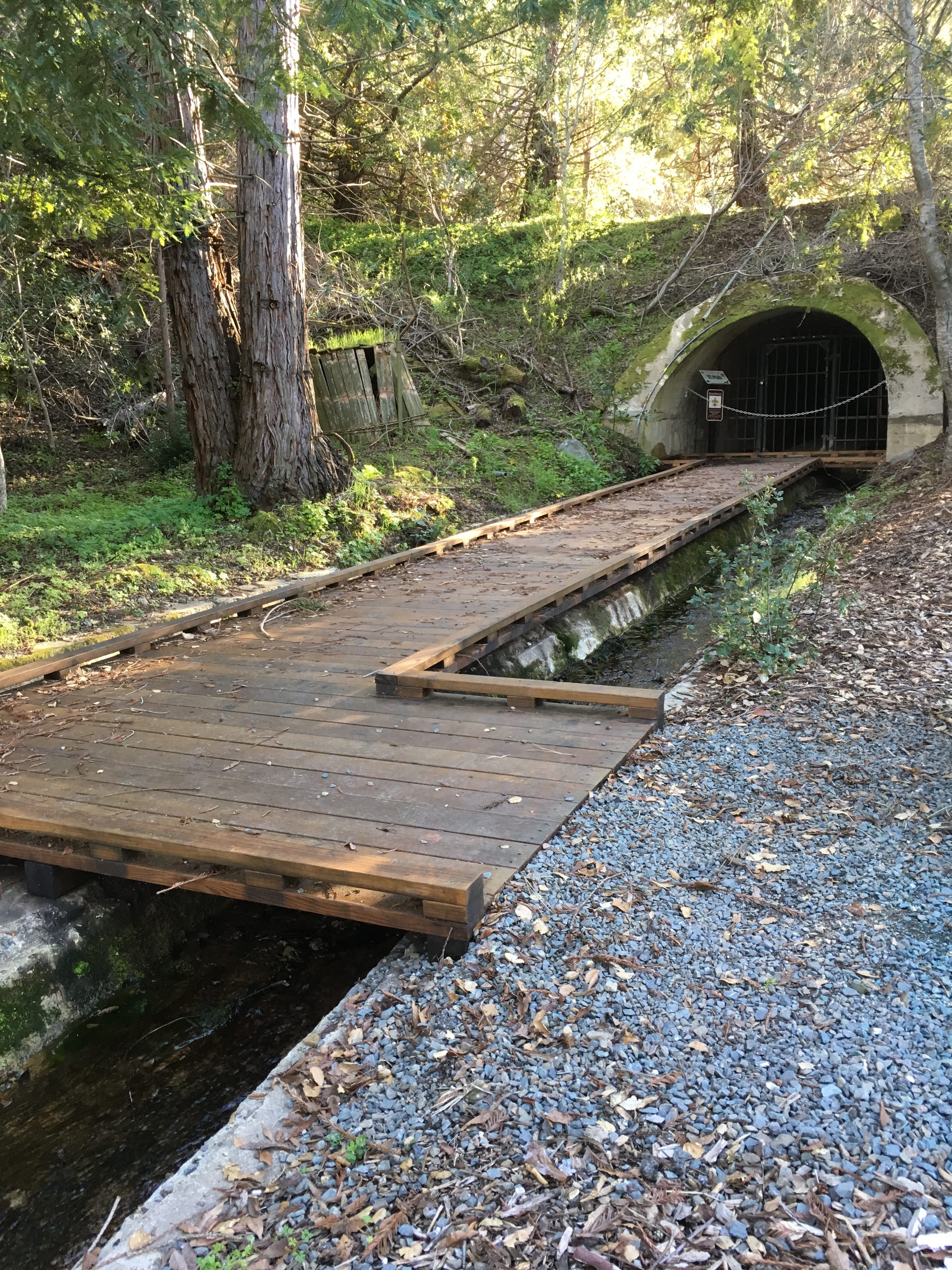 Just east of Hakone Gardens at the edge of downtown Saratoga Village off of Congress Springs Road sits the 64 acre property which is Saratoga Quarry Park.

The site was first used to mine from the hills all the way back in 1856 when it was used to quarry lime for the gold and silver mining industry.

The history of Saratoga Quarry Park 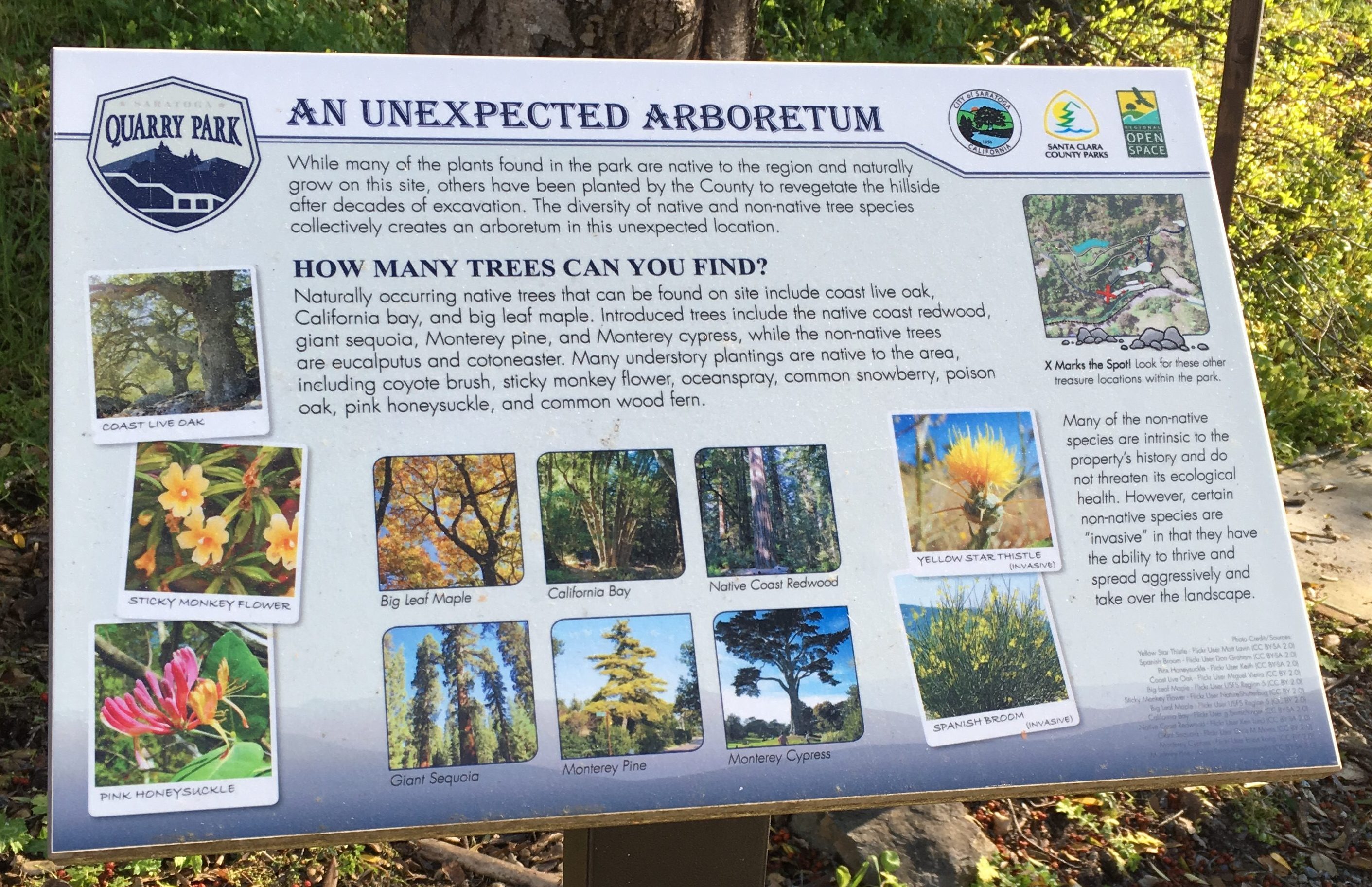 Saratoga Quarry Park was purchased in 1921 by Santa Clara County to extract rock and gravel for the county roads. In 1967 the county stopped using this site as a quarry. Still county property, public workers began to use the location as a recreational facility, with volunteers building picnic grounds and barbeques, landscaping and hardscaping. County employees held parties and even weddings on the site until the late 1990s.

The City of Saratoga purchased the property in 2011 with the intent to develop a park. The park opened with 0.8 miles of trails and picnic grounds on October 31, 2015. Someday, the city hopes to add trails which would connect the Quarry Park to Hakone Gardens and another to the Skyline to the Sea Trail through the Santa Cruz Mountains. 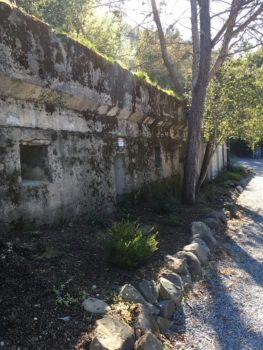 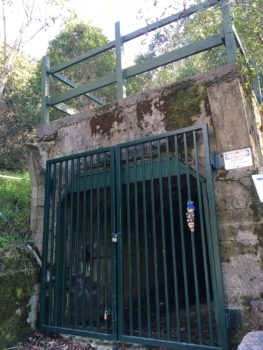 While quarry ridges have been softened and landscapes to return the mountainside to a more natural habitat and prevent erosion, many remnants from the quarry days remain and are even celebrated. Two marked tunnels, though blocked off for entry, have pathways built for visitors to peek inside and learn about the work that was done there. Some old, large gears are now used as decoration, such as axles from mine carts being used as benches. The largest structure is the Old Loading Structure, the concrete remains of the building still standing by the parking lot entrance. Once used to deposit freight into train cars and then into semis, the building now holds large black and white photographs from when the quarry was active. 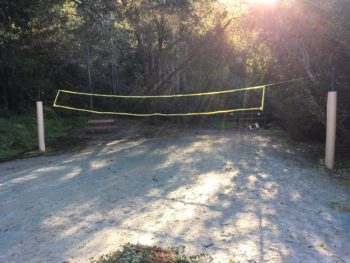 Many of the special features, such as native gardens, boardwalks, and viewing platforms were Eagle Scout Projects from troop 566, added in 2015.

The trails are well marked, built of sturdy gravel, reminding you of the historic use of the land, and vary from fairly level to pretty steep climbs. The map was missing one staircase up to the trails, right around the X on the lower terrace by the picnic areas, which climbed up to the connecting trail and directly onto the also unmarked sand volleyball court right in the center of a path. Extensive picnic grounds, marked and unmarked, make room for parties big and small – just don’t expect to use the old barbecues that are dappled about. They’re out of service for good. And be sure to bring your own trash bag, since most of the trashcans are halfway down the trail from the picnic benches. 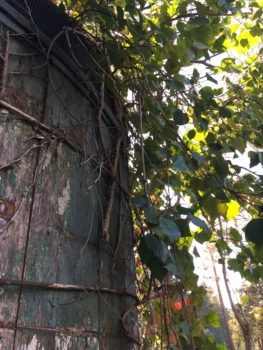 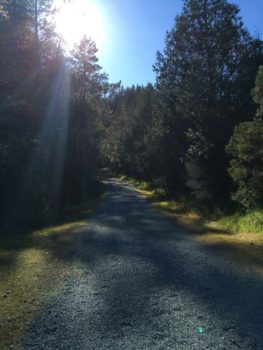 Definitely come after rainfall. It’s only been a week since heavy rain and all of the trees that fell into the path were immediately cut, cleaned, and moved out of the way. The hill was bursting with waterfalls, streams, and percolating hillsides. Even in the summer, there is a natural spring that gushes forth year round from a tall pipe by the main picnic grounds.
The pond is a riparian dream, but don’t expect to see clear water. Frogs, plants, bugs, and birds enjoy the natural habitat, which, intriguingly, changes color from the bright green duckweed floating on one extreme to a rusty colored waterfern, and finally to a darker, clumping algae on the other extreme.

Climb to the highest point on the map and you’ll arrive at the scenic overlook. Two old tanks and one picnic table make for an interesting backdrop towards the mountain. Looking out you can spot Pruneyard Towers and downtown San Jose, but, being in a valley, most of the view is of the neighboring hillside and its vineyards. While scenic, you may want to save your lunch for one of the lower picnic grounds, I recommend the ones by tunnel #2 which are well maintained, private, shaded, and in an alcove off the beaten path. One of the tanks on the scenic overlooked smelled like gasoline (perhaps from the tar coating), there was no shade, and the table was marked. Go to the scenic overlook for the view of the valley and, if you’re lucky, some hawk-sightings. 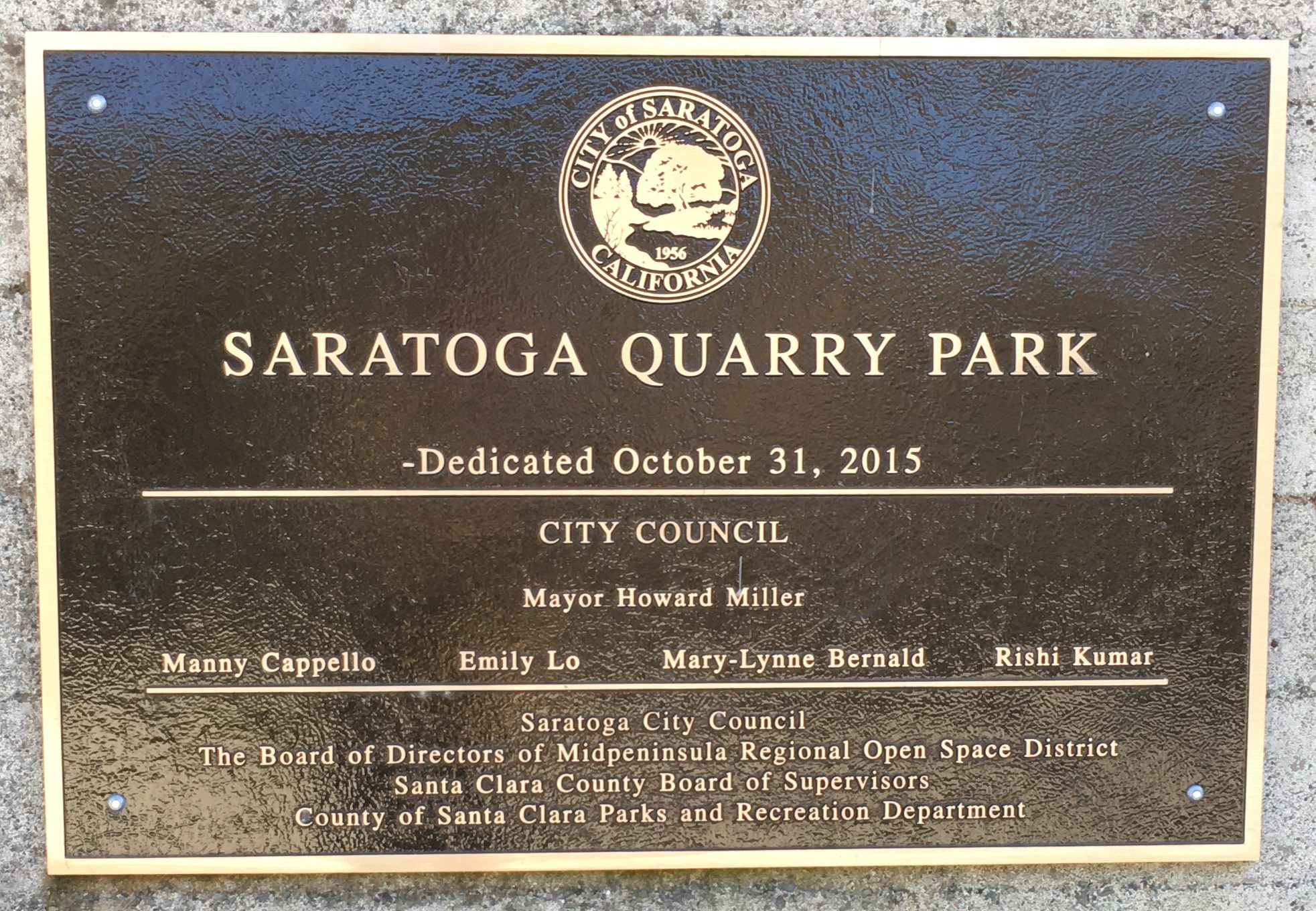 Link is to master plan and planning pages online http://www.saratoga.ca.us/cityhall/pw/projects/csquarry/

Skip to page 7 to begin reading an in-depth history of the site: http://www.saratoga.ca.us/civicax/filebank/blobdload.aspx?blobid=8198

See pictures of construction and some of the historic pictures that are presented in the park through the slideshow in the link. http://www.saratoga.ca.us/whatsnew/quarry_park.asp

Find pictures from the grand opening in the City’s Facebook album:
https://www.facebook.com/pg/CityofSaratoga/photos/?tab=album&album_id=893479030735888