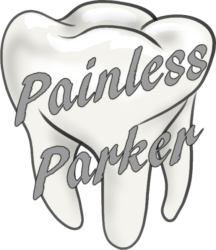 Who was Painless Parker, and why was he so well known in Saratoga, San Francisco, and beyond?

In 1890, at age eighteen he set off for the Philadelphia Dental College (and apparently also studied in NY)  and his career as a dentist began..

He was a renegade dentist in the early 1900s with his flamboyant self-promotion, traveling from town to town with his dentistry show, proclaiming “painless” dentistry and hiring bands to play as he pulled teeth. In one day he pulled 357 teeth!

Dentists weren’t supposed to advertise, and California charged Dr. Parker with violating trade rules by practicing under the false name of Painless Parker instead of using his actual name.  In response, in 1915 Dr. Parker promptly legally changed his first name from Edgar to Painless.

He opened 30 dental clinics in the 1920s — which he called “Painless Parker’s Dental Parlors” — up and down the west coast, at one time employing 240 workers including  79 dentists in 8 states, and it grossed $3 million per year.

It was during this heyday of his that he bought 218 rolling acres off Prospect Road, close to the Saratoga Country Club (as the bird flies).You would know it today as Parker Ranch or the Parker Ranch neighborhood.

Parker died in 1952 at age 80 in San Francisco. He was buried here as Edgar Randolph Parker in the family plot at Madronia Cemetery in Saratoga, the implication being that, while death may have come as a release, it couldn’t be called Painless.

Parker’s son, Ned, followed his father into the profession and practiced dentistry in Oregon.  The Los Gatos Weekly-Times ( April 3, 1996) stated of Ned “It seems he could never pass the examination in California.”

If you find yourself in Philadelphia, you might visit the Philadelphia Dental College, Parker’s Alma Mater, which later was renamed the Temple’s School of Dentistry. The museum is at the dental school, N Broad Street and W Allegheny Avenue. And there you can view the “Painless Parker’s” Bucket of Teeth!