Along the Los Gatos Creek Trail in Los Gatos, Campbell and San Jose, there’s an 80 acre park called the Los Gatos Creek County Park.  This long park includes six percolation ponds, which look a bit like square or rectangular ponds with gravel along the edges.  I passed by one yesterday in Campbell along Budd Avenue near San Tomas Expressway.  It was a pretty sight with the Santa Cruz Mountains in the background.  (This view is looking south toward Los Gatos and toward Santa Cruz and the Monterey Bay beyond the coastal foothills.) 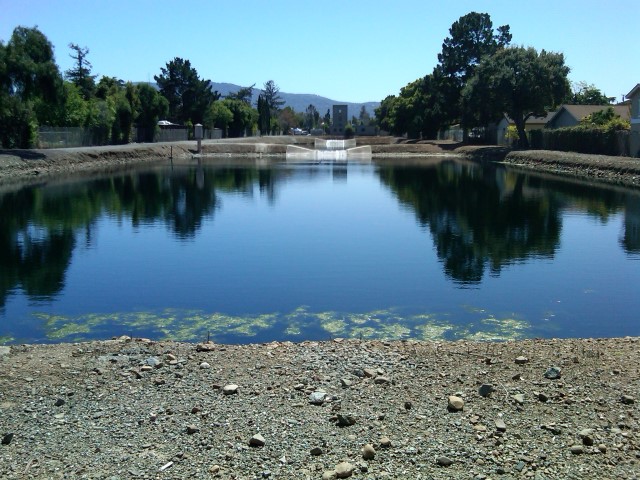 (This photo above got some attention and was featured, with my permission, in a publication by the Santa Clara Valley Water District.)

Next is a view from the back yard of a townhouse I sold a few years ago on Sunnyoaks Avenue. 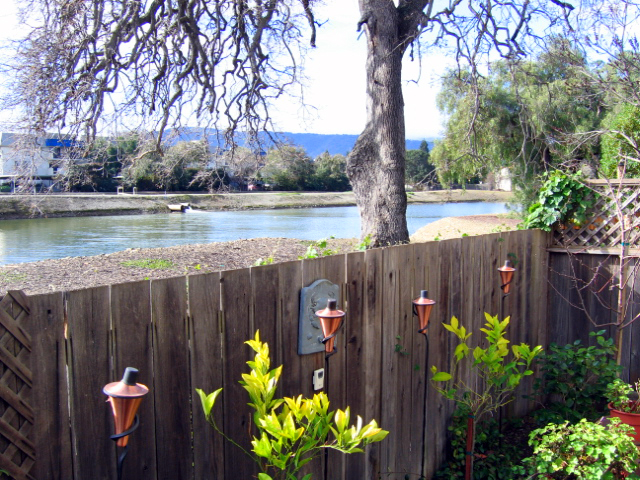 Perhaps you have seen them and wondered what their purpose is?  The series of ponds and waterways enables the rainwater runoff to be filtered and placed back into the underground waterway system, which we refer to as aquifers.  (The Unites States has a number of very large aquifers throughout the country, and the biggest one in California is the Central Valley Aquifer.) 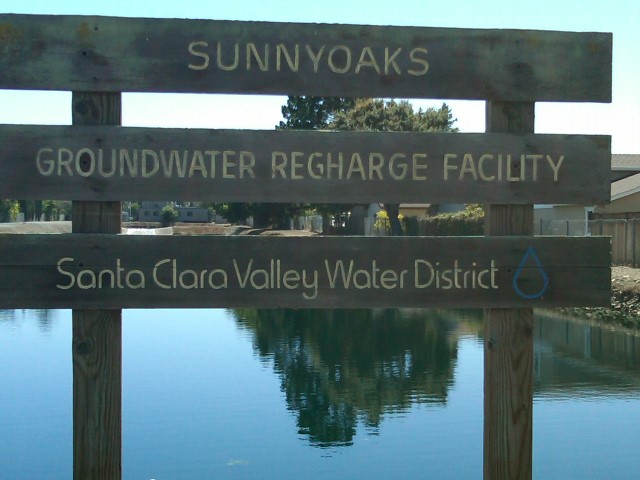 Groundwater levels in the Santa Clara Valley can rise and fall, if left to its own devices, based on the amount of rainfall in any given year.  Willow Glen, a charming part of San Jose, originally was a bit of a marsh when it was first settled by non-natives.  The water which was indiginous to the area continued to flow below the surface, though.

As you know, if you live in Silicon Valley, we have drought years and El Nino (wet) years in addition to our “normal” amount of rainfall, which is 15″ to 25″ a year or so.

In dry years, the amount of groundwater can lessen.  The aquifers can collapse a bit – the ground inches downward.  In wet years, the aquifers can fill.  Our soil is mostly clay here too.  When wet, clay soil expands and is typically referred to as “expansive soils”.  When dry, it contracts.  So the ground was rising and falling due to the presence and quantity of water underneath.

For homes built over the aquifers, the rising and falling and expanding and contracting can wreack havoc on the foundation.

The historic part of downtown Willow Glen is perhaps the best known area for foundation problems in Santa Clara County – the older homes in place prior to the percolation ponds suffered due to the flux of the soil.  The other day I showed a home that was classic in that regard: the floor rolled extensively, the outside of the home had a tremendous number of cracks and even the windows belied the apparent foundation problem.

The percolation ponds and the whole reclamation system recharges our groundwater, which in turn helps to keep the aquifers full so that the ground doesn’t rise & fall to such a serious degree depending on our rainfall that year.   The damage in Willow Glen and other places in San Jose can help to be prevented by this system.   So there’s a really important function behind these squarish looking ponds! (Of course there are many causes of soil instability and this solution does not address many of them. Speak with a licensed civil or soils engineer if you have questions about your property.)

The Santa Clara Valley Water District permits some recreational fishing at one of the ponds, by the way.  It’s stocked with Rainbow Trout and includes other fish too.  Water fowl are visible at all the ponds, but don’t feed the birds as that’s prohibited so that they will migrate as they should do.  (At the Budd Avenue pond there was a sign up stating that there are herding dogs hired to startle non-migrating birds to get them on their way as nature intended too!)

If you’ve never visited the Los Gatos Creek County Park, this makes for a good outing for adults and kids.  Field trips can be arranged and there are other educational opportunities available also.