Selling your home in a declining market

Things in the greater Silicon Valley real estate market are shifting right now, with downward pressure on pricing in some segments of the market. In other places or price tiers, prices are level, or possibly rising a little. It’s still pretty red hot in Santa Cruz County, but cooling generally in Santa Clara and San Mateo Counties. The Los Gatos condo market is definitely feeling the chill.  What do you need to know or do if you’re selling your home in a declining market?

There are a two principles which are important to understand.

The first truth to grasp is that all real estate statistics are yesterday’s news.  Homes that are closing escrow today most likely were negotiated 4 weeks ago. That was last month’s market.  Looking at comparable properties that sold 2 months ago is really a reference to the market conditions of 3 months ago. What is most relevant can be the hardest data to obtain, and that is what has gone under contract yesterday or at least within the last week or so. When you cannot get the pending info, it’s helpful to piece together the sold info chronologically.

We don’t know what August’s numbers will be like yet, but there’s a good chance that they will be lower than July’s.

Second, it’s important to try to determine where prices are headed and to get ahead of the curve, if possible. This is easier said than done, of course, because it’s never a straight line up or down, but something with a lot of variation. (It is also true for buyers in an appreciating market – they have to jump ahead of the curve to bid high enough to get the home, not offer where the current comps are selling.)

Here’s a chart of single family home sales, average prices and median prices in Santa Clara County since 2009, to demonstrate this fact:

Looking at this graphic image, it would seem as if the “big picture” is a consistent upward movement. However, there are a lot of downturns within the general upward trend. Our current “down” movement may well rise again in the new year, as many local real estate economists predict. That’s not certain, though, and many real estate market corrections begin slowly, and instead of reaching the old peaks, start reaching smaller ones, rising and falling to a different tempo. It can seem slow enough, but you cannot tell while it’s happening if it’s suddenly going to drop like a nightmarish roller coaster. During the Great Recession, we had a lot of ups and downs, but one outlandishly steep slide.  I created this graph below on the MLS, and later added the red lines to make the January in each year clear, as most years, prices begin rising in February (sales in January). Please note that despite the recession, prices usually rose in early spring 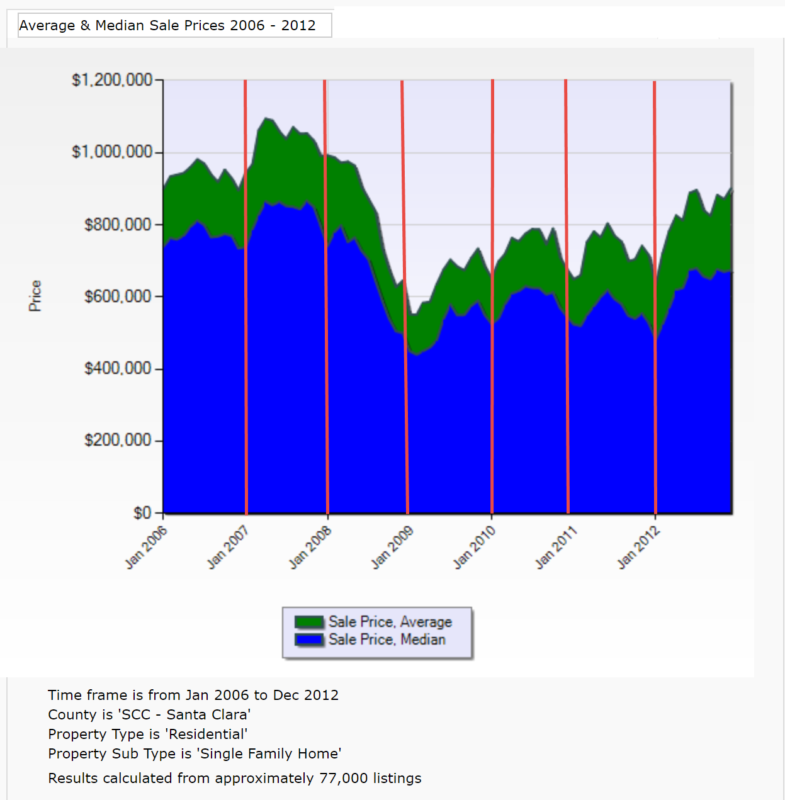 As you can see, except for the steep declines in 2008, there were plenty of peaks and valleys during the 2006 to 2012 years. Even in 2008 there’s an upward blip and I think it’s fair to say that many of us thought that the market was going to start to recover at that point – or at least hoped so. After that little tick up, though, it continued its downward movement. We very much felt the dip in pricing in late 2010 through early 2011. Looking back, it may not seem so bad now, but at the time, we had thought the housing correction was over, and that decline was a nasty deja vu. And please notice the low points in each year – usually they are in January (think sales in December). Jan 2012 was lower than January 2011 or 2010, and was close to 2009.

I do not believe that anyone expects a correction of that magnitude in our lifetime again, but it would be foolish to say that anything cannot happen.

The pattern, though, can be unpredictable. Some slides are long, slow, and fairly consistent, as in the 1989 to 1992 correction. Other times, things can drop like a rock, as with the dot-com bust in 2001.

Either way, if you are selling your home in a declining market, price accordingly to mitigate damage and get ahead of the curve.

You cannot tell ahead of time if the falling rate of values will accelerate, slow down, or go flat, but you can see what has happened in the last 6 months or so and try to determine the rate of change.

So what is a seller to do – sell before it gets worse, or hang on until it gets better?

What do you believe it is that we are experiencing now? Is it a seasonal blip, or the beginning of a trend?

If you believe that the current market conditions are seasonal (that is my thinking since Silicon Valley still has so much hiring and demand), then if your home is in one of the cooling areas, selling now is a mistake, because many home buyers are concerned about over-paying. If you believe that spring 2019 will bring better prices, then I would suggest holding off on selling and focus on getting your home into TOP SHAPE so that you will fetch the highest possible price when you do sell, whether early in 2019 or at some other time.

If you believe that the market is at the initial stages of a market decline (and nationwide, the real estate market seems to be cooling), then you have to decide if you want to sell now or wait until the market hits another peak. 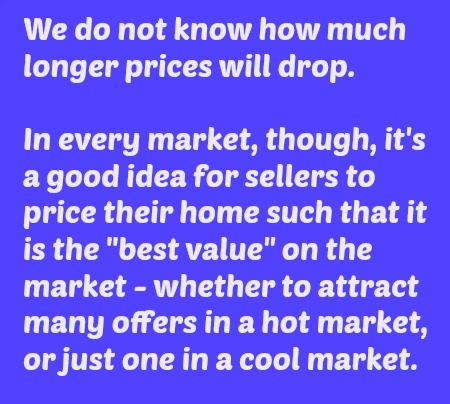 If you must sell now, and you have softening prices in your area and pricing tier, then you must be realistic that you are going to be selling your home in a declining market. It may not be declining next year, but it has been declining since March for most of Santa Clara County, and buyers have been paying attention to that fact.

Many areas are still seeing overbids, but they aren’t as high as they used to be (the average sale price to list price ratio was 105.6% for Santa Clara County in July 2018. Back at the peak, and now, sellers who want their homes to get the most attention under-price it a little to get multiple offers and overbids.

Even in a seller’s market, I do encourage my sellers to price their home to be the best value – a strategy that normally results in the best results. Additionally, do the repairs that might scare buyers off. Keep in mind that they are afraid that as soon as they buy, their new home will be worth less, so they do not want to have to put money into the home to fix things such as electrical work, roof leaks, etc. Make sure you hire a great Realtor who will help to get your home into top showing shape, and will market it widely on the internet with professional photos, and market it well in person with quality fliers. Newspaper ads and post cards seldom bring buyers to your door, but a well placed Facebook ad may. Make sure you see the MLS printout and have any errors corrected. A second set of eyes on all of the marketing is a good idea – in a cooling market more than ever.

Selling a home? Watch the hidden messages you give out!

Sellers should leave during showings

The three greatest temptations for sellers in a raging hot market