Silicon Valley Home Buyers: Should You Use a Buyer Broker Agreement? 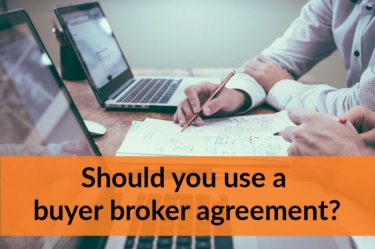 My Realtor colleague and blogosphere friend, Elizabeth Weintraub, has a great article on this topic on About.com,  Buyer’s Broker Agreements & Buyer’s Broker Contracts, in which she explains the various types of buyer contracts and agreements which are commonly found around the country. The one which is used the most, if one is used at all, is the “exclusive representation” (which again is similar to a listing agreement, which is also usually an “exclusive representation agreement”).

Why use a buyer broker agreement?

Why would anyone want to use a buyer contract?  Whether you’re the consumer or the agent, the answer is pretty much the same: to have options. In my real estate practice, I do not request nor require a buyer contract as long as my buyer client is willing to purchase something from the selection available on the multiple listing service (MLS).  If that isn’t enough, though, then we chat about the buyer’s options.

When there aren’t enough homes on the MLS which match the buyer’s needs, it’s time to go beyond what’s currently available, meaning past listings which are no longer available (listings which are withdrawn, expired or cancelled), or those not yet on the market.  It also means researching unrepresented sellers (either those saying that they wish to sell “for sale by owner” or those who may not have considered selling at all but might if the right offer presented itself).

Without a buyer broker agreement, an agent might contact homeowners in the above categories, but most likely would not share the information on those homes with the buyers because there is no provision for the agent being paid, which is of course important since this is the agent’s business and livelihood.   In those cases, the agent would only show the property if the seller agreed to pay compensation should the showing resulted in a sale.

With a signed buyer broker contract, an agent can show any property and share any information with the buyer, whether the seller is willing to pay a commission or not.  In other words, the buyer literally has more choices because the agent is able to be free with the information, knowing that he or she will get paid if the buyer purchases one of those homes.

What are some of the concerns around an exclusive buyer broker contract?

Buyers have two main issues with buyer broker agreements: one is being “locked in” to an agent who may not perform (this is a worry that sellers have too) and the other is being forced to pay a commission in order to buy a home.

(1)  Buyers and seller both worry that if they sign a listing or buyer broker agreement, they might get stuck with a dud of an agent who’s not performing and of whom they can’t easily be rid. Most real estate agents and brokers would release a client who’s unhappy “no questions asked”.  Some, however, won’t, and I’ve known one or two who wouldn’t, so this is a reasonable and fair concern which should be addressed.

Contracts with agents include a space for “other terms and conditions“, and I usually have an easy exit clause inserted there so that my client can cancel the agreement as long as we’re not in contract on a home already (there are a few, rare exceptions in which I won’t use that clause – but almost never is that the case).  I was happy to see that Elizabeth mentioned this in her “about.com” article too.

(2)  The other worry is the fear of having to pay the commission.  Most of the time, the home buyer will still purchase a property in which the seller pays the commission.  Even in “for sale by owner” offerings, many times the sellers will offer a certain amount (percent or flat fee). If the seller won’t pay, it can be added onto the cost of the home – with that view, buyers can decide if it’s still a good deal or not. Often if the property is not on the MLS, it’s not getting the traffic so will sell for less – meaning it should still be a good deal in many cases.

Let’s see what the buyer broker agreement says (this is from the California Association of Realtors form, called “BUYER REPRESENTATION AGREEMENT – EXCLUSIVE”) in terms of compensation.  First, there is no one way of paying (by amount or commission) – there are various ways of compensating your real estate agent: by commission (percent of sales price), by flat fee (a set dollar amount), or some other way (via addendum: this could be hourly, part commission and part dollar amount, or a combination of all three).  Talk about options!  Without this agreement, there are no compensation options – only whatever is offered in the MLS. (Paragraph 3 of the agreement.)

There are “protection clauses” (which is also true of listing agreements) and a time frame .  Next, “who pays”:

There are many other terms and clauses in the 4 page agreement. I’m not allowed to publish the contract here as it’s copyrighted.

So let’s give an example – commissions are not fixed by law and there is no “normal” number but there are ranges of numbers which are more common than others.  Most often we do see commissions offered to the buyer’s agent in the range of 2.5% to 3%, though I have seen amounts as low as flat fees of $500 and even a flat fee of $1 and commissions as high as 6% or over 3% plus a “bonus” of several thousand dollars.

For our example, let’s say that the agent agrees with the buyers that the minimum commission acceptable would be 2.5%.  If the buyers want to purchase a home in which the price is super low, but so is the commission, they could opt to do that.  The seller would pay whatever was offered in the MLS, and if it were less than the 2.5%, the buyers would make up the difference. If their agent negotiated a great deal for them, they might do the math and decide that even if they did chip in some for the commission, they were way ahead.

Now let’s change our example and say our agent has a higher minimum, but will give any overage back to the clients.  In this case, our hypothetical agent says 3% is the minimum, but if the commission is higher or there’s a bonus, the buyer will get it. So a home that’s offering 3.25% and a $5000 bonus to the selling agent (agent representing the buyers) would rebate everything over the 3% to the buyers.

These are only examples of how the buyer broker agreement could be used, not what is done or not done.

Let’s take a moment and think about this in reverse, though.  What do you think happens when a higher or lower than typical commission rate does to the showings of a listed home?  Do you think a property with a $1 commission is going to have a lot of agents wanting to show it?  How about one with a high commission or a bonus?  As someone who also works with sellers, I can tell you that a higher commission rate does increase the traffic to a listing.  As a buyer, though, do you want your home selections to be seen through the filtered lens of compensation? Or would you rather your agent not worry that he or she will make more or less from one home to the other?  Perhaps…just perhaps removing the bias of the better compensation is truly in the buyer’s best interest!

There are many more clauses in this contract, of course, but in this post I wanted to address the two main concerns.

Is the buyer broker agreement a terrible form, a trap for buyers? I don’t think so.  I see it as another option which should be offered to buyers.  Unfortunately, when I mention it, often buyers recoil at the sound of it – it has a serious PR problem.  I suspect that I just need to work on explaining it better (perhaps this post will help).  Sellers do not shy away from listing agreements, and buyers could be equally comfortable if they understood that having more options actually benefits them as much as it does their Realtor.  The trend in real estate sales is toward providing consumers more choices, more options.  The buyer broker agreement is a step in that direction.  Buyers may still elect to forgo this option, but I think it would be a mistake to act as if it didn’t exist, or worse, that it’s a bad idea.

Do I have to buy the house from the Realtor who showed it to me?

What happens when inspectors disagree about the property?

How often should you get a termite inspection?