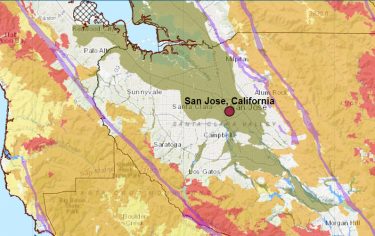 The Silicon Valley liquefaction zones cover much of the Bay Area and Santa Clara County, but the risks are often not well understood or investigated. We know that this is earthquake country and tremblers are to be expected. But what difference does it make where you live or work – won’t the whole valley be shaking equally?

Well, we’re Realtors, not geologists or geotechnical engineers, but we can share some resources that may help answer these questions and provide avenues for further research on this topic.

Liquefaction refers to the ground becoming liquified, or fluid. It takes 3 ingredients to liquefy land: loose sediment, water, and strong shaking. This loose, saturated soils when shaken to a certain point no longer behave like a solid and can slide, open, and swallow anything above it.

In 2010 and 2011, New Zealand experienced this and it made worldwide news. The Science Learning Hub website states that “During the Canterbury earthquakes of September 2010 and February 2011, liquefaction caused silt and fine sand to boil up and bury streets and gardens and caused buildings and vehicles to sink.”

But I never heard about that happening during the 1906 quake, or the 1989 quake – that means it’s not a risk here, right? Wrong. The USGS Liquefaction and Sea Level Rise explains that a relatively dry rainy season in 1906 lowered the liquefaction risk, and the 1989 quake happened near the end of the dry season when groundwater levels were at their low point. There was liquefaction from both of these events, but it could’ve been much worse.

Silty, sandy soil will respond very differently to bedrock and clay in the case of extreme shaking. So no, the valley won’t all be shaking equally in the case of a large tremor. Liquefaction hazard zones will likely get the worst of it. That’s why this designation matters so much.

What is a liquefaction zone?

After the Loma Prieta earthquake in 1989, the Department of Conservation, California Geological Survey created maps to make residents aware of areas in which there are increased risks from earthquake shaking due to landslides or liquefaction and to make sure that construction in those zones have extra investigational requirements to build safely. The liquefaction zones are noted by the state to be more susceptible to dangerous liquefaction in the event of an earthquake. You can learn more about these and related issues at the California Department of Conservation’s website.

When you buy or sell a home in California, one of the reports shared by sellers is a Natural Hazard Disclosure, which includes information on whether or not a property is in a liquefaction zone.

There’s no nuance to these government zones: the property is either in or not in the zone of required investigation.

Below is a snippet of the USGS map (screenshot on 2020) on that page with a few annotations from me, and the key overlayed. The zones’ risk, from highest to lowest, is red, orange, yellow, green, and white.

It’s a bit of a pain, as you need to download and then extract compressed files, and they keep moving the maps around so they’re difficult to find. Right now (October 2022) you can find an interactive version of this map at the USGS site from earlier on Liquefaction and Sea Level Rise. The major challenge, after all of that, is finding landmarks. If you zoom in enough on the interactive map you might find a couple of major streets named, but it’s certainly not easy to read! 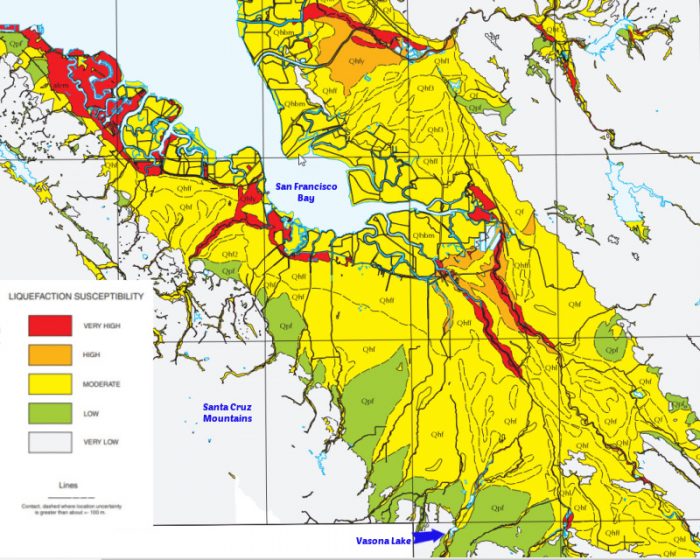 Silicon Valley liquefaction zones: Has it happened here before and what are the chances of it happening again?

During the Loma Prieta Earthquake of 1989 many areas including parts of San Francisco, Oakland, and Santa Cruz experienced major liquefaction damage, but liquefaction damage in Santa Clara County was not reportedly as severe (at least not from what I’ve found). That quake registered a 6.9 on the Richter Scale and was considered a strong quake – but not a major one, amazing as that may seem to anyone like me who was here for it.

Larger earthquakes have happened, though, and could again. In April 1906, the famed Great San Francisco Earthquake hit a magnitude of 7.9, a major event, which was about 16 times larger per the U.S.G.S than the Loma Prieta. That one also had disastrous liquefaction in the city. The Great Quake continued for much longer, too: 45-60 seconds for the San Francisco quake and just 20 seconds for the Loma Prieta (it felt longer!). Bigger still have been recorded in North America in Alaska at 9.2 and in other regions of the world as high as 9.5 per the U.S.G.S.

In Christchurch, New Zealand, there was severe liquefaction with a quake smaller in magnitude than our 1989 shaker, but it was close to the surface. In 2018 Palu, Indonesia suffered something even worse – a 7.5M quake triggered both liquefaction and landslides, which then combined and amplified the spread and severity of each: the Petobo liquefaction flowslide.

What kind of liquefaction would occur if another 7.9 quake hit? What about an 8.5 or higher? Or if it hit during a wet rainy season? The Association of Bay Area Governments have published rough maps of a few scenarios based on which fault shakes for earthquake liquefaction risks around the Bay. There are many variables that could affect risk, but in the end we can’t predict what would happen for certain. Hazard zones exist to bring awareness and reduce new risk variables, so they’re certainly worth paying attention to.

Where are the Silicon Valley liquefaction zones?

Loose sediment and water are the first two components needed for liquefaction, and we can find those across much of the Bay Area.

Most low-lying areas (low elevation) made up the bottom of the San Francisco Bay many centuries ago. These ancient coastlines and ocean beds tend to have silt soil, and being closer to sea-level they often have high water tables. Similarly, areas where the Bay was filled have water close to the surface and soft, freshly moved earth. Liquefaction areas also tend to follow rivers and creeks, both perrenial and seasonal, in small bands close to the banks of the water where sediment is deposited by the flow.

The Silicon Valley liquefaction zones are shaped almost like a funnel stretching from the Bay and tapering inwards toward South County – but they stop before getting to Morgan Hill, San Martin, and Gilroy. Much of San Jose, and I believe all of Santa Clara are in liquefaction zones where just 200 years ago the valley’s natural landscape had wet meadows and marshes from the waters flowing towards the Bay (Historical Ecology of Western Santa Clara Valley).

As you move closer to the hills on the east and west sides of the valley – especially on the west – there are more pockets which are out of the official zones.  For example, the elevation in Santa Clara is 72′. In Campbell, which is mostly out of the zone, it’s 200′.

There are many natural hazard zones to consider in addition to the liquefaction zones. The mountains may be free from liquefaction worries, but they can have earthquake faults, landslide areas, and often are a high fire hazard danger. Other parts of the county may be in 100 year flood plains or in areas likely to be inundated should a dam or levee fail. A great resource that I’d encourage you to check and bookmark is the California My Hazards Awareness site. Please just remember that like most sites, it will report the liquefaction issue as “in or not in” the zone.

1) Should I buy outside the hazard zone? If so, how far?

Over the years, many clients have asked us if they should worry about a proximity to this or that natural or environmental hazard. Every home purchase involves compromises, so the question goes back to the buyer: is this a compromise you’re willing to make? Most of the time, home buyers will need to do some research so that they can make a confident, educated decision. I had one client who was so worried about liquefaction zones that she and her family moved to Sacramento! (Sacramento isn’t free from liquefaction risks, either.) For others, the risk elicits a shrug with the sense that if most of the valley is in that zone, what could be done?

2) Does being in a liquefaction zone impact resale value?

Not that we have seen.

3) Are homes in Silicon Valley liquefaction zones built to withstand the shaking?

The mapping act of 1990 may have created stronger regulations for homes built after that time for those regions, but houses and condos built pre-1990 do not seem to be differentiated in their construction whether in or out of those zones. Newer construction has better engineering for seismic safety than older homes unless the older ones have been retrofitted, but that’s true wherever you are in the state.

The average Silicon Valley single family home was built between the 1950s – 1970s, so most homeowners have these older homes, and most survived the Loma Prieta quake of 1989 without major structural damage or loss of life. Again, it’s best to do your own research here and determine your risk aversion.

4) Can you tell if a home is in the liquefaction zone by looking at or touching the soil?

No, it’s the soil deeper than what you can see which is the issue. Studies are made with the California Geological Survey periodically to check and map the zones, and the boundaries can change if the survey suggests it’s appropriate.

Waterfront homes in Silicon Valley: are there any concerns? (on our relocation site, Move2SiliconValley)