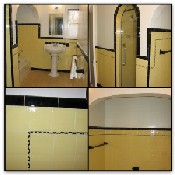 A couple of years ago I had the pleasure of working with some past clients in purchasing a home in downtown San Jose’s Japantown neighborhood.  Their street is full of bungalows and  gracious 1920s or 1930s Spanish Revival style homes. With a wide road and an enormous “sidewalk strip” and beautiful trees, just a look down the street is like a look back in time.

The home that my friends bought had a lot of wonderful  exterior touches and a few interior ones that are reminiscent of the era.  (This is fun real estate to see and sell!)  A walk into the bathroom, though, really just takes your breath away if you love older, historic homes.  In this post I’ll share a few large photos of this very cool, classic tiled bathroom and indicate why a bathroom like this is so special.  Please continue on to see several photos!

First, here’s a look at the room as a whole – at least most of it is visible here: 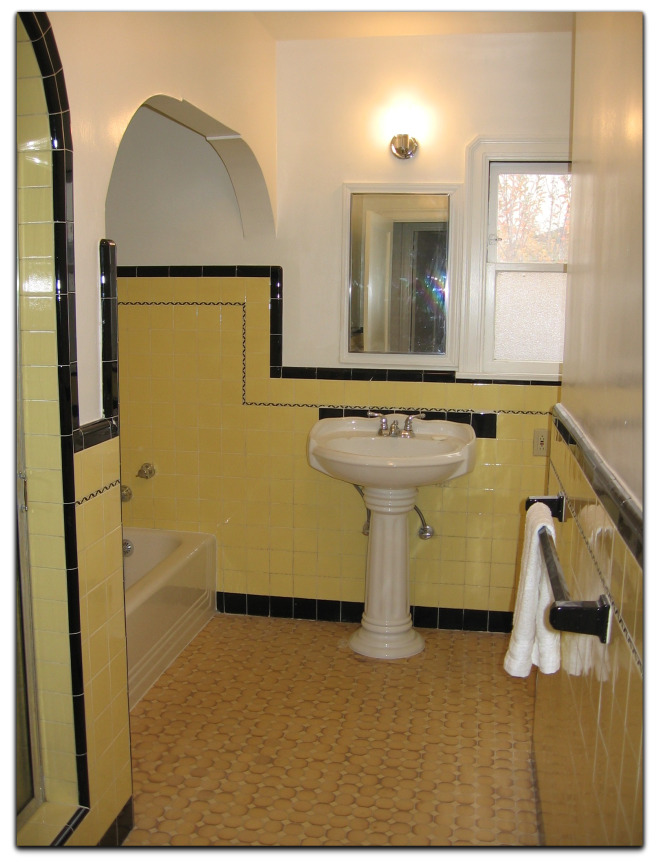 This room is 99% as it was initially built. The toilet is off to the right, by the window, in its own small cove.  Please note the abundant use of tile in this room!  The floor is intricately tiled, the walls are also extensively tiled, and there’s a strong use of tile to define the elements of the room (shower, tub, etc.)   One change, though: originally, there would have been a wall sink rather than the pedestal sink here – thus the row of black tiles as a backsplash by the current sink.

Now let’s have a closer view of the different parts of this beautiful bathroom.  First, a look at the tile trim.  The almost Moorish design is very typical of Spanish Revival homes, and the builder found a way to weave it into the bathroom plan without it becoming overwhelming. Luckily, after almost a century, it is still in near perfect condition. 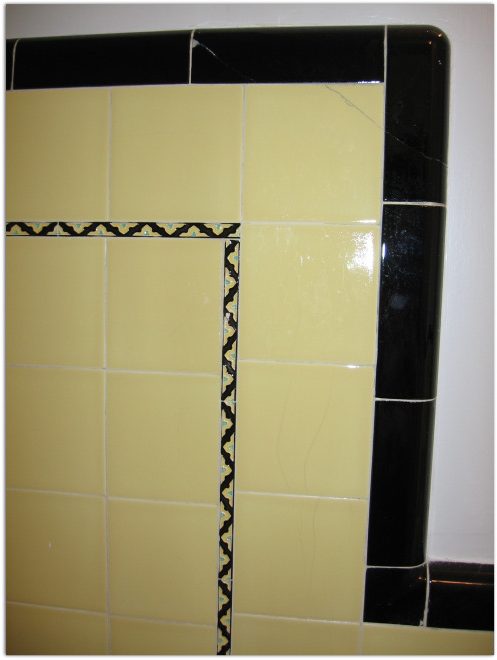 Now the floor.  No easy, large tiles here!  Instead, it’s as if the tile were woven into the floor. This was very labor intensive and is as much an art as the work of a trade. 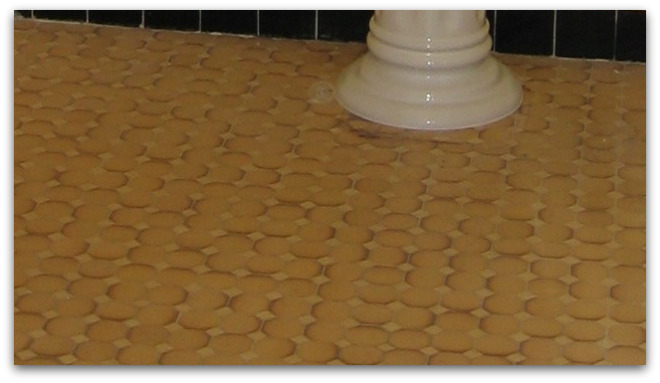 And now the arch by the bathtub. In today’s homes, there would be no arch or sense of enclosure.  Here, though, the builder didn’t just create an arch, but made it a scalloped arch – again a hint of the Moorish style love of shapes is here in this bathroom. 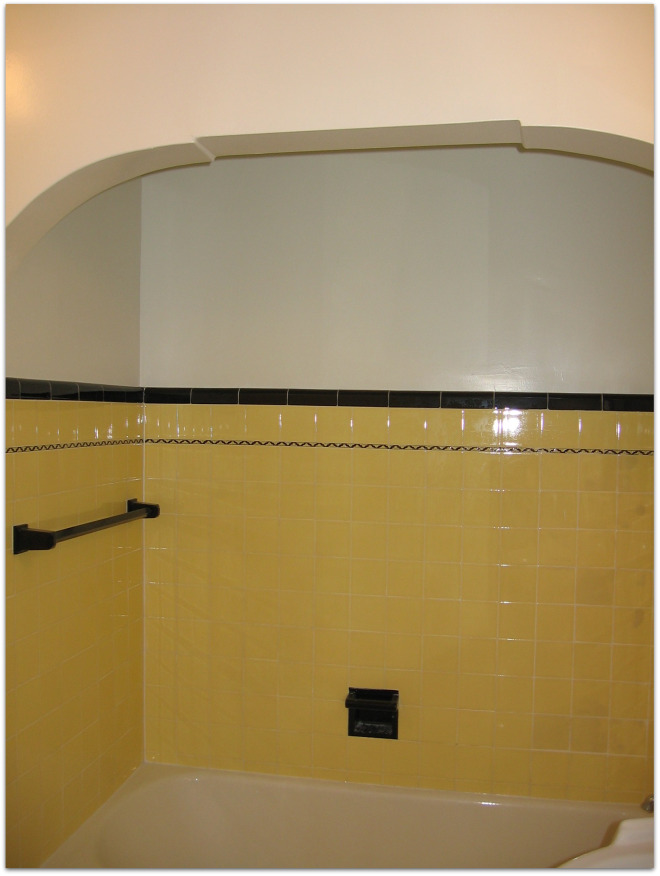 Finally, the shower enclosure.  Again, this was not designed for mere functionality and was not built expediently. Rather, this shower stall was crafted with extra effort to create a fully tiled  arch here as well.  The detail is well beyond what was necessary to make a shower, and to have tiled an arch could not have been the work of a tile apprentice. 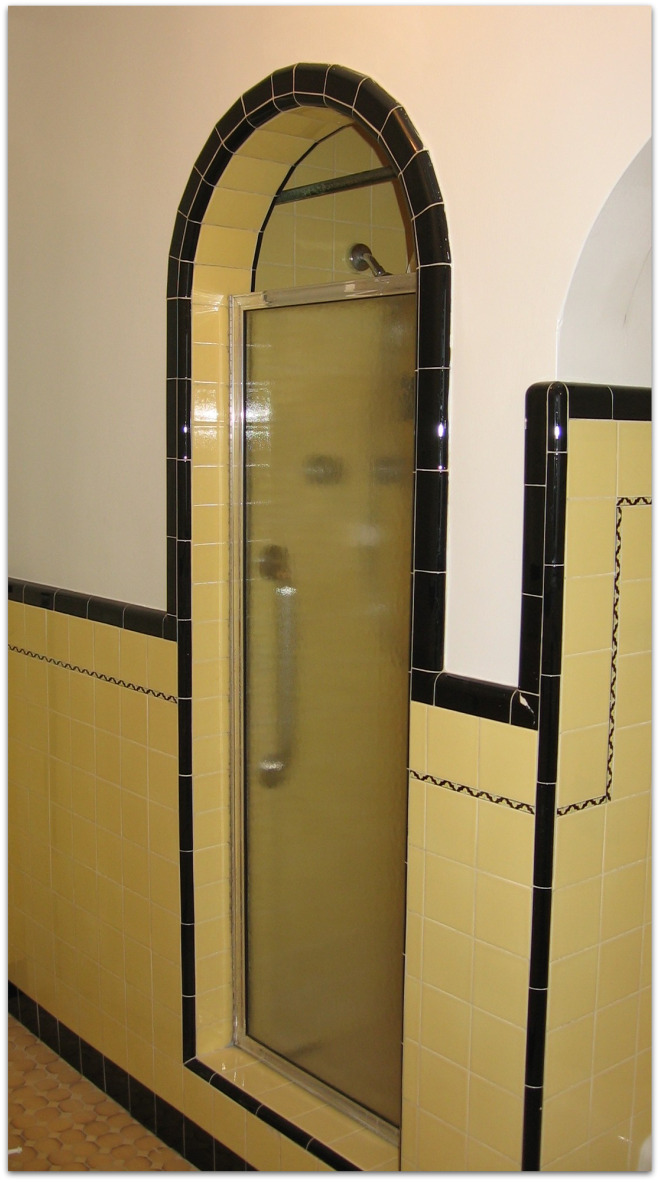 In the shower you notice one other modification for usability: a grab bar. Other than that, though, it is very much as it was originally constructed.

This magnificent bathroom was built for both style, functionality and form.  It is a tribute to the builder and to the tradespeople who created it that nearly a century later, it is still prized.   With so much effort, and countless years of service, it continues to work well and is perhaps appreciated today even more than when it was first built.