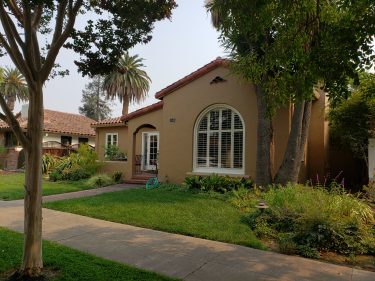 A home with many Spanish style elements on Ayer Ave in the Vendome district of San Jose near Japantown.

What makes a house a Spanish style home?

There are actually a number of more specific designs that might fall under this umbrella term. Some of these include Mission or California Mission Revival, Mediterranean Revival, Moorish Revival, Territorial or Territorial Revival, Pueblo Deco, Monterey Colonial, Colonial Californiano, and Mexican Style, but most frequently the term “Spanish Style” is used to describe the Spanish Eclectic or Spanish Colonial Revival architecture. We’ll focus on these last two as they are the most widely found designs and most of the Spanish style homes in the South Bay fall into at least one of these two categories.

Before we jump in any further, there’s a lot we can learn from these names. Revival styles draw on the look of a past era, which in this case is the Spanish colonial-era architecture of the far and south west found in historic adobes and the missions. This architecture is a reimagining, not a reproduction, of something vintage through a contemporary form. These are “eclectic” styles because the architecture does not follow any strict rules of design. Instead, it combines features of various styles, replacing or mixing elements for taste and functionality to become a kind of hybrid design.

What does this mean for the average homebuyer / homeowner? 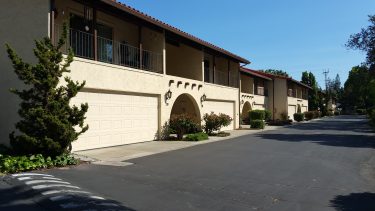 Spanish style townhomes of the España Oaks community in Los Gatos. (Click for more on this townhome community)

Spanish colonial revival architecture has been around for over a century, adapting to contemporary tastes since around the 1890s. Of course, tastes change and there are decades where the style was more popular. Here in the Bay Area you will likely find most Spanish style homes built around the 1910s – 1930s and from the 1970s – present day.

Because they follow an eclectic design, you will find they can be extremely diverse, readily adapting to various floorplans and tastes. For instance, many of the 1980s built Spanish styles are in a ranch style, the early 20th century has plenty of Spanish style bungalows, and you can readily find everything from multi-story townhomes and condos to expansive celebrity villas in a Spanish style. The flexibility of this style is one of the main reasons why the Spanish style has held its popularity for so long. It’s also part of the reason people get confused about what makes a Spanish style! 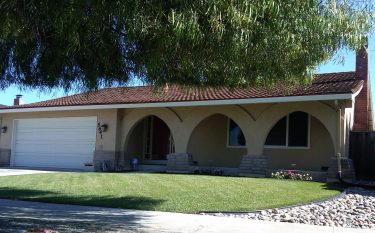 A Spanish and ranch style home in Blossom Valley.

These elements can range from minimalistic to maximalistic and be rendered as simply or ornately as desired.

Homes in this style are typically wood-built and covered in stucco, with drywall (or lathe and plaster, depending on the age) interior walls. They are usually built low to the ground with the main floor only a step or two above ground level. 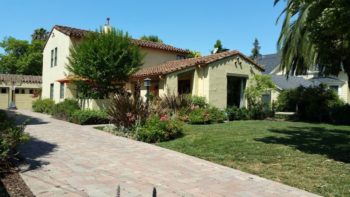 So where can you find Spanish style homes locally? Just about anywhere! Most subdivision developers offer a few designs for homebuyers to choose from, so many areas that were built up from the 1900s to today have offered and built Spanish style homes. Since the architecture has remained popular and is readily adapted, it’s common to find custom built homes in this style as well. There aren’t many (if any) areas where the entire neighborhood is uniformly Spanish style, however there are areas with a higher volume of Spanish style homes. And you might run across homes that used to be Spanish style, and as the fashions changed, was restyled into something else.

Looking at the available Spanish style homes currently listed in Santa Clara County on the MLS, it’s showing homes in practically every municipality, built between 1924 and new construction for 2021. Most of these properties were built between the 1920s-30s, the 1970s-present. This covers Spanish style single family homes, condos, and townhomes. 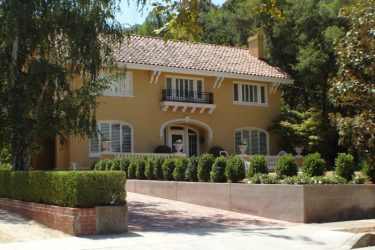 A quick little aside. Some people are particular about distinguishing Mediterranean style homes apart from Spanish style homes although they have many elements in common and frequently borrow from one another. If you’re confused about the difference, here are few of the features that (especially when found together) suggest you’re looking at a Mediterranean style and not a Spanish style home: symmetry, rarely single story, keystones, no courtyard, quoins, Palladian window, few to no arches.

Spanish style homes are smattered throughout Santa Clara County. You can find them in Gilroy Morgan Hill, and much of San Jose. If you love the historic 1930s or so style, you will have success in Alum Rock Park (particularly close to the golf course), Willow Glen, downtown San Jose (especially in Japantown and the Vendome areas), the Rose Garden neighborhood, Santa Clara (esp in the Old Quad area), Los Gatos, Palo Alto, and smaller pockets throughout the valley.

If you’re just starting out or you’re the lucky owner of a Spanish style property in the South Bay area head over to my article on the beautiful Spanish style homes available in Silicon Valley. That post talks a little bit about the style and suggestions on where to find it locally, including a live map which updates with available and recently sold listings from the MLS.

Ready to buy or preparing to sell a beautiful Silicon Valley home? I would love to hear from you! 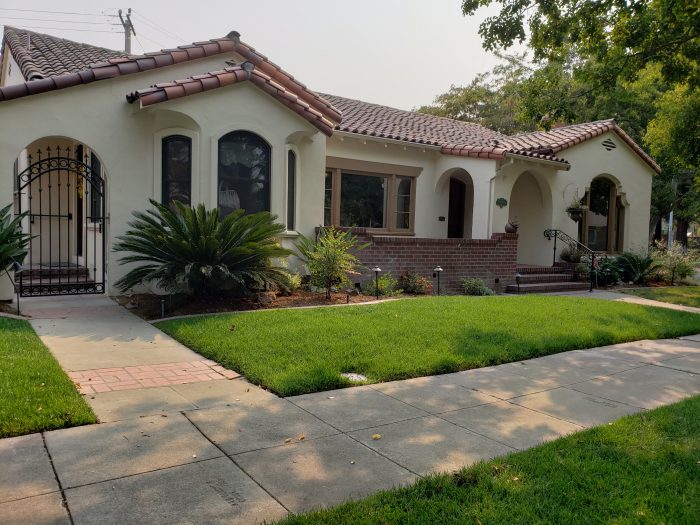